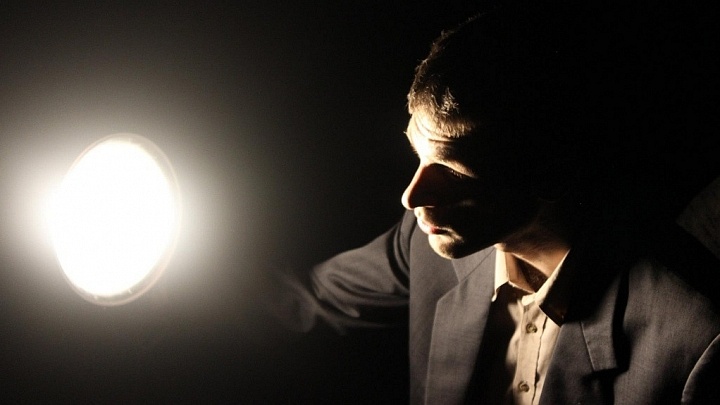 The DARTcritics class is back in session! Our 25 budding theatre critics tested their critical skills on local St. Catharines company Stolen Theatre Collective’s production of House by Canadian theatre darling Daniel MacIvor. Here’s a taste of what they thought. Welcome, DARTcritics class of 2017/18! 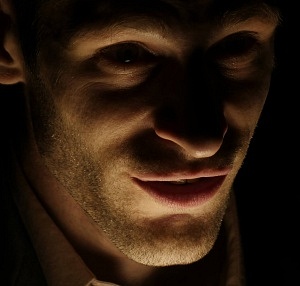 Described as a “one-man comedy nightmare,” there is no better way to sum up House. Stolen Theatre Collective’s production toys with your mind, breaks the fourth wall, makes you sympathize with the lead character, and yet, leaves you feeling rather unfulfilled.

Immediately upon arrival at the theatre, you are made to feel confined in the small space, “trapped” with the other audience members in the world of the play. Queen’s greatest hits plays while you wait for the show to begin, and this is the first strange and unexpected part of House. At the showing I attended, many audience members were singing along, myself included; however, the cheery demeanor we all shared was quickly shattered when the show started, and Victor came out onto the stage.

Played by Colin Bruce Anthes, Victor demonstrates his knowledge of being within a play from the very beginning. He commands the lights, tosses chairs, and stares at the audience before delving into what can only be described as a rant about nothing. As a costumer, I immediately noticed his ill-fitting suit and his lack of socks paired with loafers, and knew this character was… odd. No person in their right mind would pair loafers without socks. That is unfashionable, and uncomfortable.

While there are few traditional “scenes” in House, Victor carries on a one-sided conversation, complaining about his life, recounting past events, and explaining his torment and desire to be something more than what he is. He is such a mundane character, it is easy to relate to him, and anyone who has ever attended group therapy or even an AA meeting would easily see themselves in his place. That is, at least until he starts to get into specifics about his life. He is a man who has spent a good portion of his life working in the septic tank industry, after following in his estranged father’s footsteps to appease his depressed mother. Victor is stuck in a loveless marriage to his second cousin, and has yet to be noticed by anyone outside of his therapy group.

However, Victor is a very unreliable narrator; as he jumps between fourth wall breaks, regular conversation, and mental breakdowns, we are unsure if any of what he is saying is true at all. It’s rather unlikely, even in the world of a play, that his mother is possessed by a demon, and his father runs off to join the circus, but we as an audience have to take his word for it. The play ends with Victor talking about a time where his friends and family turned into birds and lifted him up in the sky, and he never clarifies if it was a dream or not. It ends abruptly, with Queen’s “I Want to Break Free” slowly fading in. While this was effective, I did want to see more, I wanted to know more about his psyche, and thus, the abrupt ending left me feeling rather unfulfilled.

Like Victor says, however, “If it makes you feel something, it’s creative.” And House was just that. A very creative, nightmarish look into a non-neurotypical person’s life. 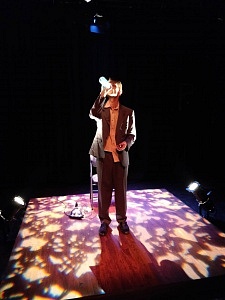 A weary, intimidating person approaches. They look physically drained yet something about their wide, tired eyes says they are bursting at the seams, ready to stir up any conversation. They have dealt with personal chaos, and are itching for anyone to hear them out. No, you are not waiting for your drink by the bar at St Catharines’ Fiddler’s Pour House. This encounter with a troubled, but intriguing stranger is brought to you by director Danielle Wilson and Stolen Theatre Collective’s House, written by Daniel MacIvor and starring Brock University graduate Colin Bruce Anthes.

Stolen Theatre Collective, the St. Catharines company that brought Gyllian Raby and Danielle Wilson’s original production of The Ash Mouth Man to life last year, boasts experimentation with various theatrical styles to deliver unique theatrical experiences that belong entirely to the live stage. House is no exception. The Robby, a small venue situated behind the Folk Arts Centre on Church St, makes it feel as though the audience is in for an exclusive treat. Once inside, the intimate thrust stage houses a small audience and sets up for an extravagant, roughly chopped up tale told in interwoven portions by the enigmatic Victor, amusingly portrayed by Anthes.

House is the story of Victor’s life, a character that upon entering can be immediately recognized as a no-nonsense man, if throwing away some chairs is any indication. As Victor dives in, he takes the audience through palpable waves of emotion. He can transform from the coworker who stops you to gossip by the water-cooler, to a vile monster you wish you had never met. It is this unwavering magnetism that throws the audience from moments of sheer comic delight to daunting silences as Victor progresses in his story about his parents, his sister, his wife, and how he lost his house. The delicate use of sound cues and contrasting red and blue lights are created meticulously by sound designer Max Holten and lighting designer Fede Holten. This gave Victor’s speech extra flair, though a performer of Anthes’ caliber could deliver Victor’s powerful tale on his own.

In the Trump era, where we are accustomed to consistent shock and continually stripped of hope, it is easy to identify with Victor’s nightmare and lack of control over his circumstances. Victor takes us through deception, fear, and loss. Wilson describes Victor as a “Beckettian figure, he fails miserably, tries again, fails again and fails better”. Victor comes off like any tormented patron at your local bar; his rant can either be encouraged with a cold pint or tamed with a glass of water. 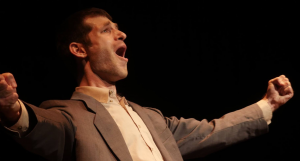 A house is more than a home in Stolen Theatre Collective’s production of House by Daniel MacIvor. The one-man show, starring Colin Bruce Anthes as Victor, is the inaugural production at its venue The Robby in downtown St. Catharines. The relatively small space coupled with a modest set-up gives Anthes all the playing room he needs to captivate the audience.

From the start, Anthes has everyone’s full attention. He steps onto the small platform of a stage, where a folding chair we have become accustomed to in the 20 minutes pre-show sits. He inspects the chair before promptly tossing it – along with our expectations – off stage right, into the curtains. After pulling out several more folding chairs, he settles on one and the “sit-down-stand-up nightmare”, as the play calls itself, begins. From then on, we are locked in to a rollercoaster ride through Victor’s haunted house of a life.

What starts out as an anecdotal rant spirals into a complex narrative in which everything, except Victor’s life, comes together.

Anthes’ alluring performance holds the show together despite several alienating elements in the production (elements that usually keep the audience from fully suspending their disbelief and force them to remain actively critical of the events). Many of the lighting fixtures are not only visible but front and centre in the show, even manipulated by Anthes at times. And yet, this compliments the mood and action such that it is easy to forget that you are in a theatre – and not inside Victor’s head as he recounts the moments leading up to how “fucked up” his life has become (his words, not mine).

In fact, it is only when Anthes commands the house lights be turned on begins to walk around the audience that I remember myself and 25 other people had bought tickets to see a play and are all sitting in the theatre witnessing an experience. The minimalistic lighting design by Fede Holten evokes a sense of immersion in each moment without distracting from the action, setting the tone. House’s blend of metatheatrical production elements complimenting Anthes’s performance certainly makes a home for itself at The Robby. 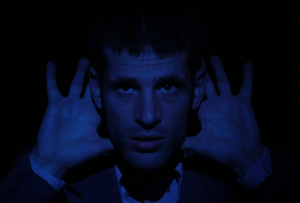 From the moment the lights dimmed, the house was full of a rare anticipatory energy. No one was sure why chairs were thrown from the stage, or what else might be thrown at us during the course of the evening.

The final part of Daniel MacIvor’s solo-actor series, House is the ranting of Victor, a septic tank salesman with a serious axe to grind with everyone in his life, from his boss, to his wife, his family, and his therapy group.

Founded in part by Danielle Wilson, the director of House, Stolen Collective has staged both original and non-original work for a decade throughout St. Catharines. The piece fits well within Stolen Collective’s body of work, which centers on immersing and interacting with small audiences, and creating artistic experiences “unable to be reproduced” beyond the stage.

And they certainly deliver – Victor starts by thanking the audience for not staying home to watch TV. This is not the safe option, and our risk is the foundation for a superb performance.

House is performed in St. Catharines’ newest theatrical venue, ‘The Robby’, and the atmosphere is more like a basement comedy club than a theatre, allowing a too-close-for-comfort interplay between stage and audience. The lighting and sound are commendable, produced respectively by Fede and Max Holten-Anderson, and are executed with precision by James McCoy from an almost invisible booth, concealed behind the wall of black curtains surrounding the simple set.

However, it is Colin Bruce Anthes as Victor that makes House a do-not-miss event. Anthes is a staple across all avenues of St. Catharines theatre, and for good reason. From the instant he walks onto the small platform stage, the house is gripped by his determination and his conversational tone – we are being watched as much as he is.

With the constant, almost casual destruction of the fourth wall, the mood is one of delighted tension – when Anthes speaks a line to me with the decisive point of a finger, I freeze in my seat. It is an essential, yet neglected component of theatre: the ability to connect.

The performance heralds a bright future for a community whose local talent suffers from proximity to larger cities and festivals. In a moment where theatre is continuously proclaimed “dead” or “uncertain”, House furiously says it lives. After sitting in the house of The Robby, I am inclined to agree.