Tearing it up in St. Cadmus: Twitches and Itches’ The Bacchae could not be more topical 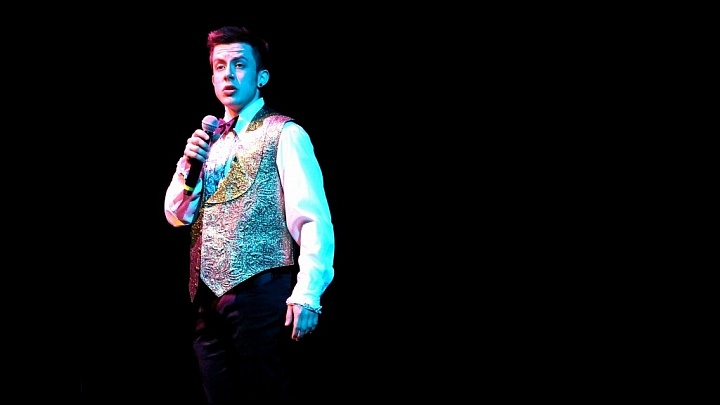 On Thursday January 19th 2017, the night before one of history’s most controversial U.S. presidential inaugurations, St. Catharines’ own Twitches and Itches theatre company took to the Robertson Hall stage at the First Ontario Performing Arts Centre with an engaging, critical theatrical reimagining of Euripides’ The Bacchae.

Originally written in 405 BC, The Bacchae focuses on Dionysus, the Greek god of fertility, wine, theatre, and ritual madness – specifically his quest to bring his new religion to the people of Thebes. Denied the legitimacy of his divine birth, Dionysus seeks retribution from king Pentheus, who denounces the god and strives to halt the madness that has taken over his mother and sisters, and save his crumbling kingdom.

Adapted by the ensemble and directed by Colin Anthes, The Bacchae: Or How to Give Birth to a Dancing Star places themes of isolation, a crumbling society, and the breakdown of societal norms at the forefront of the story. D (Dionysus), played by Iain Lidstone, is a self-proclaimed “rock messiah” come to liberate the people of St. Cadmus (sound familiar?), enticing them to join him on the outskirts of the city with wine, music, and promise of freedom.

Meanwhile in the city’s core, Pentheus (Eduardo DiMartino) is in a growing state of psychic disarray as the weight of his people’s strife bears down on him. Underemployment and class tensions are increasing, creating unrest. While the plight of his people pulls him in one direction, the menacing Commissioner Horsher (Sean Rintoul) urges Pentheus to take violent action against D and his followers. The Commissioner’s influence on the onstensible leader probes the audience to ask who truly is in power.

The ensemble, composed of Lidstone, DiMartino, Rintoul, Hayley Malouin, Sean McClelland, and Kaitlin Race, use only a long red rope and some black wooden boxes to create this unstable world (design is by David Vivian). The dynamic set changes executed by the ensemble give the impression that the city itself is alive, writhing and reacting to the events of the play. The rope plays a crucial role in presenting a visual divide: Pentheus’ authoritarian city of St. Cadmus vs. the fringes. The actors use movement, a capella vocal pieces, and and radio DJ voiceovers as methods of story telling. The radio broadcasts gradually shift from themes of consumerism and the “duty of every woman to spend more than she can afford,” to a somber plea from Pentheus’ people to save and protect them. Accompanied by dramatic and often eerie lighting configurations, scenes such as the blind prophet Tiresias (McClelland)’s vision leaves the audience with an ominous glimpse into Pentheus’ grim future. As she grips a single pale light focused on her face, the hands of the ensemble can be seen clawing to consume her features.

Malouin offers a stand-out performance as Agave, Pentheus’ mother. She takes a character who, in the original text, is so consumed by Dionysian madness that she murders her own son, and presents her on a complex emotional and mental journey. She delivers a chilling monologue at the end of the play, a recollection of a terrifying nightmare in which she felt trapped, held captive, and silenced by a towering giant. Prior to the murder of Pentheus, Dionysus introduces her as a strong, socially conscious, and rational character, something we don’t see in Euripides’ original text.

DiMartino’s portrayal of Pentheus is compelling, turning a traditionally tyrannical character into a tragic hero. From his emotional recollection of his grandmother in the opening scene to his redemption speech and finally his feminine transformation and acceptance of his bleak fate, watching this complex character develop is a spectacle within itself.

While this production has been three years in the making, there is no denying the parallels between the polarized society it presents and the current global political unrest as a result of events across the border. We need theatre and the arts now more than ever, and Twitches and Itches offers a production that not only brings to light social and political injustices, but questions and analyzes how they came to be.

Tags: Colin Anthes•Euripides•The Bacchae•Twitches and Itches Theatre
OlderPlaying at Shaw across the generations: DARTcritics meets female members of the Festival’s ensemble
NewerWe are not alone: The Company Theatre’s “John” takes your breath away