See It While It’s There (Before It’s Gone): “There/GONE” at FringeTO 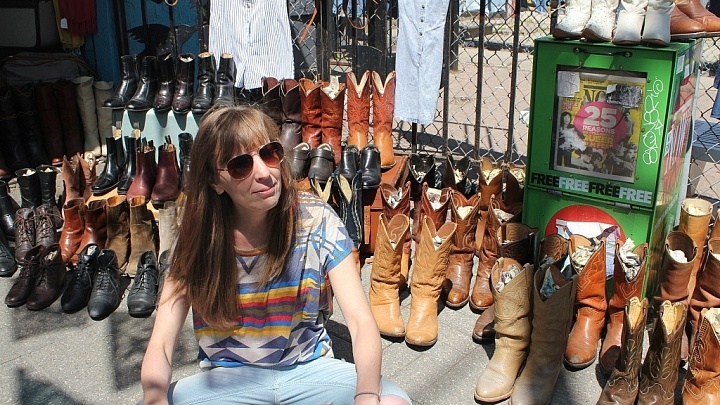 FRINGE AUDIENCE PARTICIPATION:
When I tell you, find a nearby object– it doesn’t need to be significant— and hold on to it. If you’re reading this on-the-go, please do not grab a stranger or their belongings. Okay, go ahead. I’ll wait. (Musical interlude). Are you holding onto your object? I hope you are. Examine it. Give is a hug/kiss. Great. Let’s continue.

There/Gone, created by Discord and Din Theatre, is a risky show that blends monologues and performance art while plucking at heartstrings in an honest and powerful way – if you let it. The show is set in Flashback Vintage (a vintage store in Kensington Market) and takes advantage of every inch of the space, from the dressing rooms to the front desk. It screams “FRINGE!!” in the best ways possible.

The story is simple enough: A man (Michael Reinhart) embarks on a faraway journey. The man falls in love with a woman (Thomas McKechnie). They get married; the love turns to heartbreak; the end. Jenna Harris acts as our tour guide throughout the story, taking us from moment to moment. The three-person cast gives a strong nuanced performance, and the trio balance each other out perfectly. There/Gone is unique, however, because the story comes second to the experience of witnessing the events unfold.

Still have your object? Good. Put it aside and walk ten feet away. That feeling of separation is a small example of what one would experience as an audience member.

Let’s talk preservation. This theme – the preservation of relationships, memories, artifacts, love – runs rampant throughout the show and is both heart-wrenching and magnificent. In particular, the scene between the three characters where Jenna does everything she can to keep the lovers’ relationship in tact took me through a grand emotional journey (think the opening scene from Pixar’s “UP”). The show ends on an image so powerful that I won’t dare spoil it. (See the show. Stay to the end. Even if you don’t get what it is, you won’t forget what you saw).
Now, walk even further away from your object. Feel that feeling of separation again? How would you describe it in words?

The creative team made a very smart choice: by using performance techniques that do not describe the story or its message in great detail, it can portray complex feelings which are inherently indescribable. No word, phrase, song, or poem can describe the need to reclaim what is lost, and this show honours that reality. Additional text would hinder the production. The audience experiences the show’s central idea: humans have things in our lives that are there, and then they are gone, and try as we might we can’t preserve them.

The lack of defined narrative in the story can cause the occasional hiccup, specifically regarding Thomas’ character. I have no issues with a cis-gendered male finding love with a male in drag; however, much of the story implies that Thomas is a cis-gendered woman – she gives birth to a baby in the story. Casting a male to play a female character in 2015, when there is an abundance of highly talented female performers, is highly problematic. The questions around Thomas’ character do not detract significantly from the overall experience of the show, but they do exist.
Some might find There/Gone vague and sentimental. I admit, as someone who leans towards the logical and loves narrative, this show caught me off guard in the beginning. But, if you give in to the atmosphere and don’t overthink it, this show can provide one of the richest and most rewarding experiences at this year’s Fringe.

(3) about something besides a man – NO

There/Gone DOES NOT PASS the Bechdel Test.

However, There/Gone DOES pass the Vito Russo Test on LBGTQ representation.

(1) The film contains a character that is identifiably LGBTQ. – YES

(2) The character must not be solely or predominately defined by their sexual orientation of gender identity. – YES

(3) The character must be tied into the plot in such a way that their removal would have a significant effect. – YES

Tags: Discord and Din Theatre•FringeTO•There/GONE•Toronto Fringe
OlderJem Rolls Is a Gem: “The Inventor of All Things” at FringeTO
NewerA Hilarious Triumph of Affinity, Family & Taboo: “Morro & Jasp Do Puberty”