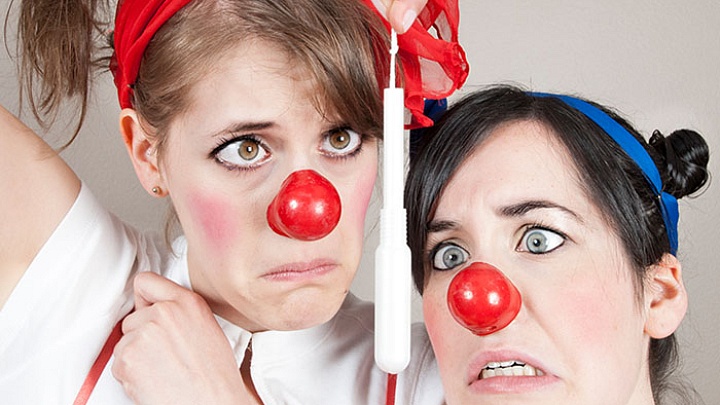 While reading this, eat a bag of Cheetos (or other cheese-flavoured crunchy junk food). If you disagree with a point made in the critique, feel free to throw food at the screen, or partake in the eternally delightful comedy classic spit-take.

The immature Morro (Heather Marie Annis) and the mature Jasp (Amy Lee) are two teenage clown sisters who suddenly experience a burst of puberty—and right before the school dance! Morro is having her first period and is experiencing a wide range of emotions. Jasp is insanely jealous of her sister because having a period is a sign of maturity and adulthood, and she knows that she is far more mature than Morro. Also, Jasp’s crush on the school hunk is leaving her with brand new feelings about boys.

The show is hysterical. The jokes appear naturally, frequently, and from a real place. Morro and Jasp are delightful and lovely people. The humour is sharp, well-timed, and surprisingly varied – it isn’t all one note. With a blend of wit, tongue-in-cheek, sight gags, gross-out humour, and pop culture references, there is something for everyone – including the men. Yep, fellas, you too can see a show about hormonal clowns and not feel left out.
Let’s talk taboo. I expected the show to tip-toe around the subject of puberty, mentioning it only as an idea, but Morro and Jasp get their hands and clown noses dirty. Between the bloody underwear puppet shows and awkward sexual fantasies with stuffed dolls, the show goes to some very dark places and you cannot help but laugh. The play also has a lot of light-hearted and sentimental moments, particularly when we see the two act like loving sisters. I also left the show surprisingly educated on some of the finer vocabulary of feminine hygiene, including the gross plastic sound of a pad being opened and Toxic Shock Syndrome. In short, the show was so funny, my ears hurt from the laughter and applause from the audience around me.

I have one issue with the production, and it is an odd one: this isn’t a Fringe show (commence Cheeto-throwing). This isn’t a fringe show; not really. To me, fringe theatre is unconventional and not mainstream. It’s risky, weird, exciting; to be “on the fringes”, as it were. “Morro & Jasp” are published authors, award-winning clowns who are fresh from a Factory Theatre Mainstage production (the wildly successful 9 to 5). They are beloved by so many and are part of the Toronto theatre community. You know their work will be amazing. Their work IS amazing; their show is wonderful. See it. See it twice, if you can. (The show is going to the Edinburgh Fringe Festival. Fly to Edinburgh and see it for a third time). I don’t intend to chastise them for their successes and it doesn’t make the show bad theatre, but it may be too professional for the Fringe theatre-goer who is looking for a show which is less mainstream and polished and more “on the fringes” as the festival suggest.

That being said, Morro & Jasp Do Puberty is a hilarious and joyful experience. Period.
The Bechdel Test:

(3) about something besides a man – YES

Morro and Jasp Do Puberty PASSES The Bechdel test