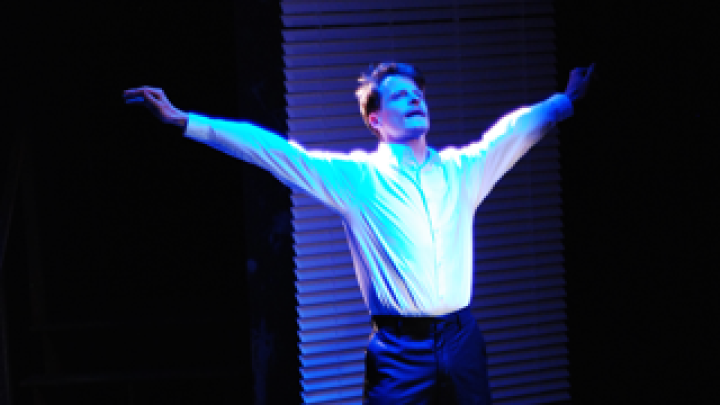 The DARTCritics recently saw Essential Theatre Collective’s production of Wings of Wax, written by Lindsay Price and directed by Moncia Dufault. Reception by the critics was so conflicted that we couldn’t publish less than three reviews. Here’s what Kevin, Alex, and Nikki had to say:

To turn the impossible upside-down: Wings of Wax, written by Lindsay Price and directed by Monica Dufault, tells the story of how prolific Canadian bank robber Ken Leishman did that very thing. This Essential Collective Theatre production stars Joshua Stodart and Emma Mackenzie Hillier as they live the lives of two restaurant co-workers and friends, Dan and Tee.

Dan is captivated by a scrapbook he stole from his father which contains newspaper clippings of all the articles surrounding “The Flying Bandit – Ken Leishman”. Feeling down and complacent in his life, Dan finds solace in admiring this man. The admiration Dan shows strikes a chord with Tee, and they begin acting out the story of Leishman’s escapades. Dan hopes to prove to Tee that Leishman is worthy of admiration, while Tee hopes to prove the opposite.

Moving between the lives of Dan and Tee and portraying the bank robberies and life of Ken Leishman, Stodart and Hillier play a variety of different characters, ranging from Ken Leishman himself, bank managers, police officers, witnesses, and accomplices. Through all the scene changes, back and forth between reality and storytelling, Stodart and Hillier fly comfortably between characters. Hillier does her best to portray male characters but the vocal changes takes away from her usually strong acting. Aside from that, the two work well under the direction of Dufault as they transformed the space into the world of whatever story they were telling.

This wouldn’t be possible without the set design by Jacqueline Costa. The almost-monochromatic, dull space set the mood for Dan’s life, and allowed for a wide range of quick and easy set changes. He lives in what Tee calls a “hole in the ground”, evident by the stairs going up, raggedy looking blinds hanging around the stage, and a milk crate next to his chair. The blinds cleverly hold multiple uses, such as actual blinds, a cover for Dan’s chair, and a projection screen.

Kasia Smuga designed the projections, which usually consisted of images of newspaper clippings in Dan’s scrapbook that assisted in the storytelling – which at times felt out of place and unnecessary. The colourful shapes that appear near the end seemingly have no purpose and contrasted against the aforementioned gloomy set.

Telling two separate stories is no easy task, but playwright Price manages to complete the task. Dufault and the rest of the crew create a space for Stodart and Hillier to work their magic, and make discoveries.

Like the mythological Icarus who flies too close to the sun, Wings of Wax by Lindsay Price and presented by Essential Collective Theatre delivers thrills but ultimately gets singed by it’s own ambition. Recently graduated and still living with his mother, Daniel (Joshua Stodart) spends his days fantasizing about Canadian criminal Ken Leishman and trying to convince his down-to-earth friend Tee (Emma Mackenzie Hillier) of his greatness when she questions his obsession. Director Monica Dufault brings us the story through a number of theatrical styles that are notably meta-theatrical (referencing the play within a play) and physical. The constant change in forms keeps the play up in the air and makes it truly unique.

The highlights of the production are, however, found in the talented production team that give it the wings it needs to fly. Video designer Kasia Smuga uses projections of old videos and newspaper clippings of the famous criminal to add a sense of romanticism to this historical hero, while making sure to keep him current for a contemporary audience. Lighting and set designer Jacqueline Costa uses lights efficiently to make smooth transitions from the present day to the historical retelling of Leishman’s life. Her set, which resembles an old underground speakeasy, works in tandem with sound designer Beau Dixon’s 1960’s jazzy tones to make the play a criminally charming.

It’s in the acting and writing that Wings of Wax loses its height. Stodart and Hillier have a strong connection to each other shown by their witty and quick fire banter. Their moments of reliving Ken’s life playing both the characters that surrounded him and the legend himself are filled with a sense of play and fun. However, their more serious moments as Daniel and Tess feel forced and disengaged, particularly during the romantic elements.

The main issue lies in the dialogue and plot, which feels too crowded. Jokes are forced in with suffocating frequency, metaphors drilled into the audience’s head, and the foreshadowing is not exactly subtle causing what should be surprising revelations to feel more like “well about time that was said”. It’s unfortunate because Lindsay Price introduces many pressing topics such as addiction and gender roles, but overshadows them with cheap jokes and repetitive dialogue. When it is all over Wings of Wax doesn’t fall into the sea like Icarus – nor does it fly off into the glorious sunset like the Canadian bandit Ken Leishman.

I thought having wings meant that there would be flying. I was mistaken. Wings of Wax written by Lindsay Price is about a young man fantasizing about Ken Leishman- the infamous Canadian who was responsible for many robberies that took place from the 1950s through to the 1960s.

Directed by Monica Dufault, the play starts off with a waiter Daniel, (Joshua Stodart) and a waitress Tee (Emma Mackenzie Hillier) visibly bored with their slow paced job. What else is there to do in an empty restaurant than to daydream? And so it begins. Daniel takes Tee along with him on a serious head trip, stopping at various locations and times to relive the experiences of Leishman- the “flying bandit”. Speaking technically, this is done by switching back and forth between numerous characters and time periods – evident in the way they spoke, with Hillier sometimes playing the opposite gender, and the simple act of putting on and taking off a jacket and a hat.

Was this effective? It could have been, if there was a stronger connection between Stodart and Hillier. It was simply not compelling to watch.

Jacqueline Costa did an incredible job with the lighting and set design. With the use of shutters, and a table and chairs, the set was transformed from a restaurant, into a bedroom, into an aeroplane, and into a jail. It was easy to tell when the location had been changed, and fun to watch. Likewise, Beau Dixon’s work with the sound design and Kasia Smuga’s creation of the video design aided in the attempt to get these waxed wings to take off.

With improved chemistry between the two actors, it would have been a lot clearer that we had been watching a comedy – the audience probably would have laughed more. They also would have been able to anticipate the romance between Daniel and Tee as opposed to being caught off guard with that plot twist at the end.

Overall the show was definitely one to remember, as it didn’t do what I thought it was going to: make me laugh or give me that warm feeling that comes with romance. As a result, it may have been too cold here in St. Catherines for these wings to be able to function.