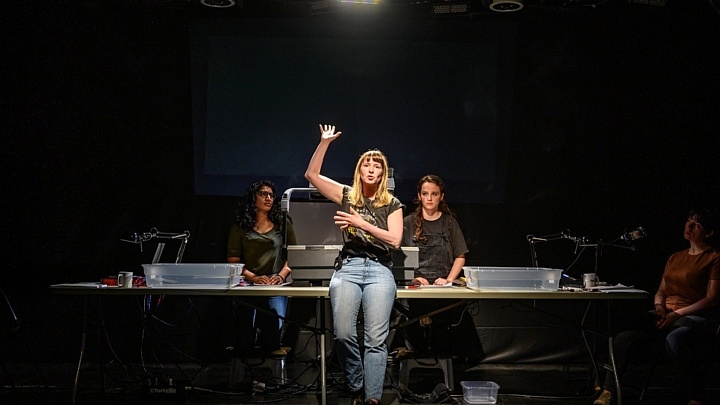 Young women grow up learning a slew of double-standardized, mixed-signaled lessons. If you don’t put out, you’re a prude. If you do put out, you’re a slut. If you don’t conform to the standard of the male-gaze, you’re a man-hater. If you conform too much to those standards, you’re an empty-headed ditz. From the time we are young, we are pressured to believe that our lives are not our own — that what we feel does not matter unless it fits someone else’s agenda. Guilty by Association’s show 1991 shows the dark, hidden side of growing up as a female-presenting individual. It reveals the ugly, visceral way that young women can be treated by society.

Written and directed by Cole Lewis, 1991 follows the story of a twelve-year-old girl who we are told is actually Lewis herself, and here is called Nicole. The story is presented through photographs, cut-outs, and shadows projected onto a large screen, with voices for characters provided by Lewis (who plays herself), and Jessica Carmichael, who, through a voice modulator and impressive vocal chops, plays every other voiced character. Nicole is sent from Southern Ontario to live with her father in Delaware for the summer after getting into trouble with the police. The reason she gets in trouble? After a man quietly threatens Nicole and her friend for being out after dark only days after a serial killer has selected a victim around their ages, Nicole retaliates by throwing a rock through the window of his car, shown through her silhouetted form grasping a rock in her hand and chucking it forward. Alas, even as she travels south of the border, “one neighbourhood danger is exchanged for another,” as the description on the In the Soil Arts Festival website reads. “And another. Jumping from crap car to seedy bar to crap car… Nicole hunts for a way out unscathed.” 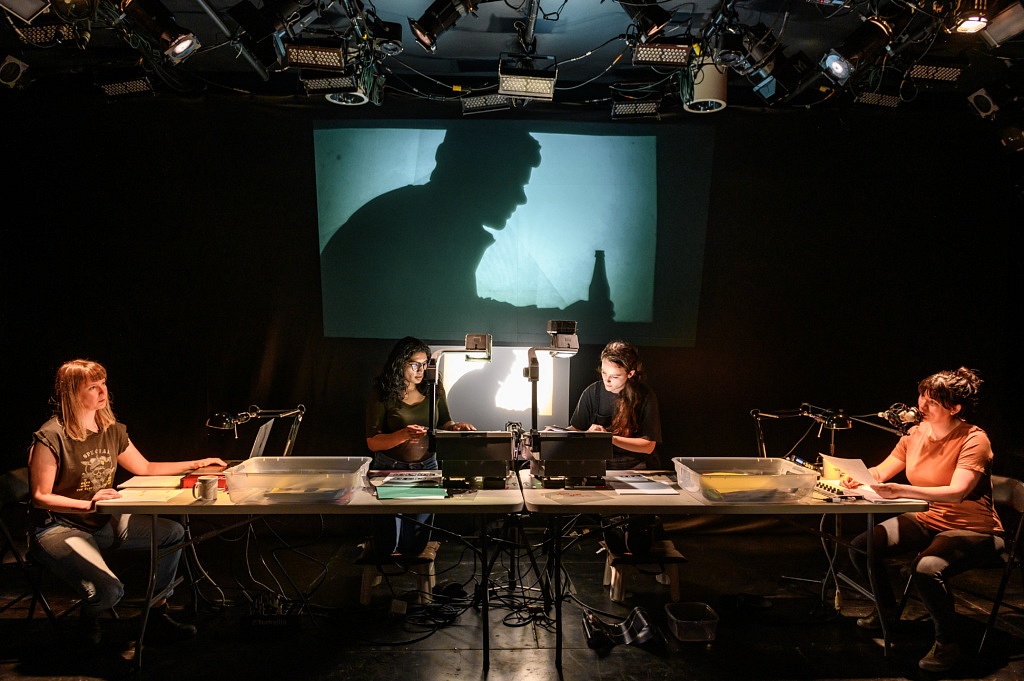 Along the way, she learns the unfortunate lesson that as a young woman, she is only allowed to have free will when it benefits someone else. Nicole’s dad, a beer-swilling Vietnam veteran with a bad case of forever acting like an impulsive child with adult privileges, cheerfully encourages anarchy in his daughter. “Fuck the consequences!” becomes a catch-phrase for the two of them. But once he becomes bored with playing the fun dad, Nicole’s father returns to what appears to be his day to day life: spending his entire waking hours in the bar. He tells his daughter to stop being a bitch when she reminds him that he was supposed to take her to the state fair. He calls the female bartender a man-hater for explaining to Nicole that she doesn’t need the attention of a man to be fulfilled in life. He encourages his daughter to dance with an older man, even if she doesn’t want to. From her father — this mythic figure in her life — she learns that her value comes from being agreeable and pleasant to others, and ends the moment her feelings don’t line up with what’s expected from her.

1991 is shocking, raw, and honest. It pulls no punches with its content and the portrayal of that content. Its visual approach allows you to paint in your own images for the details of scenes.The form of presentation furthers the show’s overall rough-edged tone. The projectionists (both young women, Mina James and Monserrat Videla) stand behind a long table, allowing the viewer to see them at work as they rifle through different photographs and silhouettes. 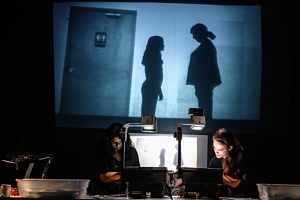 Mina James and Monserrat Videla at work creating the projections in 1991.

Meanwhile, Lewis and Carmichael sit at opposite ends of the table, speaking into microphones and using their voices to bring life to characters. At the same time, much of the emotion comes through their physicality and body language, adding to the strength and credibility of their performances. During one harrowing moment detailing the coercion and sexual assault of Nicole, Lewis gets up, shoves the images from the projector, and spits onto the screen. She rubs her fingers through the spittle, making it squeak faster and faster in the dead-silent theatre. To say that it gets the point across — not only of the physical action, but of the raw emotion — would be a serious understatement. By choosing not to explicitly show the literal image of Nicole’s assault, power is taken away from the narrative of the man who hurt her. His experience doesn’t matter. The focus is on Nicole — on her experience, and the harrowing effects on her psyche of the actions taken against her that night.

Guilty by Association has built a piece that hits home hard. It is a piece that lets itself sit in the discomforting reality of feminine youth, and rips open any doors that might be hiding the truth away. Lewis venomously dedicates the show to her primary school teacher, who told her that she should smile more after being picked on by someone in her class. A fitting dedication.

Tags: Cole Lewis•Guilty by Association•In the Soil Arts Festival
OlderLittle Eagle takes flight: Cole Forrest’s The Heels of our Grandfathers at In the Soil
NewerSexy and very ‘70s: Soulpepper’s Betrayal suggests that infidelity has no sell-by date