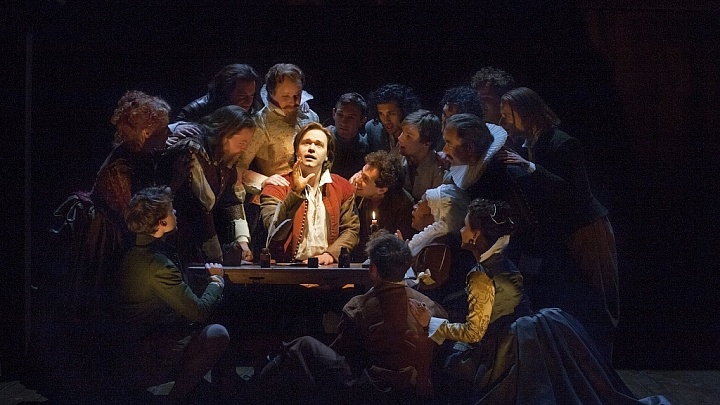 What do you get when you mix the tale of Romeo and Juliet with a touch of Twelfth Night’s Viola, and then the story of Shakespeare himself? A smorgasbord of laughs, tears, and exploding ovaries. Directed by Declan Donnellan, Stratford Festival’s North American premiere of Shakespeare in Love is a witty, and surprisingly touching, performance. 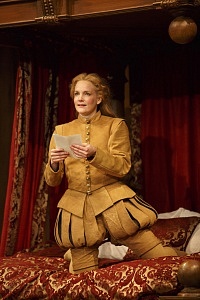 Many will have seen the 1998 movie of the same name (written by Marc Norman and Tom Stoppard) that Lee Hall has adapted into this stage play. As does the film, Shakespeare in Love tells the story of the Bard himself at the moment that he is commissioned to write a comedic play involving pirates and dogs. That play transforms from Romeo and Ethel, the Pirate’s Daughter, into what we all know today as Romeo and Juliet, as Shakespeare (Luke Humphrey) falls in love with a woman that he cannot hope to have forever. Viola de Lesseps (Shannon Taylor) is from the upper classes and would do anything to be a player in the theatre, except that women are not allowed onstage. She dresses up as a boy to audition and lands herself the lead role of Romeo. Eventually Will discovers the truth and just like the title characters of his famous tragedy, the pair fall in love but must keep their romance a secret, as she is engaged to be married.

The dialogue is full of clever references to Shakespeare’s famous romantic tragedy, as when Viola and Will spend their first night together and they have a conversation very similar to that play’s “Twas the nightingale and not the lark” scene. Going into this play with a solid knowledge of Romeo and Juliet would be helpful in understanding the references, but it’s by no means necessary. 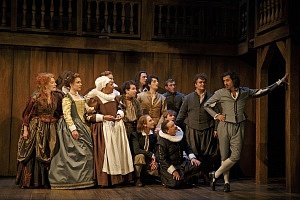 Saamer Usmani (right) and Members of the company. Photography by David Hou.

The ensemble is one of the most enjoyable parts of this show, and through all their scenes and transitions, the heightened energy is evident. Although the dialogue is sometimes difficult to catch, with actors muffling their lines and using sometimes inconsistent accents, each performer is deeply committed to their character’s arc. Saamer Usmani in particular had me swooning over his portrayal of Christopher Marlowe, performed with confidence and swagger (cue the exploding ovaries mentioned earlier!). Taylor and Humphrey are also standouts as the lovers. Not only are they remarkable with the text and comedy within the show, the chemistry between them is earth-shattering.

There are certainly some marginal directorial choices, such as the unclear status of onstage spectatorship. When, within the production’s frame, the theatre company stages a play, some characters serve as its audience; it’s hard to understand why those same characters then also serve as the audience for scenes that are supposed to be taking place in secrecy, including very intimate ones. This dulls the effect of those scenes and makes it difficult to decipher what is actually meant to be understood as a performance. Music is another questionable: while at times it meshes well with the onstage action, there were moments that it feels out of place and forced. There is one moment that a note is held so long, it felt like searching for laughs — unnecessary in a play that calls itself a comedy. 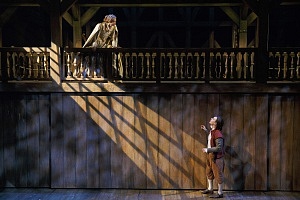 Kudos must be given to the designer, Nick Ormerod, for painting a stunning picture onstage. The set is made out of wood, and has two bridges on top of one another spanning the length of the stage. There is a gap in the middle of the structure used as the stage for Romeo and Juliet and multiple entrances and exits, and little nooks where the ensemble stands to watch the action. The set moves forward and back to create the illusion of onstage and backstage, which is extremely clever and helps provide clarity for the audience.

Shakespeare in Love is without a doubt an entertaining afternoon at the theatre. As Will asks us in the beginning of this show, “Shall I compare thee to a summer’s day?” My answer would be a resounding yes for this production — with only a few clouds here and there.