Confrontational Comedy: “The Adventures of the Black Girl” Leaves No “ism” Unscrutinized 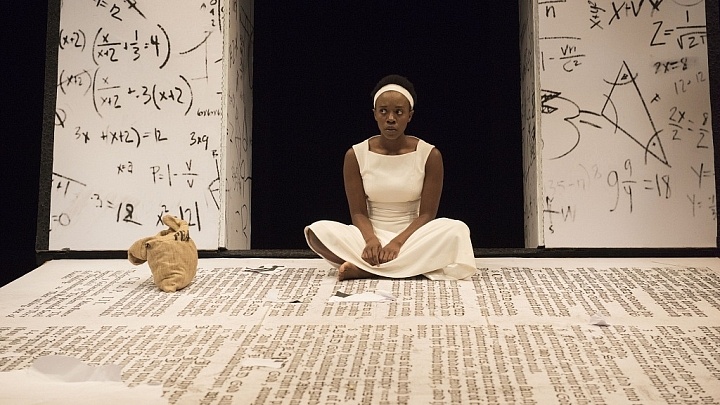 Imagine if you will, racism, colonialism, sexism, imperialism…and any other “ism” you could possibly imagine being tackled in just one short hour. I give you the world premiere of The Adventures of the Black Girl in Her Search for God, which presents controversial subject matter with brutal honesty and more than a little comedy, but still manages to have tact. Don’t let the lengthy title scare you away—this lunchtime one-act, presented at the Shaw Festival and directed by Ravi Jain, is anything but long-winded.

This play was originally a short story by George Bernard Shaw, and has been adapted for the stage by Lisa Codrington. The show begins with Shaw himself (Guy Bannerman) handing out birthday hats to members of the audience. He acts as a sort of narrator, lamenting the lack of prologue and attempting to read his own, before Natasha Mumba emerges, insisting that they need to get a move on (Shaw’s prologues are known for revealing his own political views, and they’re typically quite long). I must say that it was quite the experience to watch the author being kicked off the stage and chastised at the very festival named after him. Just as the Bible is critically examined later on in the show, we see here the production offering a critique of Shaw, because as controversial and progressive as his views may have been, he’s still an old white guy.

A verse of “Happy Birthday” starts the story: we find that the Black Girl (Mumba) is being abandoned by the missionary (Tara Rosling) she has been living with, because she asks too many questions about the Bible. She decides to seek out God to find answers to her questions, after the missionary confesses that she’s had to make up answers to satisfy the young girl. On her journey, the Black Girl encounters many interesting characters, such as a Black Mamba snake (Kiera Sangster), an East Asian Jesus (Jonathan Tan), and a group of British scholars. They all have their own interpretations of God and religion, which seems quite relevant to today, where we’re constantly bombarded with people who think they’re God personified (Kanye West, I’m looking at you). 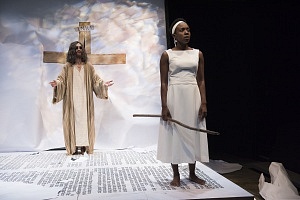 Mumba is spectacular in her role, and is riveting to watch. She plays her role with such honesty, and a fervent passion for the quest her character undertakes. The rest of the ensemble—Ben Sanders, Andre Sills, and Graeme Somerville—compliment her perfectly, and even though most actors are double or even triple cast, they all bring a strong sense of individuality to each character they play. Bannerman is particularly comical as Shaw, popping back in near the end to try and finish reading the prologue, before he is stopped once again by Mumba, who delivers a spectacular monologue about everything the play had to cover in very little time.

The set, by Camellia Koo, was phenomenal; the action all takes place on a giant Bible, with pages constantly being examined, flipped, and torn. Through most of the play, a page with the verse “Seek and ye Shall Find” written in gold glitter was displayed, pointing to the Black Girl’s quest to find God. 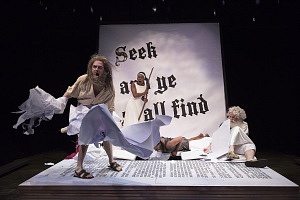 The premise of this young girl not blindly believing everything she was told about Christianity and the Bible was a breath of fresh air. This could easily be modified to fit any religion, but it boils down to being able to make your own decisions about what is true, and what is just, and about your own personal belief system, as she does in the end. The scenes discussing racism and prejudice were particularly striking. The play pokes fun at people who speak about racism as though it ceased as soon as slavery did, but it also presents some harsh truths: that racism is so deeply-rooted in culture, it’s hard to see it in ourselves until we’re called out on it.

Although it is certainly a comedy, The Adventures of the Black Girl… sugarcoats nothing. We have a long way to go with our list of “isms” and people will often use religion to back many of them. Perhaps it’s time for all of us, just like the Black Girl, to toss aside all preconceived beliefs, and start fresh. How to begin? Get yourself a ticket to this show, and be prepared to question absolutely everything; maybe this will even lead you on your own adventure…just watch out for Mamba snakes!

Our Shaw embedders stepped into The Horse and His Boy‘s rehearsal hall for the first time. Shannon Fletcher, Alexandra Chubaty-Boychuk, Matt Lazaris-Brunner,...