Not Alone: Lepage’s “887” Talks of Revolution, Race, and Remembering 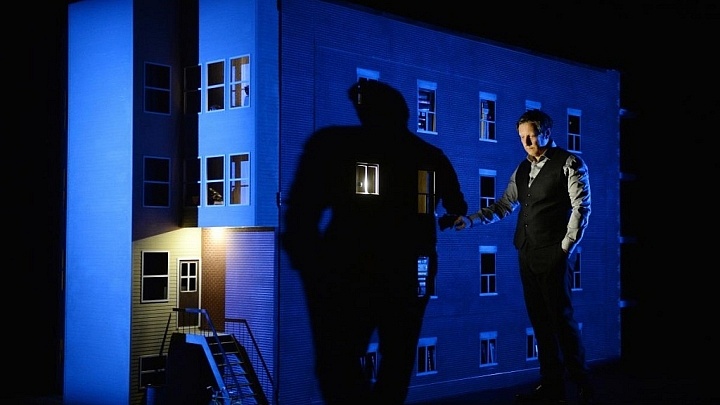 When I first heard that Robert Lepage had written, directed, and would perform a one-person show for the PANAMANIA Festival about his life growing up in Québec, the first word that came to my mind was – dare I say it? – indulgent. “An entire show about Lepage, by Lepage?” I thought to myself. “Should I buy a biography to prepare?”

As the lights dim in the Bluma Appel Theatre and officially mark the opening of 887, my cynical attitude reaches its peak. Lepage strolls onstage, introduces this newest creation of his theatre company EX MACHINA, and reminds us to turn off our cell phones. Then something happens, causing me to lose my grumpy demeanour and sit up in my seat: Lepage’s curtain speech transforms into the kind of Québécois history lesson you won’t find in any school curriculum, and that you won’t find outside of Québec – until now.

“887 Murray Ave.”: a miniature, almost doll-sized, model of Lepage’s home in Québec City. As the house rotates onstage, Lepage introduces each family in the five-story apartment complex. It’s as though the audience are giants watching from a hillside as tiny projections dance in the windows of each families’ homes and Lepage narrates the families’ heritages. This is more than an apartment in 1970 – it’s microcosmic of Québec itself: 80% Francophone, 20% Anglophone, and home to immigrants from around the world.

The dollhouse of Lepage’s childhood opens to reveal a stark white modern kitchen: Lepage’s current residence, apparently. In the present day, Lepage faces the same challenge as any actor: trying to remember. In preparation for an upcoming gala in Montreal, he is asked to know “by heart” a poem titled Speak White written by Michele Lalonde in 1968, in the midst of the Quiet Revolution.

Using doll-like figurines and live video, Lepage recreates images from his childhood. The French President gives a speech from the breast pocket of Lepage’s coat, and Lepage’s own face looms over a lonely boy who waits on his parents’ balcony for his father to return from a long shift as a taxi driver. Through images designed by Felix Fradet-Faguy – and through Lepage’s eyes – we experience Québec City in 1970.

Let’s take a minute to position ourselves. As a young Anglophone Canadian, my education on the Quiet Revolution consisted of the following: in the 1970s a terrorist group known as the FLQ kidnaps the Quebec Minster of Labour and visiting British Trade Commissioner; Prime Minister Trudeau issues the War Measures Act; the Quebec Minister of Labour is murdered by the FLQ; the culprits are rounded up, and order is restored – the end. As Lepage demonstrates through his attempts to learn Speak White “by heart”, however, this was not the end. What still remains is a history of oppression – embodied and given shape in cultural symbols such as Canada’s flag – which needs to be acknowledged and taught.

For me, the draw of this show is not Lepage’s mastery over theatrical aesthetics, but rather the perspective that it lends and its strategic placement in time and location, both on the stage and in the theatre. In 2015, in Toronto – the largest Anglophone city in Canada – while it hosts the Pan AM games, we are brought back in time through the memories of a young Québécois artist during the Quiet Revolution. When Lepage echoes the words of Michele Lalonde – “we are not alone” – it is not by chance that the Lieutenant Governor is sitting in the highest box of the Bluma Appel Theatre, flanked by CSIS agents.

887 is more than a show about Lepage’s childhood, and it’s certainly more than an indulgent jaunt across Canadian cultural borders; it’s a show about marginalization, memory, Québec, and Canada. It’s not simply a biography: it’s a show about a revolution, and, like the movement it evokes, perhaps it’s not so very quiet after all.