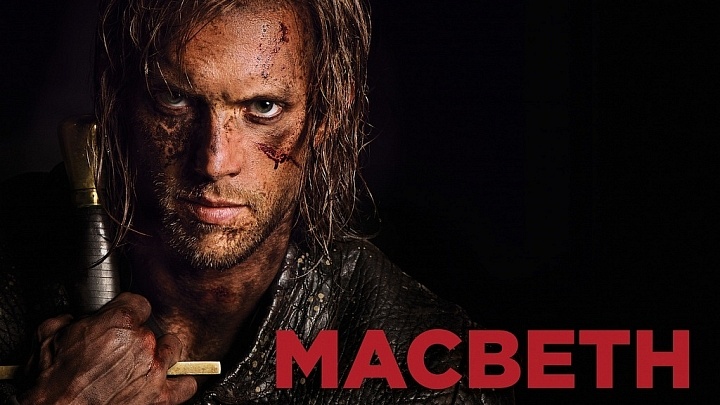 Something wicked (and wonderful) this way comes. The Stratford Festival opened its 2016 season with Macbeth last night at the Festival Theatre with a performance that satisfies cravings for the supernatural, sensual, and sanguinary from Shakespeare’s notoriously dark “Scottish Play”. 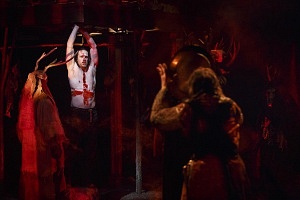 Macbeth (Ian Lake) and members of the company. Photography by David Hou.

For a production set in the play’s original 11th century time period and with a distinctly elemental design (courtesy of designer Julie Fox) featuring torches of real fire, this production is electric. Director Antoni Cimolino sets an unpredictable pace, thrillingly jarring viewers with rapid transitions from moments of silent darkness to raucous celebrations, forcing their attention. Aided by lighting designer Michael Walton’s shadowy gloom — in this rare instance welcome on stage — and the eerie shrieks and screeches of Thomas Ryder Payne’s sound design, this Macbeth is able to capture a cinematic brand of suspense on stage; it is almost impossible to tear one’s eyes away from the bone-chilling tale of a couple’s treacherous lust for power, propelled by their lust for each other and provoked by mystical interference.

In the aftermath of a bloody triumph over Norway, Scottish war hero Macbeth is intercepted by three unearthly beings (played with appropriately grotesque physicality by Brigit Wilson, Deidre Gillard-Rowlings, and Lanise Antoine Shelley) who prophesy that he is to be Thane of Cawdor and the King, but that his children will not. When the first prediction soon materializes, Macbeth — spurred on by his power-hungry wife (played with passionate force by the unusually youthful Krystin Pellerin, who negotiates the public and private personas of Lady M with ease) — becomes intent on achieving the crown he feels entitled to by fate. Eventually consumed by their ambition, the pair is driven mad with their guilt for the cruel acts committed in its pursuit. 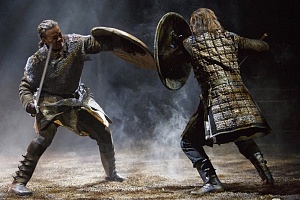 Michael Blake as Macduff (left) and Ian Lake as Macbeth in Macbeth. Photography by David Hou.

An interpretation of the title character that is appealingly stripped of Shakespearean pretension — and often of his shirt — Ian Lake captures the rashness and fast-paced reasoning of a conflicted young man unexpectedly confronted by desire. He and Pellerin have some of the most potent onstage chemistry I have observed in recent seasons on the Stratford stage, making Macbeth and Lady Macbeth a compelling couple, if not an endearing one. Other notable performances include Scott Wentworth’s charming portrayal of Banquo as a kindly father and Sarah Afful’s achingly genuine Lady Macduff, making their eventual tragedies all the more heart-wrenching.

If the show has a fault it does not lay with the performers. Poorly timed transitions throughout the play feature spotlights on various minor characters silently gazing out towards us watchers, presumably highlighting some inner monologue of the masses but which, without more clarity, comes across unfinished thought. More attention could also have been given to the play’s fight sequences. I, for one, felt short-changed by the infamous duel between Macbeth and the honourable Macduff (Michael Blake) which usually climaxes in Macbeth’s onstage death but here ended with the pair running out of sight following a few lacklustre swings of their swords.

As with versions since Shakespeare’s time, audiences of this Macbeth are left with the ambiguity of evil’s origin. Is it the man or the messengers that are to blame for the tragedy that has occurred? And if it’s the man, how easy is it to corrupt the human heart? 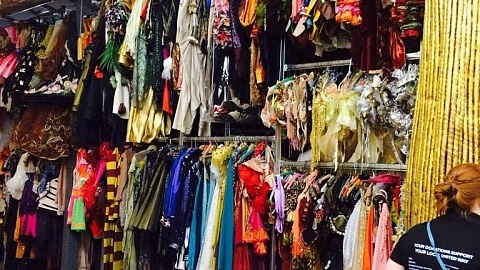 Theatre history comes to life: Take a trip to the Stratford archives with DARTcritics

The Stratford archives warehouse “What’s in the Stratford Festival archives? Do we even really know what archives are? Are we going to be looking at dusty... 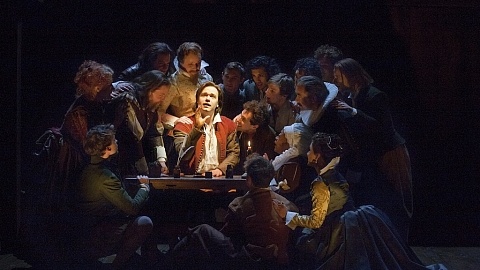 What do you get when you mix the tale of Romeo and Juliet with a touch of Twelfth Night’s Viola, and then the story of Shakespeare himself? A smorgasbord of... 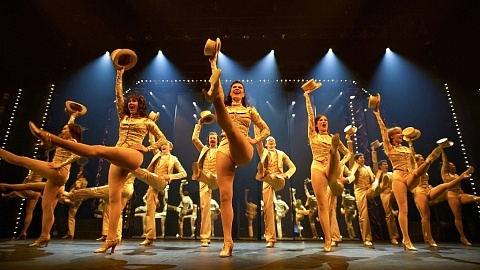 Dayna Tietzen as Cassie. Photography by David Hou. A five, six, seven, eight! As a musical theatre buff, I brought high expectations to this show, and it...