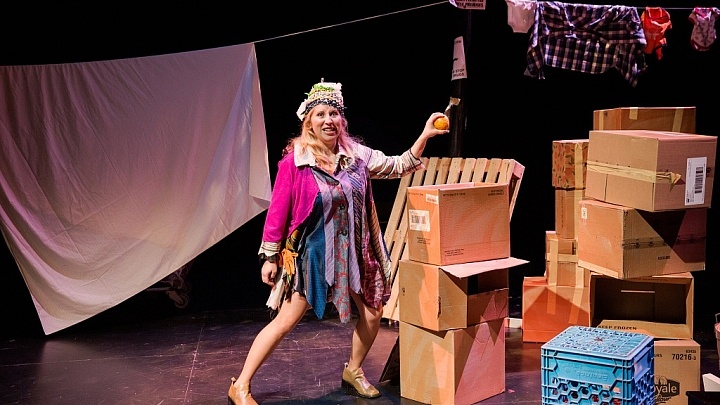 Poor would be one way to describe Essential Collective Theatre (ECT)’s newest production of the same name, playing at the First Ontario Performing Arts Center. The latest iteration of Suzanne Ristic’s one-woman show starring ECT’s artistic director (and Brock’s own) Monica Dufault and directed by Karen Wood failed to live up to the standards set by the company’s previous productions.

Poor follows a middle-aged upper class woman by the name of Shelly through a bizarre mid-life crisis coupled with immense wealth and good intentions. Tired of her life of luxury as a neglected trophy wife, Shelly yearns for a taste of poverty. One raggedy outfit and a ride from her loyal chauffeur later, and Shelly finds herself immersed in the culture of Vancouver’s Downtown Eastside, getting in alley fights over rotting fruit, having wild impromptu sex with strangers (in the same alley), and even developing a bacon fetish. Soon enough her impoverished fantasy world collides with her life of luxury and both come crashing down.

The downfall of the play can be found in the both the character of Shelly as well as the plot itself. What begins as a noble quest for enlightenment slowly morphs into a self-indulgent affair. When Shelly first travels to the Eastside it is to find adventure and independence by escaping her mundane life, but intentions quickly shift from consciousness-raising to chasing sexual thrills while giving an expensive handout here and there in an attempt to justify abandoning her initial intentions.

There are several redeeming qualities to Poor: the elaborate, derelict-looking set by Peter Dillman, as well as Dufault’s performance. The set is comprised of many stacked cardboard boxes containing various props Dufault uses throughout the performance to help her portray the vast number of characters she embodies. While Shelly is morally unstable and borderline irritating, Dufault’s performance is quite formidable.  The acting, coupled with the creative use of the multitude of props, was enough to leave this reviewer reflecting that “I guess it wasn’t all bad.” But this was not enough to redeem it fully and so overall ECT’s Poor, in particular its incongruous final plot twist, was poorly received.

Poor, a play whose title sounds like a university student’s autobiography, seduces its audience into realizing just how privileged they are, while still having time to laugh along the way. 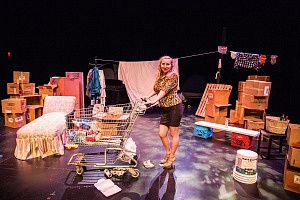 Monica Dufault captivates the entirety of Robertson Hall at the First Ontario Performing Arts Centre as Shelly Cormorant, a member of the wealthy 1% who has the ridiculous desire to experience what it is like to be poor — and takes us on that journey with her. This play has you going from hating her to loving her to realizing you are Shelly in 75 minutes. Dufault owns the stage from playing the variety of characters Shelly interacts with to dancing throughout her scene transitions, keeping with Shelly’s spunky character.

Set designer Peter Dillman does an excellent job of creating the variety of locations Shelly embarks on through common items like boxes and shopping carts. The stage can transform from the streets of Vancouver to a dinner party by simply placing a tablecloth onto a shopping cart. Every transition is filled with sound (Ethan Rising) that perfectly adds to the adventure of the story while creating atmosphere – be prepared for nauseating sounds of vomiting diarrhea (which can be an effect of heroin use) in the clinic that Shelly visits. Director Karen Wood weaves all of these wild elements together excellently to create an all-around entertaining piece of theatre.

Poor is written by Suzanne Ristic, who clearly knows how to use satire to balance comedy with an important message. Ristic’s satirical writing tricks the audience into laughing at the real-life horror that is the homeless problem. But instead of spouting ideas for change, Poor turns the mirror onto the audience to invite them to reflect how they may be like Shelly in some ways. Shelly uses her story as a form of entertainment, and in a way this play does too. But when reality sets back in in Shelly’s life, the audience too can take a step back and wonder why they are laughing in the first place.

Poor is the best of both worlds in theatre – a comedy that will make you laugh until your stomach hurts with an important message weaved in. As students we are often overwhelmed with the weight of finances and do not often take the time to think how lucky we are to have a roof over our heads and food to eat. Poor reminds us of this without making us feel guilty for laughing, but hopes to have an impact on our future choices.

How many characters can one actress play in the span of 75 minutes? For Monica Dufault, the star of Poor, written by Suzanne Ristic and directed by Karen Wood, the amount seems to be endless. When you go to watch Poor, prepare to witness a marathon performance that can only be described as “herculean” (as stated by Wood in the program) — though the script isn’t nearly as strong.

We are taken on a journey through the eyes of the eloquent, upper-class woman, Shelly Cormorant (Monica Dufault) who, despite being rich, feels a relentless void in her life. Her ignorance may cue the audience to expect that she will go through a transformation, but the plot does not develop in such a way. Shelly reenacts the story of her revelation: she needs to be “poor.” We follow her through her exploration of Vancouver’s most impoverished area (the Downtown Eastside) as she discovers what it is like to live in poverty. Shelly naively steps into the world of the less fortunate, exclaiming how free and happy she feels.

The script attempts to give Shelly realizations that being “poor” is not at all what she has imagined it to be, but they never come off as sincere. Even as she explores an impoverished clinic, she is in awe of the awful, unclean environment, as if at the zoo amazed by the animals. It is apparent that the script is meant to be sarcastic and openly satirical, poking fun at how ignorant wealthier people can be, but there was not a big enough change in Shelly’s point of view for the message to sink in.

Despite a bit of a disappointing script, the brilliant use of the set and props, designed by Peter Dillman, and multiple changes into quirky costumes (Roberta Doylend), helps the production shine. Dufault seems to dance onstage — setting up one scene here, grabbing this prop out of that box, changing this outfit for that character; she has the choreography down to a science. It is such a pleasure to watch Dufault hold the audience in the palm of her hand in every scene she performes. Between getting beat up, having sex with her “poor” boyfriend, and having conversations with four or more people at once, she makes it look completely effortless, and most astonishingly, believable. Dufault’s outright commitment to the character makes Shelly quite likeable despite her pure naivety towards less fortunate people. This, however, seems problematic for the play. This behaviour should be frowned upon, not excused by an innocent, naïve demeanour. This may be the purpose — to show the ridiculousness of wealth and upper class — but the message is missed.

Writing a play about poverty definitely isn’t easy, and Poor does manage to have its moments. The satirical humour does not do it justice though, as satire is generally supposed to do. The entire play is based off of this exaggerated character walking into the world of poverty, guiding us all on a journey of supposed realization. But there are no signs of alienation or attempts to provoke the audience to think about their own actions in society.

If you are thinking of seeing Poor, see it for the extraordinary directing and performing, and a chuckle or two, but the story may disappoint.

To get a behind-the-scenes look at ‘Poor’, follow this link to the DARTcritics’ coverage of their embedding process:

It is hard to say whether Poor is commendable in its defiance of our expectations or just in poor taste.

Written by Suzanne Ristic, Poor is the story of a rich, put-upon woman named Shelly (Monica Dufault) who has a sheltered existence in the home of her wealthy CEO husband. One day she grows tired of the easy way and is inspired to pose as a homeless woman in order to live a life of hardship. During her first day as a poor woman, Shelly gets into fights with a bag lady, visits the hospital, and has sexual relations with a random homeless man named Joe before returning home. Despite such strange experiences, Shelly soon becomes excited to walk amongst the poor once more. Along the way she goes through various misadventures that leave her questioning the social inequality that has left so many people under the heels of the wealthy.

While Poor is a modest production by a small theatre company, such a setup seems to compliment the play’s strong position against social and economic inequality. It is a one-woman show, leaving Dufault the task of portraying all of the characters recounted in Shelly’s story (the direction is by Karen Wood). The set is comprised of various bits of trash, creating the look of a run-down alley. There is a seeming parallel between the disparity of this sparse set design and lavish and expensive commercial theatre productions, and the economic divide between the rich and poor in our time.

It should also be mentioned that Poor has a shockingly raunchy sense of humor. Shelly recounts her sexual exploits with her homeless lover, Joe, while making suggestive poses and promiscuous remarks and wearing lingerie. The fact that Poor has no shame in depicting such extreme and sometimes grotesque subject matter is certainly impressive for its sheer audacity.

There are also a few instances in the play that imply and even downright display acts of emotional and physical abuse. The biggest culprit in doling out such abuse is Shelly’s husband, who repeatedly puts her down and even goes as far as to physically assault her towards the end of the play. This disturbing and controversial subject matter clashes with the frequently silly tone of the rest of the production. The fact that such serious subject matter is present in a play that relies so heavily on zany comedy is disrespectful to a serious issue like domestic abuse.

While Poor is notable for its harsh critique against our society’s growing wealth gap, said critique is more often than not obfuscated by the play’s unbound raunchiness, rather than enhanced by it.

To close out the coverage of Essential Collective Theatre‘s The Team by our critics, the non-embedding students attended the premiere and closing of the show... 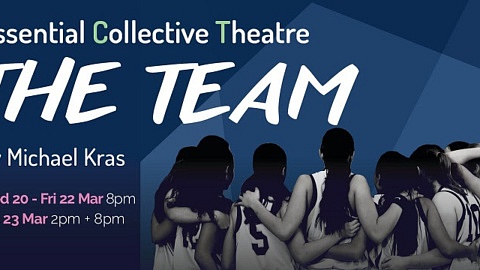 The other half of our embedders give their final thoughts on The Team to close out DART Critics’ time embedding with Essential Collective Theatre. Dani Shae...