Pre-recorded digital theatre can reduce performers to ghosts. The moment of ephemerality has passed; a recording hopes to capture its spirit for the viewer. I am going to examine this effect in two productions of the musical Ghost Quartet, specifically the 2015 production filmed at the McKittrick Hotel in New York, starring Brittain Ashford, Gelsey Bell, Brent Arnold, and writer/composer Dave Malloy, and the more recent production at Crow’s Theatre in Toronto, recorded during the COVID-19 pandemic and starring Beau Dixon, Hailey Gillis, Kira Guloien, and Andrew Penner. The Crow’s Theatre digital production was based on a live staging by the same company a year prior, which I was fortunate enough to have attended.

There is no single correct way to produce online theatre; different productions set out with different goals. It is nonetheless important to create a vocabulary for these possibilities and to analyze the effect they have on audiences. It is unlikely that online theatre will go away any time soon. It existed before the pandemic, though it was not a necessity then, and it will exist afterwards, influenced by the experimentation of productions staged when it was the only option. 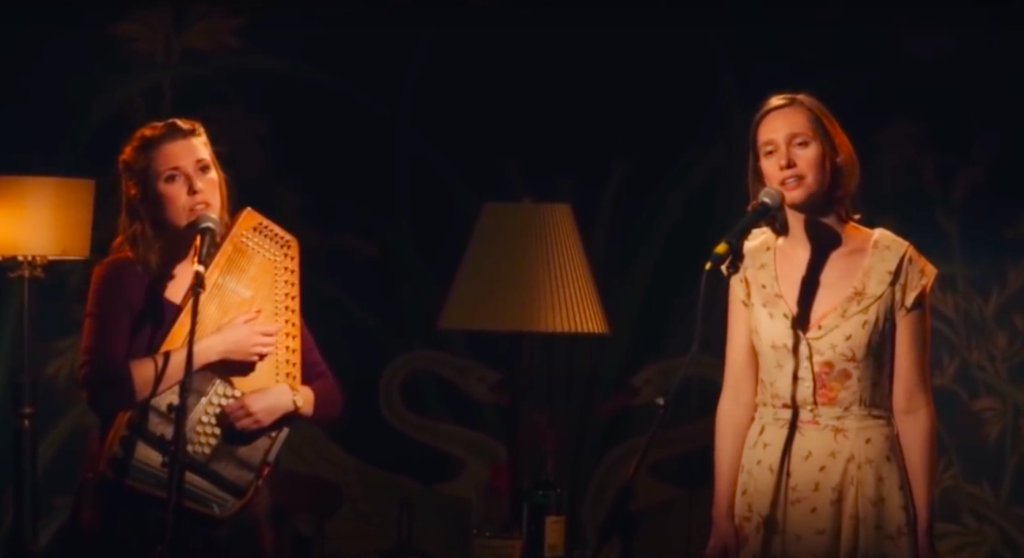 Brittain Ashford (left) and Gelsey Bell in the McKittrick production of Ghost Quartet, directed by Annie Tippe. The image is a screen grab from the YouTube video.

Ghost Quartet is so named because it is based on the central contemplation of the possibility of multiple lives after death, and because it is performed by a group of four. It follows a series of interwoven stories about the many lives of main characters Rose and Pearl. The recording of the McKittrick production was released to YouTube in March 2020 and can be streamed for free at any time. The Crow’s Theatre production was a ticketed event which could be streamed at set times during October 2020 as a source of income for the theatre company during the pandemic. The McKittrick version on YouTube is a free recording of a previously ticketed event and has lower production value in terms of editing and camera angles, which is possibly why Malloy chose to upload it publicly for free. 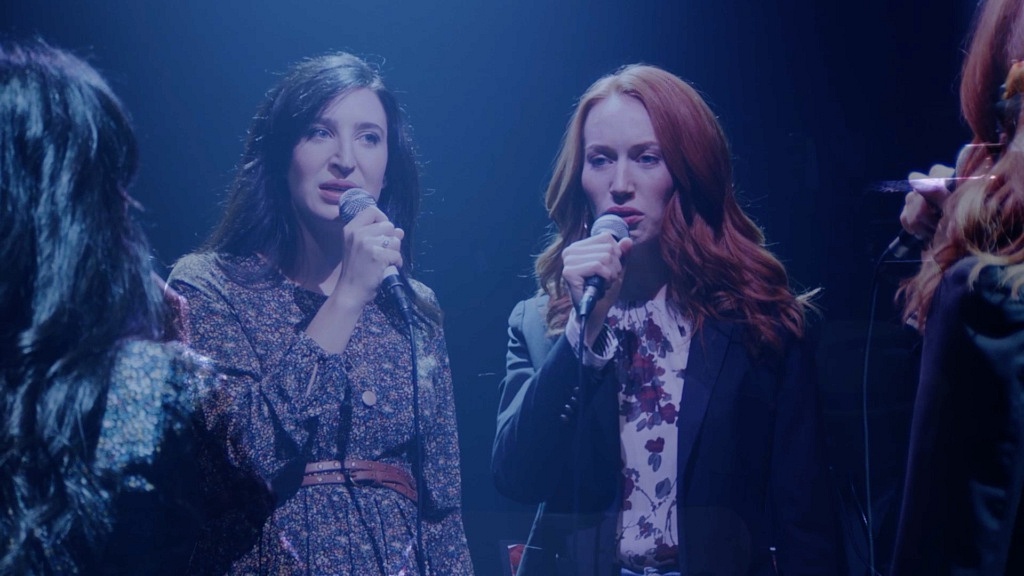 Hailey Gillis and Kira Guloin in the digital version of the Crow’s Theatre production, directed by Marie Farsi with lighting by Patrick Lavender. The image is a screen grab provided by Crow’s Theatre.

In contrasting ways both productions create a haunting, liminal space for storytelling. The McKittrick performance, directed by Annie Tippe, is a recording of a live event in front of a live audience. It includes clapping between songs, laughing at jokes, and even coughing from an audience member during the song “Soldier and Rose.” These sounds endeared me to the audience, despite the fact that their experience was taking place five years before mine. It struck me as a reminder of the lyric from one of the songs in the show, “Starchild,” in which the character describes feelings of human isolation and recognition: “a billion light years away someone is thinking the same thing, but he’s already turned to dust.” These sentiments were newly relevant watching the recording alone and hearing people sharing a space with one another years before. Not only are the performers ghosts of themselves five years ago, the audience is ghostly and haunting me in the digital medium.

Marie Farsi’s digital production for Crow’s Theatre was recorded with no audience and yet it is illuminated, full of life and soul. The visual landscape is constantly reinventing itself as the characters travel through different lifetimes, aided by Patrick Lavender’s stunning lighting design. The lighting is a faithful translation of the design from the live production a year prior, now remade to be captured on video. Lavender uses unconventional elements in his design, including pieces of a broken mirror spinning on a record player, refracting light in a way evocative of a mirror ball. The dim yet rich lighting evokes sharing stories around a campfire, with amber, blue, and purple tones. 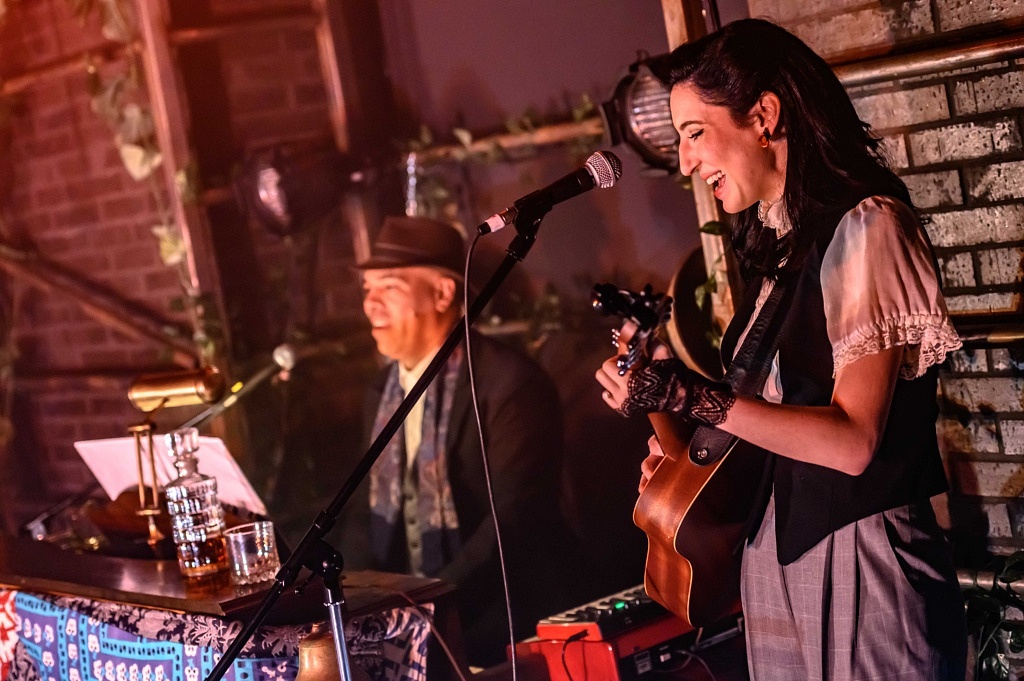 The videography of the production at the McKittrick transforms the hotel into a shadowy space full of music, life, and ghost stories. With limited cameras we aren’t fully invited to enter the world of the production and are only given two angles to watch from. The lighting is understated and naturalistic, evoking a dimly lit parlor, and eventually going completely dark for the song “Lights Out.”

The videography in Crow’s Theatre’s production includes multiple camera angles, some stationery and others mobile. The staging of the live production, also directed by Farsi, had audience members on two sides of an intimate playing space. The digital version evokes the same closeness as the cameras navigate between the performers. The use of video editing allows the viewer to see two angles at once by superimposing them on top of each other. When Gillis and Guloein would have been performing to a separate halves of the audience in the live production, both are seen simultaneously with this effect. These moments highlighted how filmed productions control the audience’s gaze, as opposed to how live theatre frees the audiences eyes to wander anywhere in the space. 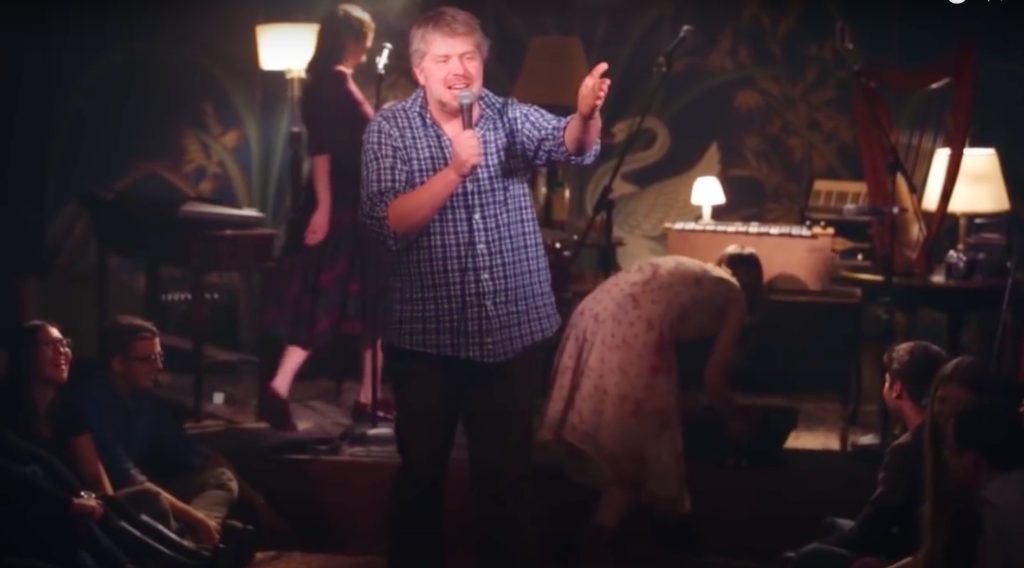 Dave Malloy in the McKittrick production. The image is a screen grab from the YouTube video.

The visual and theatrical world of the production at the McKittrick is fairly static. The most striking moment of staging is during the song “Fathers and Sons,” which moves Arnold and Malloy out of the corners where their instruments are sitting, and into the centre of the room where they drum and sing. By contrast, the Crow’s Theatre’s production expands on the visual and theatrical world the text offers. Farsi’s staging is striking and visually stunning in every moment, while staying true to the rustic style of the musical. This digital production grips the audience’s attention without needing to be live.

The different directors had different audiences they wished to include in the storytelling. Tippe is more concerned with the live audience than the cameras, while Farsi’s lack of in-person audience pushes her to keep the digital audience in mind with her staging. Case in point: in the McKittrick production during the “Lights Out” number performed in darkness, the live audience’s eyes would have been able to adjust, but the virtual audience may as well be listening to the soundtrack.

There are three moments of direct audience interaction in the McKittrick production — two where the performers distribute instruments to audience members and one where they distribute shots of whiskey. Pre-recorded productions lose such possibilities to interact with the audience. Watching the performers distribute drinks made me yearn for the intimacy of live theatre. I would be interested to see how a live online production of the McKittrick staging would incorporate this aspect. Having seen Ghost Quartet live at Crow’s Theatre in 2019, the intimacy of sharing a drink with the cast made a lasting impression on me (drinks were available for purchase at the top of the show). While this cannot of course be a feature of the digital version of the Crow’s production, the intimacy of Farsi’s direction has not been lost. It is found in the energy between the actors. They play the scenes to each other, occasionally checking in with the camera or performing solos out to the room. This draws attention to the eeriness of performing to an empty theatre. In the production at the McKittrick the actors play out to the audience. The performers rarely look directly at each other, instead broadcasting the narrative to the audience and inviting them into the world of the musical.

The New York cast inhabits their roles very naturally — roles written with these performers in mind. This is not to say the performances between the two productions are vastly different; to the role of Rose, both Ashford and Gillis bring youthful, energetic charm. Both Bell and Guloien are jaded, soulful, and haunting as Pearl. The essence of the characterization is familiar between these two productions. The Crow’s Theatre cast brings more performative flair and self-awareness to the roles, both live and digitally. 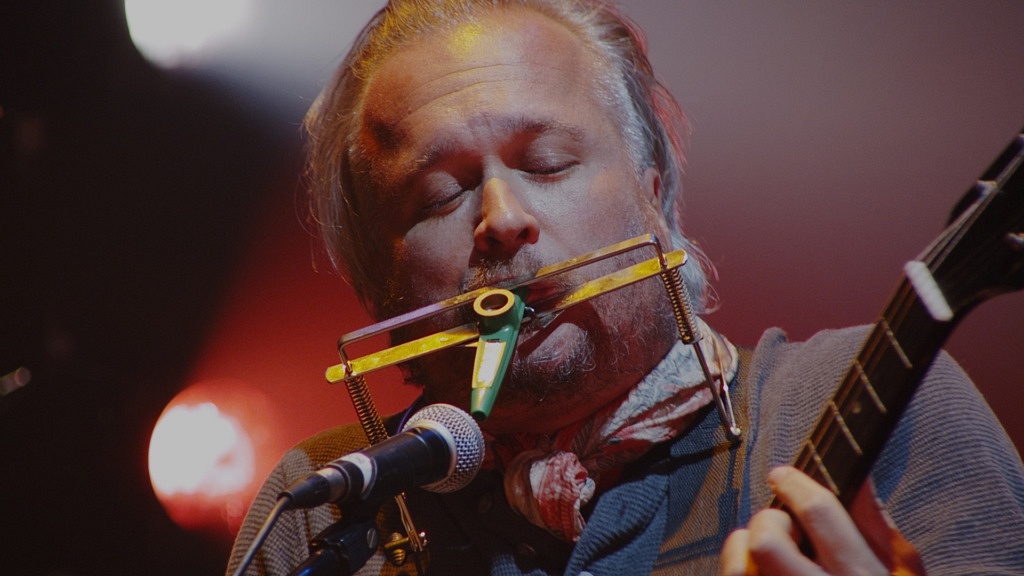 Andrew Penner in the digital Crow’s production. The image is a screen grab provided by Crow’s Theatre.

The differences and similarities between these recordings can inform viewers about stylistic and practical considerations when viewing and producing virtual theatre. The two performances blur lines between film, theatre, and concert, simply becoming storytelling without the necessity to be categorized. Digital theatre may be far from what we are used to but even the ghosts of performances past can evoke humanity and intimacy, when produced as thoughtfully as these productions were.