Scenes from an Execution has opened, and even as someone working on it I was floored by how well the ambitious design turned out and how far the actors have come since the first rehearsal. As the dramaturg I have been watching the production night after night from the comfort of my living room. Though some performers are working in their homes, many are at the Marilyn I. Walker School, delivering the show from classrooms and studios. To get a clearer image of what it’s like behind the scenes during the show itself I talked with cast members Celine Zamidar, who plays Sketchbook (pictured above in a photo by Sammie Marett), and Jesse Caines, who plays Urgentino; and assistant technical director Sid Malcolm. 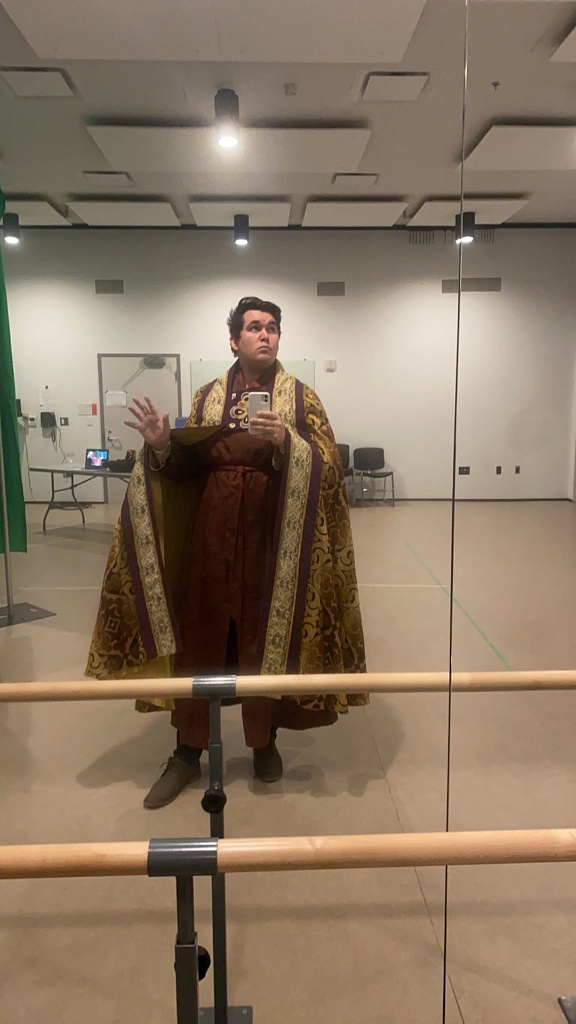 Jesse Caines in the DART studio where he performed Scenes from an Execution. Photo by Jesse Caines.

Jesse speaks to the acting process in an online production: “The idea of getting into the role is where the challenge comes. You’re not waiting in the wings or dressing room getting ready for your next scene.” Celine elaborates on the experience: “It’s just hard to use your body and give that energy to a computer. That’s the weirdest part in this theatrical form.” 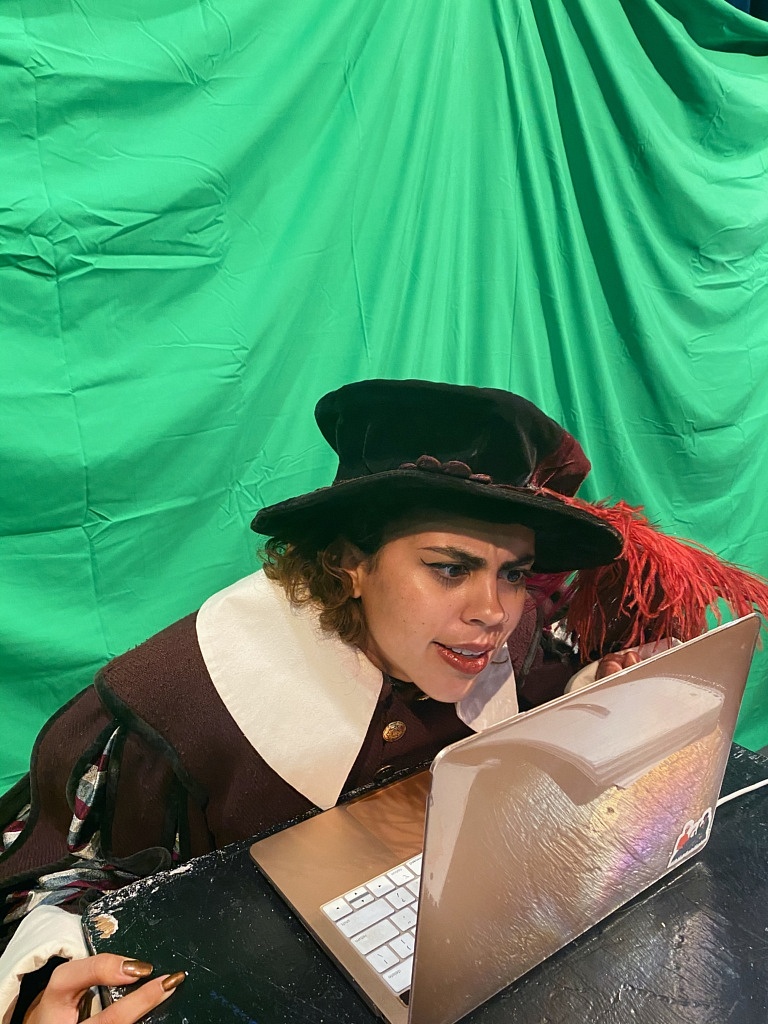 Celine Zamidar performing in Scenes from an Execution, in front of the greenscreen that allows for virtual backdrops and effects.

I ask Celine what helped her get into character during rehearsals and performances. “The thing that has made me feel most connected to the cast have been Molly’s warm-ups,” she says, smiling. “They became an essential thing for this play. I’m going to miss them, honestly.” Jesse’s advice to other performers working online is to “fully commit, and you’ll be OK.” That commitment comes through in his high energy portrayal of Urgentino, a character whose hectic manner is suggested by his name.

The experience for actors is not the only thing that is different from past Mainstages. Sid describes the precautions being taken to avoid any potential spread of COVID-19: “There are a couple of tables on the ground all spaced out from each other and everyone is in masks, as expected. We also moved the lighting and sound boards so that [technical director] Gavin [Fearon] can be alone in the tech booth working on OBS, Zoom, and all the video cues. They moved [assistant technical director] Alex [Sykes]’s sound board down onto the floor of the theatre and he’s in one corner, distanced from the stage management tables. And then I am up in the gallery, with my four computer screens.” All of the seats in the theatre have been pushed against the back wall to allow for the space necessary for the crew to run the show and be as far away from each other as possible. In this production the people who normally occupy small dark spaces out of sight are using more of the theatre than the actors are. 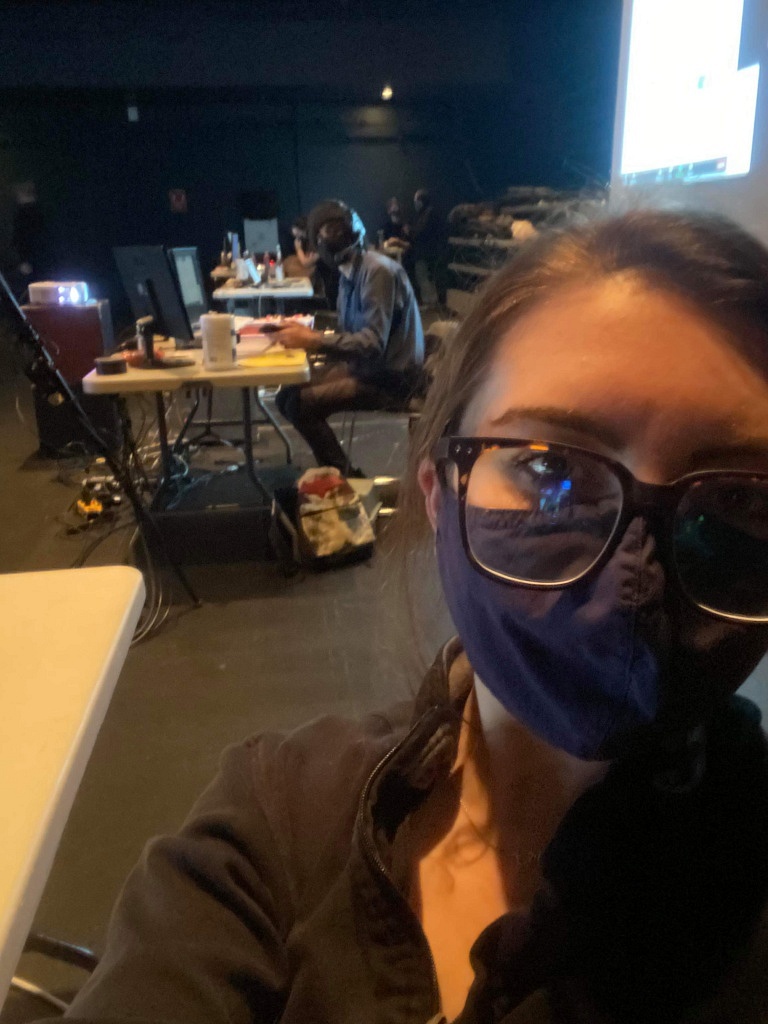 In my previous blog I wrote about the margin of potential error in a show that is so tech-heavy and that is innovating new ways to use technology; this makes troubleshooting a lot more difficult. Sid describes how this affects her pre-show process. “I’ll have to find out what’s not going to work today.” With each performance the crew discovers new glitches they have to fix before the digital curtains open again.

Sid describes her experience of unreliable technology during the touch-up rehearsal on the Thursday before the final weekend of performances. “My lighting board just failed,” she says. “It wouldn’t read the disk. So we’re in pre-show, the actors are getting into their costumes and we’re taking apart the lighting board and trying to figure out what’s going wrong with it.” She takes a deep breath and goes on: “We decided we didn’t have time, so Gavin went and brought in a whole new lighting board. So, we had to set that up and open the show on it. Then we get to the sound board and of course, sound is now also not working so we have to restart the computer three times.”

Sid Malcolm at her tech table in the Marilyn I. Walker Theatre. Photo by Alex Sykes.

Sid laughs and shakes her head: “You know it’s bad if you go on comms and you say ‘hey Gavin, why is this happening?’ and he’s like “I have no idea’.” Gavin is a very experienced professional technician and instructor, and Sid’s comments highlight what a challenge this show has been.

Celine plays Sketchbook, who describes the paintings and drawings throughout Barker’s play. For this production, director David Fancy, Celine, Molly, and I have worked together to insert the character into more scenes, to give commentary on the events as they unfold. The main purpose of this is to address the inherent racism and xenophobia of the Crusades, which are a big part of the dramaturgical world of the play. Barker’s text could have been left as is, but it didn’t feel right to Celine or David not to address these issues when the play’s subject matter invites an opportunity to do so.

This was not only Celine’s first time performing in a Mainstage, it was also her first time writing her own lines. “I don’t think of myself as the greatest writer,” she says, “so when I started I was very hesitant.” She explains how she got over her uncertainty: “I feel like a lot of things, whether they related to me personally or not, fueled me to just use the anger or passion, and the lines just started coming.” Her lines draw from Howard Barker’s style, her own words, current events, and revolutionary poetry that Celine and I read as research. These poems include “About my Rights” by June Jordan, “Bullet Points” by Jericho Brown, “Between the World and Me” by Langston Hughes, and “The President Visits the Storm” by Shane McCrae.

Sid says she dove into work in this medium with optimism: “I feel like it was interesting to work in a way that I’ve never experienced.” Celine highlights the biggest thing she is taking away from working on this show: “I want people to know that nothing is impossible, clearly. I’m sure people thought that a show like this would be impossible to do online and I think we’ve done something pretty great here. Be ambitious, is all I’m saying.”

Here’s my DARTcritic colleague Holly with her latest vlog, which covers a number of weeks of rehearsal nearly up to opening night!