As the first online Mainstage, Scenes from an Execution has the whole team live-streaming in from their homes. There is one cast member who is bridging an exceptional distance through his participation in the Mainstage: Diego Blanco (pictured above) is performing and rehearsing from Querétaro, Mexico.

Diego’s experience this year is remarkable because of his location and because this is his third time acting in a Brock Mainstage, and fifth time working on one. Mainstages are competitive to be cast in but they’re also a huge time commitment onstage and behind the scenes. Diego describes why all of this work felt like a necessary part of his university experience: “When I came to Brock I was like ‘I’m just going to try to do as much as I can. Like I’ll hang lights, I’ll do whatever’ because it’s all part of our learning process.”

He describes how even after working on so many productions, rehearsing online has made the process feel new again: “There are some cast members who I’ve actually never met in person.” He says, emphasizing the importance of reaching out and making small talk in between scenes, whether that’s using the chat function on Zoom or sending a Facebook message, “I think that’s the magic of theatre. It brings us together.”

The role Diego plays is Ostensible, a cardinal of the Venetian church. He describes himself as the villain of the play, who commissions a painting of the Battle of Lepanto, glorifying the slaughter of Muslims at the end of the Crusades. Painter Anna Galactia (played by Holly Hebert) paints the violence as brutal and unnecessary, contrary to the political desire of the state. Seeing Diego, who is an experienced upper-year student, in such an important role is no surprise, but to those who know him the gleeful callousness he plays is nothing like the friendly, delightful person he really is.

This brought us to one of the biggest challenges of the show in Diego’s opinion: “We want to create a show where people want to stay with us, because it’s so easy to just turn off your computer if the show is boring. But if you go out to see a show, you’d be embarrassed to leave. So the biggest challenge is making something creative that people will enjoy and be interested in.” By offering unexpected character choices and dynamic experiments with Zoom the production aims to grab the attention of audiences and never let it go.

We talk about how much has changed since March. When the world went into lockdown, the One Acts (a festival of short plays in Brock’s Dramatic Arts department directed by third-year students), which Diego was acting in, were cancelled. He thought the pandemic would all be over by September, and that we were going to be able to do the Mainstage as usual. He commends the tenacity of the department and director David Fancy in particular. “A lot of universities cancelled shows […] but David is like ‘let’s do this.’”

Everyone on the team for this show is adapting to challenges, and despite his excitement, Diego acknowledges that there are losses. When rehearsing face to face in a studio, “you get to know people.” He describes how he and I acted in two shows together, the fall Mainstage last year, Orlando, also directed by David Fancy, and The Worker, a One Act from the year before directed by Rachel Frederick. We also both worked in production capacities on Perdita, or The Winter’s Tale, the Winter 2020 Mainstage. It’s true that working together on those productions and spending so much time together in person created an opportunity to become close in a way that is more difficult when people are separated by screens. 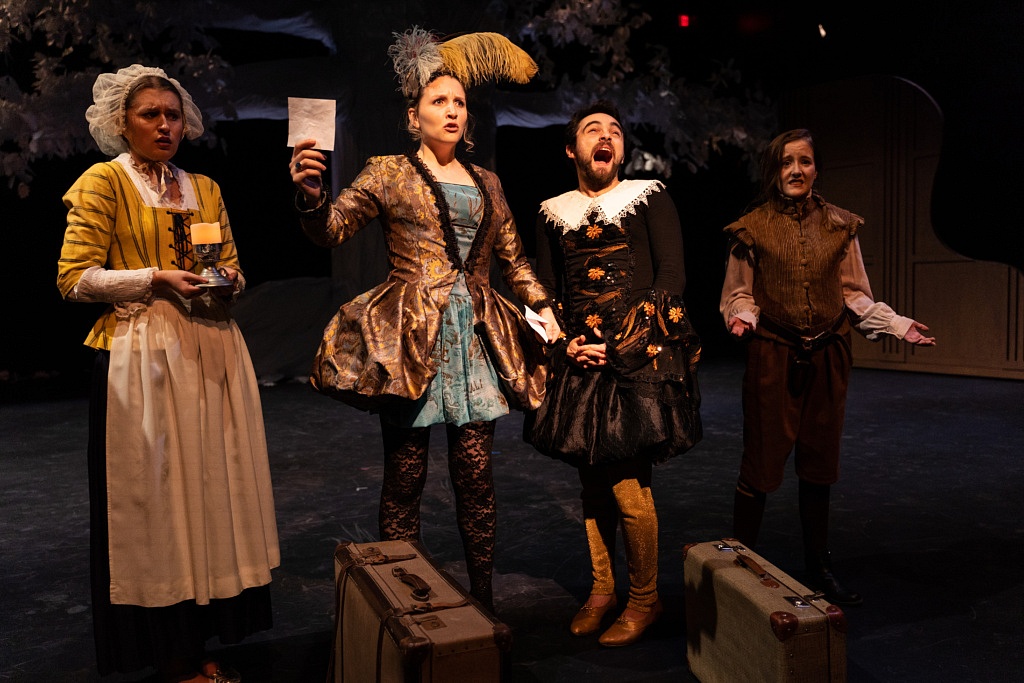 It is, however, not impossible to overcome the gap that the online rehearsal studio creates. Diego describes some of his strategies: “I try to go to warmups even when I don’t have a scene, because I feel like that’s part of the cast bonding. Just being there and present to show that I’m supporting them and sending them all the energy that I have.” As dramaturg, I too sometimes warm up with the cast just to be supportive, and so does the stage management team.

Diego describes the effects of the COVID-19 pandemic as he sees it, from his perspective in Mexico: “It’s different here than in Canada […] not only time zones but because of how COVID is affecting these two countries.”  He described the lack of enforcement concerning social distancing and masks in Mexico and how frustrating that is. In general the global lack of control over the virus is a source of concern: “if things were better maybe we could all be putting on a show together” he says, referring to the company of Scenes from an Execution who won’t have an opportunity to occupy the same space for an unforeseeable amount of time.

“Artists around the world have been losing so much,” he says, while at the same time acknowledging that the pandemic is bigger than any of us, and safety is more important than going on with life as before.

Diego speaks to the importance of art even when it must adapt to the circumstances: “By working on different productions you learn not only to be a better actor but a better human overall.” He describes how working on productions as an actor, stage manager, or part of the stage crew makes you consider all the work that individuals put in to make a show. This resonates with me. I’ve worked on three Mainstages in three different areas, as an actor, sound operator/crew and now as the dramaturg. Every production I’ve worked on has been the result of many people working together towards a common goal. The ones where everyone looked out for each other felt the most successful. I think we all need to remember how to be better humans, to be kind to each other in the face of difficulty, in theatre production and in life.

Here now is the latest vlog from my fellow DARTcritic Holly, in which she talks about, among other things, working through an intense scene with Diego!