Essential Collective Theatre hits the mark in almost every aspect of their production of Hannah Moscovitch’s East of Berlin, but in trying to broach some difficult subject matter, the company may be taking risks with audiences involving a large number of university students. Some issues raised toward the end of the play are where my concerns lie – but let’s start with more about the positive, as there are many aspects of the play and production that are impressive. The program boasts that the script is “a tour de force by one of Canada’s leading playwrights” and I am tempted to agree. Moscovitch’s story about the intergenerational effects of the Holocaust is both poignant and heartbreaking, and the performances, direction (by Jocelyn Adema), and set design (by James McCoy) compliment her story perfectly.

The play follows Rudi (François Macdonald), who finds out his father was a doctor at Auschwitz after his classmate Hermann (Jordan Shore) lets it slip during a high school science class, dissecting beetles and telling Rudi, “that’s what your father did to the Jews.” When Rudi sees the proof in a photograph of his father at Auschwitz, his life completely changes. He moves from where he grew up in Paraguay to Germany in an attempt to start a new life, where he meets and falls in love with a young Jewish woman named Sarah (Rachel VanDuzer). However, the knowledge of his father’s past has left him permanently scarred, and try as he might, he cannot escape it. He finds himself caught in lies, guilt, and is forced to make harrowing decisions.

McCoy’s set design is striking. The ground is covered in cigarette butts, and while the space is almost completely bare otherwise, there are a series of doors that line the back of the stage. At first, the doors seem to add unnecessary clutter to the stage, especially considering most are never used, until a powerful scene depicting Sarah walking through Auschwitz as represented by the hallway of doors. There’s a monologue Rudi delivers at this point in which he imagines having a family with her as she walks, and she has a brief moment where she spins, carefree, before crossing behind a door and returning to her slow, sorrowful walk. This image alone fills the doors with so much meaning and tugs at the heartstrings so strongly that it makes them worth it as a scenic device.

All three actors give compelling performances. Moscovitch’s words seem to come so naturally to them that they make acting look easy (it’s not). VanDuzer is perfectly cast as the smart, headstrong Sarah. She carries herself with grace and a kind of quiet sadness of a woman who, like Rudi, has also been affected by her parents’ past. Shore steals every scene he’s in. He completely embodies the voice and movements of a seventeen-year-old boy, from the energy radiating in his fidgety palms to the slight intonations of his voice that suggest an air of immaturity and innocence that comes with being a high school student not yet exposed to the harsh realities of the adult world. 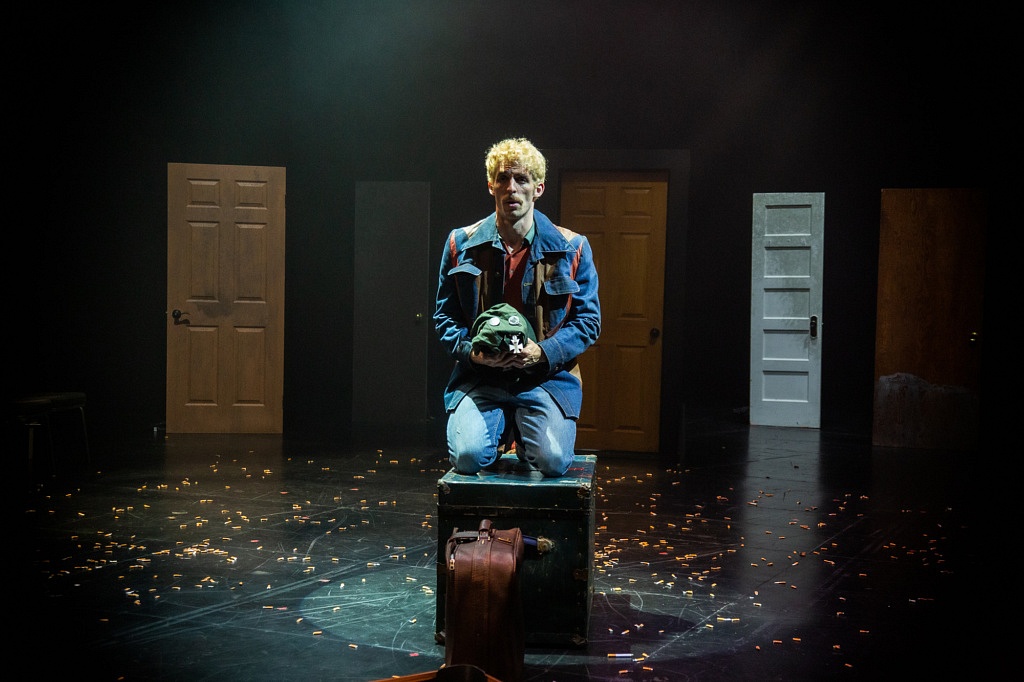 Macdonald has the challenging job of keeping the audience’s attention throughout the ninety-minute drama – he serves as a narrator for a good portion of the story, and never leaves the stage. He skillfully manoeuvres his way from portraying a high school student innocently discovering his father’s dark past for the first time to playing a young man seven years later, hardened by the realities of his life that have led him to the darkest of places. I’ve struggled with Rudi’s character. I was furious with him for lying to the people he cares about and acting so selfishly that eventually I got goosebumps just from seeing him onstage and thinking, “wow, I hate that guy.” Once I left the theatre and had a chance to reflect on what I’d seen, I felt compelled to re-examine my feelings towards him. He’s far from a perfect person, but that’s the point. The horrors of WWII didn’t stop when the war was over. We are all directly affected by our history, and Rudi carried the guilt he felt for his father’s actions that had an effect on all of his decisions.

The shining star of the show is Moscovitch’s story. It’s so good, it’s hard to put it into words. It’s a roller coaster of human emotions and moments – first love, betrayal, heartbreak, innocence, guilt. It constantly propels itself forward, and the second half especially is so full of heartbreaking twists and turns, I kept putting my hand to my mouth in shock and audibly gasping. All of the characters are fascinating, none of them perfect, and the same time I can understand where each person is coming from. Watching Rudi struggle to make amends for the wrongs his father did in his own ways, struggle with the guilt that feeds away at his heart but try so hard to do what he thinks is right is equal parts compelling and heartbreaking.

There is one thing that has not been sitting very well with me. After talking to a few people after the show, I am in agreement that perhaps there should have been a content warning for suicide. I expect there wasn’t one because there was the potential for the warning itself to be a spoiler. However, as a classmate pointed out, given that this was a required show for many university students, I wonder if it would have been worth it to give us a heads-up considering the rising number of suicides in Canadian universities. While understanding ECT’s potential motivation for not including a content warning, I do think it is something that warrants thinking about.