Andrea Donaldson’s take on Harold Pinter’s Betrayal oozes the same qualities as Emma (Virgilia Griffith)’s yellow jumpsuit, designed by Ken Mackenzie – it’s sexy, elegant, and very 1970s. Pinter wrote the play in 1978, and director Donaldson decided to keep the setting in that time period. In an interview for Intermission, she says,“There’s something really fun about it existing in this separate space from us, and embracing playing in a different era, in the location of London. It feels like it kind of operates in this little bubble that we get to observe that we are separate from.”

I found the opposite to be true, but not in a bad way. The fact it is set in the ‘70s makes it feel more relevant and close to home – despite the fashion and the completely wood-finished walls and tacky furniture (set design also by Mackenzie), the entire play feels like it could be taking place today and I consciously thought to myself about how not much has changed. Secrecy, lies, and marital affairs are just as prevalent today as they were back then, which is telling about our society – are we doomed for some part of ourselves to always be unsatisfied in our relationships? Are human beings not meant to be monogamous? 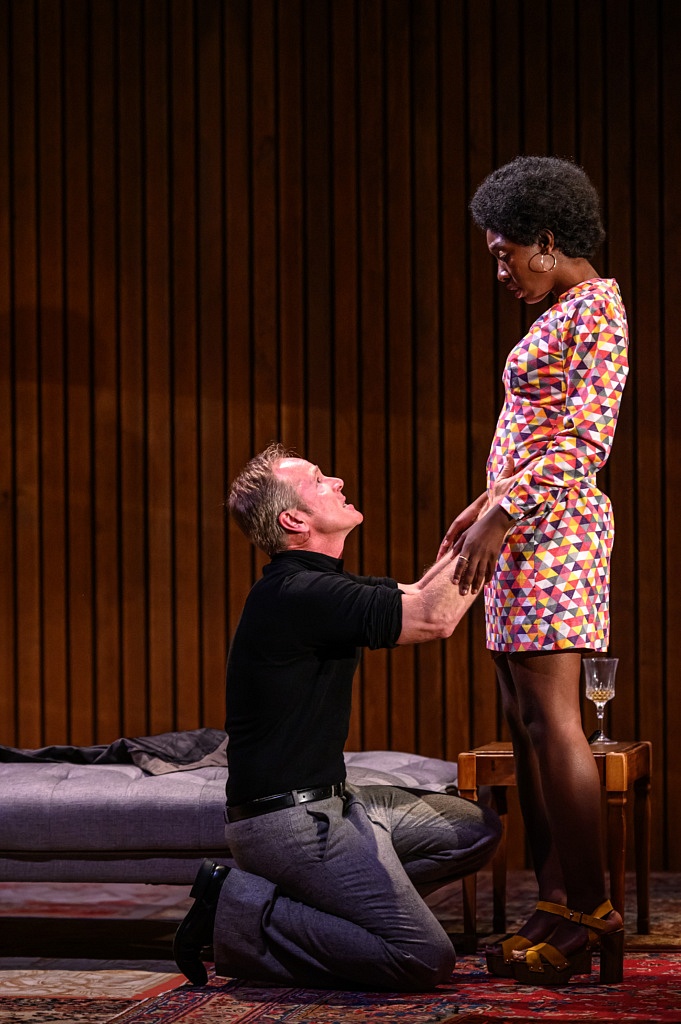 The play follows the lives of Emma, her husband Robert (Jordan Pettle), and his best friend Jerry (Ryan Hollyman), with whom Emma has a seven-year long affair. The play opens with Emma and Jerry meeting up after not having seen each other for a number of years, and proceeds in reverse chronological order. Highlights include the day Robert finds out about them when he sees a letter delivered to Emma from Jerry, the moment Emma tells Jerry she is pregnant with Robert’s baby, and the final scene – the beginning of the affair when Jerry approaches Emma drunk at a party and admits that he is in love with her before they share a kiss.

Donaldson, best known for directing plays by women, said in the Intermission interview that her Betrayal will inevitably have a feminist take:“It’s interesting to be looking at a play that is so steeped in a tradition of maleness. There are some lines in the play that agitate contemporary sensibilities. But it’s fun to think of these lines through a contemporary lens, and through a feminist lens I can’t help but bring.” I would argue that the play itself is already a feminist text. Despite being written by a man nearly fifty years ago, Emma is never the victim of the play and has agency over all her decisions. That being said, it would be easy to direct an Emma who is a clear villain, but Griffith and Donaldson work together to create a more interesting character than just a stereotypical temptress. Griffith portrays her as being suave, cool, and collected, but at the same time we get glimpses of the pain behind her eyes and see that this is a woman who has feelings, who is struggling, who is unhappy and trying to do something about it.

Also notable are the music by Richard Feren and the lighting by Rebecca Picherack. The organ tones in the music and the dim, golden mood lighting work seamlessly together during the scene transitions to create an air of mystery and sensuality. The acting is impressive as well. The actors expertly navigate Pinter’s text, bouncing lines back and forth rapidly in their lead ups to the trademark Pinter pauses, in which the silence during conversations becomes deafening. 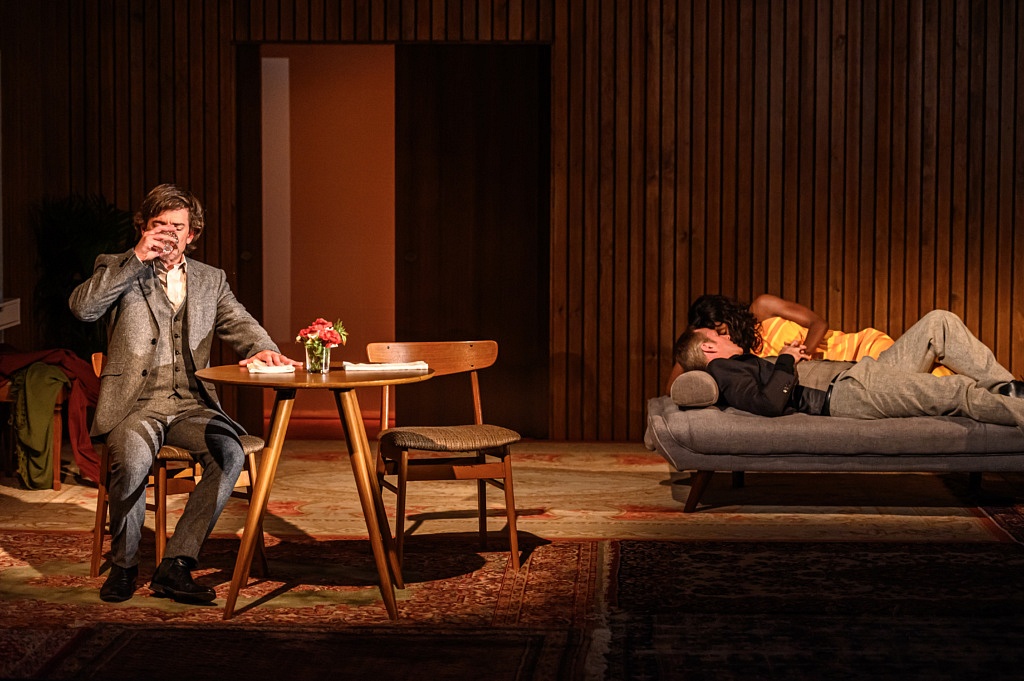 Overall, the production didn’t do anything wrong; however, I wasn’t left feeling much of anything. While the scene where Robert finds out about the affair came the closest to hitting me emotionally, it is hard to feel anything for him because it has already been revealed that he also cheats on Emma. I wanted to feel something for these characters, but they lack any redeemable qualities. Perhaps this was Pinter’s intention: to show people at their rawest, to showcase the dirtiest parts of ourselves that have the capacity to commit the ultimate betrayals. Unfortunately, the result was that I was not invested enough in any of the characters to really care about what happened to them, and found my mind wandering at times away from the play.

The execution of all aspects of the production is good, but there is nothing truly spectacular that made it particularly memorable. I left the theatre content, and will tell people “it was good,” but I wanted to be able to say, “it was great.”

Tags: Andrea Donaldson•Betrayal•Harold Pinter•Soulpepper Theatre
OlderThrowing rocks at the patriarchy: Guilty by Association’s 1991 at In the Soil
NewerNo escape from the past: Moscovich’s story shines in East of Berlin