Student critics voice their thoughts on Theatre Aquarius’ world-premier of Steel City Gangster, written by George F. Walker and directed by Ron Ulrich. The play tracks the life of the notorious organized crime boss and Hamiltonian, Rocco Perri and his partner-in-crime Bessie Starkman. The production ran on the theatre’s Main Stage from March 13th to March 30th. Kristina Testa and Frances Johnson weigh in, with differing verdicts, about the decidedly local tale.

Heavy is the head that wears the crown. This proves to be true for “The King of the Bootleggers,” Rocco Perri and his Queen, Bessie Starkman in Theatre Aquarius’ Main Stage production of George F. Walker’s Steel City Gangster, directed by Ron Ulrich.

Set to the backdrop of early 20th century Hamilton, Ontario, this story follows the lives of two of the most prominent names in bootlegging in Canada. The show begins well after Starkman (Shannon Currie) leaves her husband and two children for Perri (Oliver Becker), and the two begin a tumultuous journey through the world of bootlegging. With her business savvy and his connections, together they thrive in a world full of crime and corruption. But all good things must come to an end, and frankly, the ending of this not-so-good production could not have come sooner.

Before the show starts, patrons including myself hover around the large information boards in the lobby. They illustrate some background information about the real-life background to this play, from Bessie Starkman’s murder to Perri’s eventual disappearance. As a native Hamiltonian, I am not a stranger to the legend that is Rocco Perri and, listening to the much older crowd around me, I am not alone in the anticipation as to what this opening night performance will reveal.

It’s a promising beginning as the curtains part and Doug Paraschuk’s beautiful set is revealed. The main set is an exterior street scene that is black and white with lighted signs of the major businesses of the day. As the production unfolds we are taken to the local bar and Perri and Starkman’s apartment, each following the black-and-white motif with accents of red. This, partnered with sound designer Ramil Sonnadara’s music and Paraschuk’s stunning costumes, transports the audience into a Bogart-esque film noir atmosphere. For me, this is the best part of the production.

Although Currie’s portrayal of the fast-talking Starkman is sharp and quick-witted, it is not strong enough to carry her co-star’s lackluster performance. Becker’s Perri is unmemorable and flat, and the chemistry between the two is barely detectable. Even the scenes between Perri and his mistress and mother of his two children, Lucy Wilson (Maria Dinn), felt forced, making it difficult to believe their relationship. Perri’s cousin Rosario (Tony Munch), acts as Perri’s sidekick. Munch is over the top and almost caricature-ish, telling jokes that unfortunately do not land. Amos Crawley as the journalist Davey and Caroline Toal as Perri and Starkman’s ward and resident prostitute share some humorous moments together. Their chemistry and comedic timing are evident and refreshing.

There are elements of this production that work really well on their own; however, when put together it seems a little disjointed. The second act randomly introduces video projections designed by Corwin Ferguson, which on their own terms are done beautifully. Whether it is rain falling at a funeral, or a video of someone communicating from beyond the grave, the videos themselves are of high quality, but they seem to be dropped in for their own sake. Other than the rain at the funeral, they don’t really fit within the production.

I wanted to like this show; I wanted to be pulled in, but because of the various inconsistencies, and overdone stereotypical depictions of Italian immigrants, it left me quite disappointed. Although aesthetically pleasing to the eye, Steel City Gangster would better be left sleeping with the fishes.

“You can’t fire family” because they will be there for you when no one else is. Steel City Gangster by George F. Walker follows Rocco Perri (Oliver Becker) and his partner both in life and business, Bessie Starkman (Shannon Currie), as they try to run the world of booze and drugs in Hamilton. Directed by Ron Ulrich, the play depicts the lives of these real-life organized-crime figures of the early 1900s. At this time in Canada, the Ontario government had restricted the sale of alcohol. The story emphasizes the importance of family, especially in difficult times. Walker has found an excellent balance of comedic moments in this chilling tale.

Rocco and Bessie find themselves in and out of court defending their criminal activity. With the ring of a bell and a lighting change, the actors step out of the current scene to downstage centre and are now in the courtroom. Lighting designer Siobhán Sleath creates clear images in these sudden courtroom vignettes, as well as smooth transitions from scene to scene. The judge strikes the gavel, the characters are free to go and seamlessly return to the action previously interrupted.

How do you get a dead body off the stage? Rosario (Tony Munch), Rocco’s right-hand man, is given the job of getting rid of the men they kill. Extending the comedic tone, Rosario drags the limp bodies off stage as the audience break out in laughter. Rosario, although loyal to Rocco and Bessie, is not the brightest mobster and provides most of the comic relief in the play. 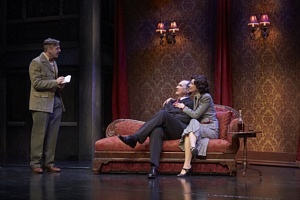 Currie gives a larger-than-life performance as the leading lady behind this story of crime and violence. Rocco and Bessie are in business together, but it is Bessie who makes the big moves. Currie captured the confidence and leadership needed to pull off this stand out role. Walker has taken Hamilton’s most notorious organized crime legends and told their story with depth and humour.

The actors come out one by one for their bows and then sit on a couch centre stage. Conflict aside, they sit together like one big family. They smile out to the audience and, with a flash of a camera like light followed by a blackout, we are left with the image of family.