To close out the coverage of Essential Collective Theatre‘s The Team by our critics, the non-embedding students attended the premiere and closing of the show last month. The Team ran at Theatre Aquarius from March 14-16, and at the First Ontario Performing Arts Centre from March 20-23.
Check out what these new pairs of eyes had to say about the show below:

If you are going to take a shot at a world premiere, The Team is the way to do it. Playwright Michael Kras has created a phenomenal piece that has audiences whispering in shock, stifling laughter, and crying in silence. Produced by Essential Collective Theatre (ECT) and directed by Colin Bruce Anthes, The Team takes the hard things in life and makes the audience confront them in such a flurry of teenage emotions that it cannot be seen as anything other than the real experience of growing up. Bobbie (Lennon Bradford), Alicia (Kaitlin Race), Miranda (Emily Lukasik), Jenna (Laura Welch) and Jess (Kaylyn Valdez Scott); all are under pressure to make it through one more semester, and scared of what that prospect entails for their future. There is a lot riding on the team, and each member has their own expectations weighing them down.

Bobbie is the new team member on White Oak High School girls’ basketball team, and tensions are running high as the season and the year come to a close. All the girls are trying to decide their next steps in life, colliding with each other no matter how hard they try to be a team. Not only does the story itself keep you wanting more and more, the actors only ever seem to give it their all. Bradford is stellar in their performance, their voice ringing through the space in a way that captures every ear. Welch’s portrayal of all the stresses of teenage life and of expectations finally becoming too much is open and genuinely raw, a feeling that every student in the audience can wholly connect with.

The themes that surround the pressures of teenage life are also ingrained in the stage. James McCoy’s design sees the space set up as a basketball court, yet every line is fractured and shattered. Even when the girls move off the court there is a hint of this broken effect, in bathroom mirrors and the lighting. It is an ingenious way to play with The Team’s message; things can always crack under pressure. 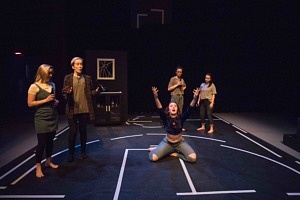 All of the characters come into the play with baggage, facing pressures of school, health, family, and grief. While they try to put all the bad stuff aside, to simply focus on the game and work together as a team, instead of meeting in the middle they collide and create a toxic ricochet. In doing this, The Team has brings into question the old time saying of “leaving things at the door.” When Miranda’s future is dependant on the sport she plays, can she leave that future at the door and not feel the pressure? Can Bobbie simply put her grief for her dead brother on hold when she plays the very game he loved the most? Kras brings this all forth in his writing and Anthes lets the youthfulness in it speak; in doing so the challenges of budding identity, growing apart, and growing close stand out through the girls onstage.

So give The Team a shot. It’s worth it.

Swish! Although this production still has a few more practices to go before it’s ready for the big game, I would still award the world premiere of The Team a significant amount of points this first round. Moving and informative, The Team, directed by Colin Anthes and written by Michael Kras, offers a much-needed look into teen mental health. The play offers up a raw look at teen anxieties, showcasing multiple storylines that express the different and valid anxieties that teenagers can face in their lifetime. When new girl Bobbie (Lennon Bradford) joins the White Oaks Warriors basketball team, she must challenge her fears surrounding her identity, and confront her emotions after her brother’s suicide. Supporting characters include Jenna (Laura Welch), who is dealing with her failure to get into college; Jess (Kaylyn Valdez- Scott), who doesn’t know what to do or where to go; Miranda (Emily Lukasik), who has a future already forced upon her and struggles with her emotionally abusive father; and Alicia (Kaitlin Race), the captain desperate to keep her team together and finish high school.

Although there are many positive moments in The Team, there are also negative aspects to the production. Choreography appears stiff at times, producing awkward and forced moments between characters, offering no illusion of spontaneity. In the scene where Bobbie and Alicia discuss life after high school following Bobbie’s first practice, Alicia makes grand, non-naturalistic gestures that appear to be performed half-heartedly, giving the impression that the actor is uncomfortable with the movement. The production also presents touching moments, revealing to audience members what is happening inside a character’s mind in tableau, such as when Miranda reveals that she believes Bobbie is a poor substitute compared to her superstar brother. Moments like these are too few, showing up early in the play and then never again, making the style appear inconsistent. The character writing is also erratic at times, especially with the character of Bobbie, who quickly transforms from a nervous character into someone with the confidence to stand up to her bully. Although that moment of discovery is special and significant to Bobbie’s growth as a character, those powerful moments need more development before they are added, or else there is a risk of the character’s growth fluctuating between extremes without context.

With all that being said, The Team has dynamic moments that deal with issues of bullying, peer pressure, and the constant anxieties that are forced on students every day. Drawing attention to and discussing these issues brings them into the light and begins to normalize these conversation topics, allowing audiences an opportunity to understand how debilitating anxieties are. This world premiere deserves the silver medal; although it had its issues, it came out strong with a vital message for teens and adults, revealing that mental illness can affect anybody. It has great potential, and with a little more editing (and some practice on its layups), The Team definitely has the chance to bring home the first place trophy.

“A directorial choice I’ve been dying to try,” exclaims director Colin Bruce Anthes as he welcomes everyone back after a fire alarm interrupted some 60 minutes into the 80-minute show. If it weren’t for this “directorial choice”, I may have loved the show. Certainly, until the FirstOntario Performing Arts Centre alarm sounded I was fully investing in the world of the show. Playwright Michael Kras created characters rich with struggles, triumphs, and everything in between.

All five actors (Lennon Bradford, Emily Lukasik, Kaitlin Race, Laura Welch, and Kaylyn Valdez-Scott) bring life to the characters on stage. Each coming to basketball for their own reasons, the vibrant worlds of these five teenage members of a girls’ basketball team fill the stage, as they search for footing moving into their futures after high school. The main focus of the story is Bobbie (Bradford), whose high school basketball star brother has taken his own life. Bobbie is new to the team, and the resulting dynamic sets off a navigation of friendships and the stresses put on youth, as well as fallout after a suicide.

I was all the way into this world, growing worried about the semi-final and who was getting into university, when emergency lights started to flash. Although it didn’t end the show, the 10-minute fire alarm cut the energy. The team made a valiant effort to maintain the show’s momentum; unfortunately, they simply couldn’t regain the audience’s attention the way they had it before. As the show restarted, the energy in the room had dissipated and the beautifully intense moment we had left just moments ago seemed foreign and forced. After the fire alarm, the show ended softly, missing out on the bang it might have had without it. 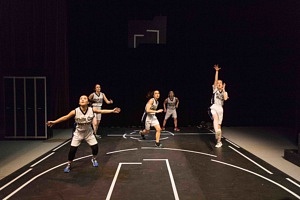 The set design (James McCoy) includes a fractured version of a basketball court on the floor. Every line is broken, reflecting the broken nature of the girls’ team, and their worlds. The set allows for a lot of interesting play in the basketball scenes and adds a vibrant backdrop to everything else. The set may even be too vibrant at times, drawing my eye away and distracting from the main action.

Sound design (Ethan Rising) is also effective in setting the scene, complimenting the set design wonderfully. The show is performed without basketballs, but the sound of balls bouncing as the players dribble and pass creates the illusion of them actually being there. This impressive feat of timing beautifully creates the world while maintaining the brokenness established by the set.

I was cheering for The Team all the way up until the fire alarm. The play so successfully explores these girls’ lives, and by extension the lives of all students. It was well written, directed, designed, performed—just poorly timed. If only they had picked a different moment to try this new directorial choice.