Embedding with ECT: On Encouragement, Freedom, and Commas in Rehearsal for The Team

The second half of our embedding team offers further insight into their visit to The Team‘s rehearsal room.

“Holy shit! – that’s not the line,” the actor Laura Welch shouts as she starts a run-through of a scene, and the room dissolves into helpless giggles. This moment is one among many that shows the ease and camaraderie the cast and creative team of The Team have with each other. As we enter for our first rehearsal visit as critics embedded in the production, the group is just finishing up lunch, sitting on the floor together laughing and chatting. Stage Manager Jessica Campbell Maracle welcomes us warmly and leads us to sit with her at a table to the side. When she calls out 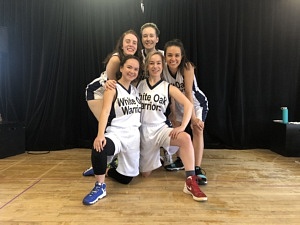 “and we’re back” the actors hop to their feet, ready and eager to play some more. It is obvious that the entire group is having huge amounts of fun creating this production.

Director Colin Anthes picks up where they left off before the break, a tense confrontation scene between Bobbie (Lennon Bradford) and Miranda (Emily Lukasik), as the rest of the team, Jenna (Welsh), Alicia (Kaitlin Race) and Jess (Kaylyn Valdez-Scott), watch on. He encourages the cast to feel free to “try anything at all” and the next hour is a fantastic example of egalitarian theatre-making. The cast brings engaging intention (by which we refer to the reasoning behind what a character says) and physicality to their characters and Anthes comes in to refine certain moments, right down to which letter to emphasize in certain words. Yet his nudges and suggestions never feel like corrections or commands. Anthes is constantly asking his actors to dig that bit deeper, understand their character just that little bit more intimately, and they respond with enthusiasm. Lukasik makes an insightful observation about the abusive nature of her character Miranda’s actions and it adds a new layer to the scene which strengthens its impact and heightens tensions even more. Having this understanding of the situation drawn out of the actors rather than imposed upon them helps the work feel more truthful and realistic.

It was a privilege to have playwright Michael Kras in the room for this rehearsal. For the most part, he watched on, clearly overjoyed to see his creation come to life in the hands of such capable and creative artists. It was interesting to see Anthes occasionally defer to Kras, at one point asking permission to add a comma to a line of dialogue. That level of precision characterizes the entire process—and the play itself. As Anthes often says, the rhythm of the piece, both textually and physically, is integral to its success. It must be played with precision and energy, much like a basketball game. The power is constantly shifting during the play, just like the passing of a basketball. The characters shift and duck around each other, speaking over and under one another in constant motion.

Although the team has chosen not to use real basketballs on stage, due to their unpredictability, they are making use of them in the rehearsal process. Working with these physical props has been essential to the actors’ process. Bradford uses the basketball to help ground them in the scenes. Their character, Bobbie, has a particular emotional connection to her ball, as it belonged to her late brother Ben. His legacy hangs over the girls as they train in the Ben Brantwood Memorial Gym. For all members of the cast, it was important to get a feel for what it is like to work with the basketballs: they use them to get a sense of the weight and impact as well as their uncontrollable movement when dropped. This is yet another example of how the rehearsal process is free-flowing and intuitive.

It was evident that extensive work had been done between this rehearsal and our previous meeting. Anthes previously mentioned breaking down the script to identify specific speech patterns. During this rehearsal, for 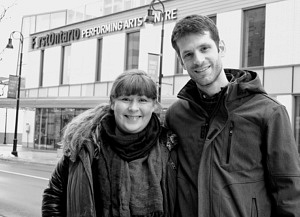 example, he referred to “work” as a Miranda word, and urged Lukasik to use this to inform her choices. When she is taunting Bobbie, does she see it as pushing her to work harder? Could that be her justification? Considerations such as these were ongoing and it was clear that emphasizing the character’s speech patterns helped the actors to dig into who their characters were, even on a subconscious level.

As a first glimpse at rehearsals, today was impressive. Seeing an honest and unflinching script like this one in the hands of such a talented and driven cast was exciting. Rehearsals ended with a run-through of what material they had covered so far—almost half the script, including an emotionally raw conversation between Bobbie and Alicia and a high-paced (and highly convincing) basketball game sequence. We are excited to see how the show looks in a week’s time after further refinement and exploration.