Embedding with ECT: Balancing Vulnerability and the Details in Rehearsal for The Team

After interviewing part of creative team for Essential Theatre Collective‘s production of The Team, our five embedders split into two groups to provide a broader range of perspectives and more coverage of the process.

On the chillyafternoon of March 1st, we approach Suitcase in Point’s rehearsal space with a mixed bag of emotions. We thoughtfully anticipate the experiences that the next three hours will hold. We are promptly met by the stage manager, Jessica Campbell Maracle, at the entrance of Suitcase in Point. She informs us that this rehearsal will be particularly intense, as the artists will be blocking the party scene – in other words, the emotional climax of the play. Due to emotionally intimate content, she informs us that, in order to respect the comfort of the performers, we might be asked to step out of the room while particular moments are being rehearsed. We make our way up the creaky staircase, take off our shoes, and anxiously stand at the door, the precipice, of Essential Theatre Collective (ECT)’s creative space. 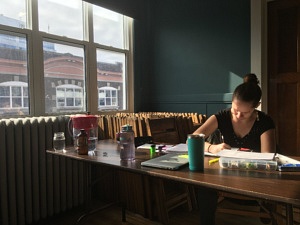 Upon entering the studio, we notice that director Colin Anthes is the only male artist in the room. We join the artists in the middle of their work on the party scene. Anthes works with the cast as assistant director and recent Brock graduate Michelle Mohammed observes the work.

According to Anthes, the artists’ goal is to block at least 10% of the show in each rehearsal; however, this particular scene has taken two full rehearsal days to master. The party scene has many intricacies, such as minute focal points, the use of cell phones, and nuanced intercharacter communication. As anticipated, we observe that the space is highly collaborative, as Anthes works with the artists to create their individual tracks. A track describes the path taken by a character, based on the character’s cognitive and physical motivation, personality, and purposes. For example, when working on Jenna (Laura Welch)’s track, the artists spend almost 15 minutes deciding which direction Jenna’s eyes should be looking while she utters the line, “Oh my god, it looks so bad Miranda!”. In our observation, it seems the process of creating a track relies heavily on thoughtful trial and error, which inherently results in a lot of stopping and starting. No line, word, nor movement is left behind.

The artists layer each element of their characters, be it speech, movement, relationship, etc., one on top of the other. After clocking their stop-and-start rehearsal process (that is cognitively experiencing each moment of the scenework in order to commit it to memory), the actors take the scene from the top. On Anthes’ calm “as you’re ready,” all of the intricate work that we witnessed throughout the detailed rehearsal is put into practice. After running the full scene, there is no catharsis of applause, but instead, we are caught in the challenging, yet beautiful, emotional intensity of the journey the actors took us on.

Anthes seems attuned to the cast. He is like the conductor of an orchestra, processing and conjoining every track as if it were a symphonic melody line. Amidst the emotionally intense rehearsal, he encourages the actors to take multiple breaks, so that they can regroup. When refining climatic scene work, we noticed that Anthes asks the performers to practice with 60% of their energy, allowing them to fully absorb the detailed directorial suggestions and avoid burnout. We also note the careful way in which Anthes offers direction; for example, he will say phrases like, “Lennon playing Bobbie, try crossing downstage right.” According to the performers, his method of creating cognitive distance between performer and character is helpful in maintaining emotional safety, as the content of the playtext can be heavy. 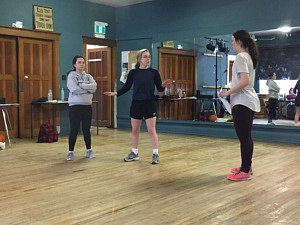 At the end of this section of rehearsal, the whole team reflects in a group circle. As Anthes sits with the team, he provides them with technical notes. The floor is open to anyone who would like to offer their feelings and/or clear up any sort of misunderstanding that may have occurred during the rehearsal. In turn, some of the actors share their pride for the successful work the team has accomplished this far in the process. This reflective practice is done in order to exchange constructive, positive attitudes as the rehearsal comes to a close. The group calls this process of sharing their check-out.

After this, we are asked to step out of the studio to allow Lennon Bradford and Kaitlin Race (Alicia) space to work privately with Anthes. We take the opportunity to speak with Kaylyn Valdez-Scott (Jess), Laura Welch (Jenna), and Emily Lukasik (Miranda) about their experiences working on The Team thus far. We ask them about the verbal choreography required by Michael Kras’ script in performance. Lukasik explains that the script’s dialogue “is just like music.” She compares it to a Sondheim score, which often includes complex rhythm and overlapping lines in the libretto. 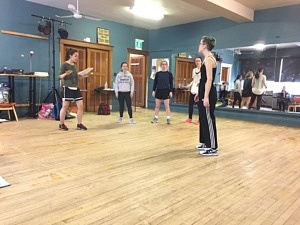 Although the actors are not off-book yet, they have a thorough understanding of the innate musicality within Kras’ script. Additionally, the cast members comment on the creation process,

affirming that there is an explicit, mutual respect between director and performers, both inside and outside of the rehearsal space. Based on our discussion with them, it seems that the creative team works hard to create a secure environment wherein complex emotional work can be accomplished.

As we make our way back into the rehearsal space, Anthes is working on a scene with Lukasik and Bradford. Both actors freely explore physicality and intentionality (that is, the processes of reasoning that motivate a character’s choices), while Anthes provides them with feedback.

Although, at times, we felt like voyeurs peeking in on intimate moments shared between close friends, embedding in our first rehearsal with ECT was a positive and educational experience. Tomorrow, which is notably International Women’s Day (IWD), will be our last embedding session with ECT. We are lookingforward to spending IWD with such an inspiring group of creators, whose work exemplifies the equality of all genders in process and content.