Toxic Masculinity in The Scavenger’s Daughter: Endorsement or Condemnation?

Members of the DARTcritics class of 2019 deliberate on the nature of masculinity and how it manifested itself in PARADIGM Productions‘ premiere of The Scavenger’s Daughter. The show ran from January 15th – 27th and was presented at Buddies in Bad Times Theatre.

Dispatch: More Cook. Characters call to dispatch using microphones that fall from the sky like a cage wrestling match; in these moments we see the world of war unfold. And the masculinity of war has never been as alive as it is with Cook (Christopher Stanton). Stanton has the audience laughing one moment and horrified the next, adding vibrancy to the obedient Cook. As the villain, victim, rule maker and follower, the subtleties of Cook shine in an already sparkling show. 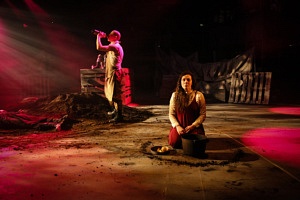 Christopher Stanton and Samantha Brown in The Scavenger’s Daughter. Photo by Haley Garnett.

In The Scavenger’s Daughter, playwright Susanna Fournier explores masculinity in a morphine-, sex-, friendship-, and cannibalism-fuelled war story. The protagonist Jack (Josh Johnston) is molded by the war, by his friend Ash (Conor Wylie), by Cook, by his superior Webb (Carlos González-Vio), by his fiancée’s family, and by brothel owner Sarah (Samantha Brown), each teaching him their version of masculinity. Jack learns to fight, read, be free, and be a man.

The story is told through narrative projection, and characters’ direct narration. The sound design (Ben McCarthy) and projection design (Wesley McKenzie) tell a story that surrounds you as though you were in the middle of war. The audience enters through a roll-up door that shuts suddenly and loudly as the show begins. Director Ted Witzel builds an atmosphere that holds the audience in suspense.

This suspense is heightened as Jack emerges from a pile of dirt wearing only a gas mask. The nudity feels somewhat unnecessary, however, and makes this important show less accessible to audience members who might find this triggering. Paired with the gas mask, Jack’s nakedness is presented as a strange or dangerous thing, a message that doesn’t seem to fit with the rest of the show. 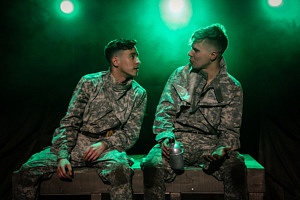 Conor Wylie and John Johnston in The Scavenger’s Daughter. Photo by Haley Garnett.

The Scavenger’s Daughter presents masculinity to us as it is formed; we watch the teaching happen. The play takes the time to examine the root of the problem, rather than blame the symptom. As a male spectator, this chance for young and old men alike to see what is so often invisible has the utmost value. The play asks the question: is this really what masculinity must be? Can we teach ourselves, our friends, and our sons, another way?

The Scavenger’s Daughter is a brilliant example of leading with a subject, and driving it home to everyone who enters the room. If you feel you know masculinity, or if you feel you don’t, you could use this lesson from Fournier and Witzel.

This performance made me uncomfortable for all the wrong reasons.

The Scavenger’s Daughter shocks the senses with engaging and jarring Rated R content, though it is generally unclear as to why. With an overwhelming use of bright lights, loud noises, foul language, and firearms, the production elements in this piece are used so frivolously it invalidates their purpose. Intertwined with excessive displays of sexism, classism, heteronormativity, militarism, and toxic masculinity, this production’s crassness is undoubtedly intentional, questionably satirical, and simply just offensive.

Carlos Gonzalez-Vio in The Scavenger’s Daughter. Photo by Haley Garnett.

The Empire, created by Susanna Fournier, is a trilogy of performances which narrate moments within a fictive universe’s history. Each performance has its own objective. The Scavenger’s Daughter, positioned as the trilogy’s centrepiece, was created to reflect on how male intimacy and aggression are cultivated in the face of Imperialism. While I champion a dialogue that seeks the root of toxic masculinity, this show restricts its own potential and fails to deliver its message.

Comprised of historical anecdotes and directed by Ted Witzel, this hodgepodge plot follows Jack (Josh Johnston) and Ash (Conor Wylie) as they complicate love, heritage, and Imperial duty with the complexities of socially ingrained masculinity. Both orphan soldiers, bonded by a warzone upbringing, they long for civilian status. But when Jack is given the chance for freedom, he is forced to question more than just his loyalty to Ash. The proposition to marry into a wealthy family means citizenship and the privileges of literacy, but it also means that Jack must betray his beloved Sarah (Samantha Brown), a local in the nearby town. When her mother dies in relation to the heroin crisis Ash is involved in, Sarah’s role develops as she inherits operation of the local brothel. However, being the only woman on stage highlights Sarah as further endorsing the commodification of female sexuality and insinuates an unfortunate justification of toxic masculinity. 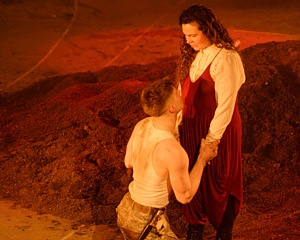 Josh Johnston and Samantha Brown in The Scavenger’s Daughter. Photo by Bernie Fournier.

It may be entertaining, but when history is shown out of context, we are unable to see how it has affected us; this is The Scavenger’s Daughter’s flaw. Though intending to show how historic structures (like Imperialism) have molded current ideologies (like masculinity), this show’s intersection of historic timelines and events, both real and fake, restricts the potential impact of the performance. The Scavenger’s Daughter separates the construct of masculinity from the history that created it; and the takeaway is that these structures are ever-present and, dare I say, natural pieces of human existence. Paralleled in the overuse of “isms” and obscene production techniques, lack of context and purpose converts alienation into instigation; and rather than critiquing toxic masculinity, this show endorses it.

Overall, this show’s over-stimulating production techniques, exploitation of “isms,” and misplaced historical context erodes its ability to critique masculinity. Rather than grounding the performance, these elements act as an overcompensating distraction from sporadic and uncomfortable scenes. Creative decisions aside, there remains an alarming misalignment between The Scavenger’s Daughter and its proposed intentions, resulting in a production that lacks depth and cohesion.