Trial Runs and Moving Backwards to Move Forward: The Final Rehearsal Days of This Will Be Excellent

A technical rehearsal for a show with no lighting design is definitely not your typical tech. Our next rehearsal visit is during the series of technical and dress rehearsals, in the final days before This Will Be Excellent’s first performance. These rehearsals, however, operate is a bit different than a traditional tech/dress. As This Will Be Excellent is a show that tours local schools, not local theatres, their final rehearsals were spent in very unusual way.

We attended the final rehearsal day before their first performance. Early in the week, the cast and creatives had staged a tech/dress at a local school, and we were shown pictures of the cast in the gymnasium amidst a crowd of children. They held this practice performance to both familiarize the cast with the environment – as actors must familiarize themselves to a stage or set in a traditional production – and to have a “trial run” in front of their unpredictable, young audience. Rehearsals afterwards, like the one we attended, were in response to this event, to ensure the actors were ready for the challenge of performance ahead.

What we witnessed, therefore, might have looked from the outside like an average rehearsal day. As Erin Brubacher explains, however, they move “backwards” in the process (by clarifying, refining, and looking at small details) before going “forward” into performances – a last tune up before leaving the comfort of the rehearsal hall.

During this rehearsal we also see some of the costumes and props for the first time. The set and costume designer, Anahita Debonehie, is also present during the technical rehearsal, finishing some posters for the frame unit, which are attached by magnets. Excellent is centered on an imaginary rapper, Arrow, who the main characters invite to their school. The team has invented Arrow’s branding and logos, which are prominently displayed on sweaters and hats. 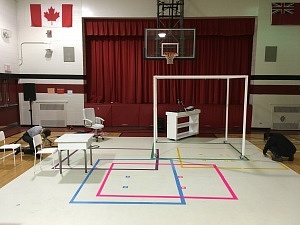 As we walk into the Carousel Players’ rehearsal room, Theo and Maddie stand facing each other, with Maddie on one side of the rehearsal hall and Theo the other. Brubacher explains they are working on pacing and accelerating the momentum of the scenes. The actors put distance between each other in this rehearsal exercise in order to focus on the vocal projection needed to reach the audience. Additionally, they do not have to worry about their blocking, and can focus on the objectives behind what they are saying.

Their work on pacing has noticeable effects. For instance, the first scene they work on ends a minute shorter than in previous runs. Brubacher directs the pacing, acting as a “conductor”; through hand signals to Theo and Maddie, she indicates when the pace should increase or decrease. The focus seems to be on removing the “beats” or pauses between the lines, and driving the thoughts forward. This line drilling is quite intense – a mistake in the lines means stopping, flagging the problem, and starting from the top again. This happens rarely, however – a mark of many repetitions in their previous rehearsals. Another technique the team uses is to “Italian run” a scene, which involves speaking the lines at an elevated pace to ensure clarity before running the scene with blocking. 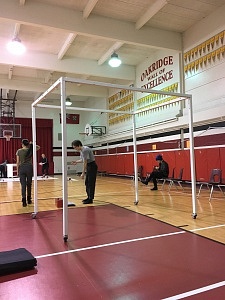 Something that we have noticed throughout the rehearsal process, but is highly apparent so close to the first performance, is how the content of the show itself seems forever in flux. The actors always have new lines that they check against stage manager Maureen Callaghan’s prompt book each time we attend, and the blocking is in a constant state of revision and refinement. As actors ourselves, we sympathize with the amount of work this must pose. Given that Excellent is a new play, and from our conversations with Brubacher, we assume that some parts are subject to change, especially early in the process. Still seeing these changes on the last day of rehearsal, however, we wonder how this will translate into their imminent first performance.

Thus far, we have watched the pieces of a show being polished, and witnessed the discovery of small but important moments within the performance. Despite the technical nature of the work, we are struck again by the incredible amount of effort that goes into even the tiniest detail of a show, and how this process continues until the very end. With this in mind, we are eager to see This Will Be Excellent, both in its entirety, and in front of its daunting (and unpredictable) audience.