This Is A Deliberation On Canadian Stage’s Declarations

The DARTcritics class of 2018 share their thoughts on Jordan Tannahill’s newest play Declarations, a post-dramatic exploration of grief that premiered at Toronto’s Canadian Stage in January:

How does one approach the imminent loss of a parent? In the case of Jordan Tannahill the answers are exquisitely painted in his art. A direct response to his mother being given less than two years to live, the script or “score” of the aptly titled Declarations was conceived and realized over the course of an emotional six-hour flight home. Billed as an “ode to mortality,” Tannahill’s beautifully simple production has found its home at Canadian Stage’s Berkeley Street Theatre.

Tannahill’s long standing and well documented fascination with the concept of the post-dramatic seems to be a guiding force behind this production. Taking up a decidedly unique format of declarative statements accompanied by improvised moment, five actors explore the concrete world of the sparse stage physically and vocally. This spontaneous interpretation of the text is a thrilling risk that breathes life into the piece, bringing about a sense that all of this is truly occurring in the moment. Declarations does not satisfy the common desire for theatre that is easy to consume – nor does it strive to.

The production manages to feel simultaneously frantic and purposefully slow; it’s format, though inventive, occasionally becomes tiresome. Liz Peterson, whose individual performance begins the show and persists well into the 70-minute run-time, begins to feel stranded on stage before eventually being joined by fellow ensemble member Jennifer Dahl. Once all five ensemble members converge, however, the show finds a significantly greater sense of drive and variety in its execution.

Given Tannahill’s inspiration for this work, one might assume that it is an inherently sad show, that it is a heavy and unrelenting viewing experience. This is not the case; Declarations manages to bring forth a joyful noise despite its somber roots. The ensemble works together to build vivid imagery of the world we all recognize; if anything, this play is a celebration of life’s perseverance, not its end.

As the show draws to a close, the performer’s stand unified on the stage while the most revealing declaration of the piece is uttered; “this is what grief looks like” is a passage of the text that comes to encapsulate Tannahill’s production best. This play is perhaps, at its core, a reflection of Tannahill’s own grief, an expression of his desire to reclaim the world around him, to declare that he will continue to exist. With its powerful ensemble, honest nature, and highly experimental format, Declarations is a truly unique theatre going experience. This is worth seeing.

In his playwright’s note included in the program for the show, Jordan Tannahill writes about how Declarations emerged from finding out his mother was given the news that she had two years to live. He struggled with the impossible task of “articulating the entirety of a life” within the archive of a performance. Art, he says, occupies the space between human experience and the failure to fully articulate said experience. 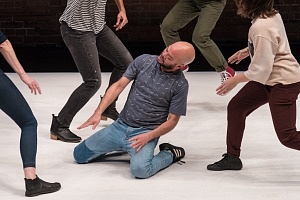 And so, wrestling against this impossibility, Declarations was created. This show, running at the Canadian Stage Berkeley Street Theatre, is an experience rather than a coherent storyline of events. Almost every single line spoken within the 70 minutes of the show begins with the words “This is,” as the ensemble (Robert Abubo, Danielle Baskerville, Jennifer Dahl, Philip Nozuka, and Liz Peterson) declare the experiences of life to the audience. These experiences range from sweet – “This is how I hold your hand” – to scary – “This is my blood” – to bizarrely hilarious – “This is an unremarkable blowjob”. Each declaration is accompanied by movements that are organically and spontaneously produced by the five performers on stage. While some movements are very nail-on-the-head, such as pretending to type at a computer, others are far more abstract. After all, how does one create a literal movement for the declaration “This is the colour yellow” using only their bodies?

Yet, despite how nonlinear the show is in nature, it still manages to express a narrative. Not a specific story, but the all-encapsulating narrative of humanity: dichotomy. Polar opposites. Declarations is about life and, in the same breath, it is about death. The show expresses joy and grief. Love and loss. Light and dark. At one point, the performers, while chanting around the stage, express two different reasons for someone needing to shake—shaking with laughter versus shaking with tears.

This is what life is. Tannahill manages to capture the fleeting imperviousness of everything within a life; what is solid and present and real in one moment is not the next. This not only applies to specific feelings, but to people, too. His mother.

Declarations is a wonderfully honest tribute to the stubborn perseverance of the human experience amidst a tornado of emotions and events. It is quite the mouthful to digest, with strange and question-inciting flavours, but well worth the time investment.

Jordan Tannahill sets his new play Declarations up for failure. Despite some faltering moments, however, this production is everything but a failure. Declarations creates something pure, raw, and very humanly honest.

Tannahill explains in his program note that he wrote the play on a 6-hour flight back home after finding out his mother was dying. I would not call this production a performance one could just go and see; this is an experience. The play is full of declarations, as the name already hints. These declarations are as simple as “This is my left hand,””This is my right hand,””This is the morning sun,””This is an unremarkable blowjob,””This is a miscarriage,” and “This is my mother laughing”. This seemingly aimless jumping around reflects the puzzle that one’s mind has to put together when their whole world has crashed. Nothing about this approach is linear – it lets us see the human emotion during those shattering moments in our lives where simply sticking to one thought and unpacking it seems like an impossible task. 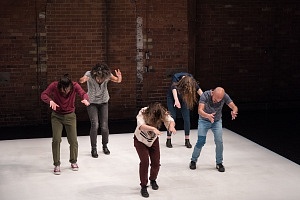 The only thing that is fixed and certain during those 70 minutes is the text, which acts as the score for the performers. This text runs on teleprompters throughout the whole show, a fact that is flagged for the audience before the show begins by performer Philip Nozuka. Even though the play text does not change, the gestures and movements with the text do – the performers speak out the declaration and create the gestures then, on the spot, whatever comes to their mind. There is no time to think or regret, everyone has to accept these choices made on stage.

I have to say that sometimes my mind did wander and I found I was not necessarily paying attention to what was said or done. Nevertheless, those moments do not lose their importance or meaning because of it. It is as if I was supposed to go into my own mind and memories, dig around and connect to those feelings. This play is very honest in its description of grief, moving from sporadic thoughts to half-baked memories. In the first half, the performers (Liz Peterson, Jennifer Dahl, Danielle Baskerville, Robert Abubo, and Philip Nozuka) say a line followed by an action or reaction to it. The second half is more about stories and flashbacks, such as describing the mother running after the bus in her slippers because her child forgot their phone. It is a recollection of memories and looking back through them with a sense of longing.

Declarations is a painful journey told honestly and in a joyful way that lets the audience walk out of the show feeling cautiously hopeful, particularly after witnessing the play’s conclusion: a collective chanting dance party. We all know death is inevitable – that does not mean it has to be unbearable.