Had we but world enough, and time: Infinity explores the big questions

The concept of time has been debated, theorized, and even denied throughout history by scientists, mathematicians, and philosophers alike. In Hannah Moscovitch’s Infinity the push and pull of time is deeply felt by three characters whose experiences and tribulations in love and intimacy take centre stage. Performed at the First Ontario Performing Arts Centre in St. Catharines in Ross Manson’s Volcano Theatre production, Infinity is emotionally and intellectually complex. 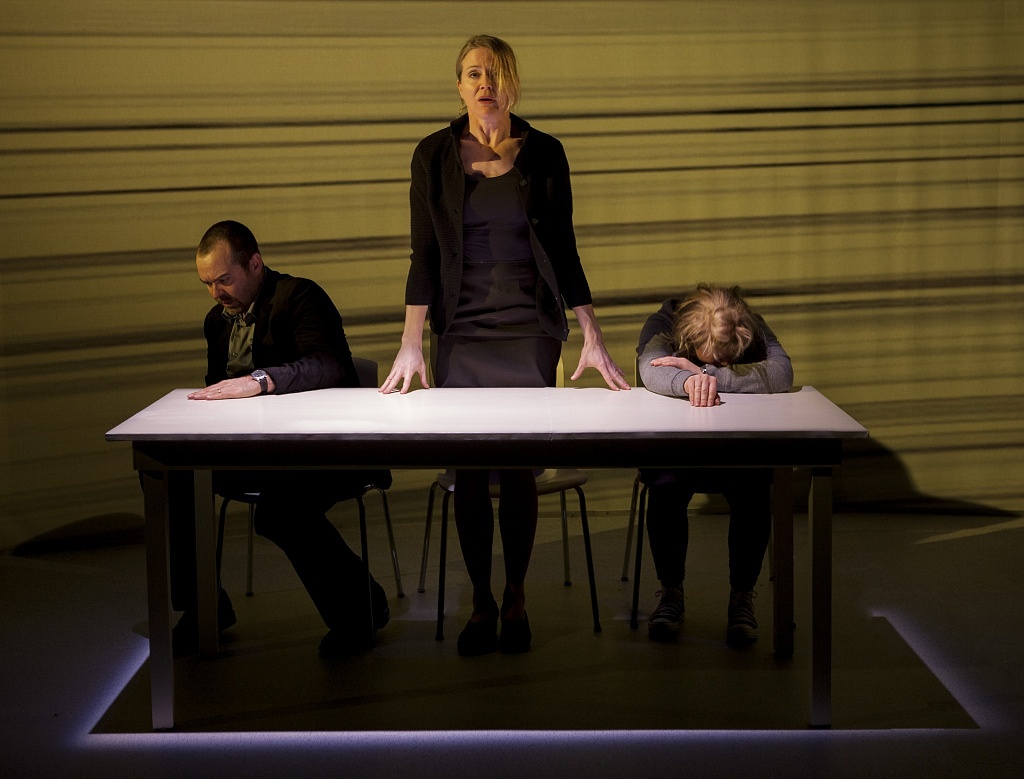 Sarah-Jean (Vivien Endicott-Douglas) is a twenty-something mathematician whose most mind-numbing equation has nothing to do with numbers, but with her own aversion to love. The play opens with her tongue-tied recollection of when she came to realize—or rather, had it pointed out to her by her “blonde American friend”—how “fucked up about love” she is.

Flash back to a chance meeting between graduate students Carmen (Amy Rutherford) and Elliot (Paul Braunstein), studying at opposite ends of the knowledge spectrum—he is a theoretical physicist and she a violinist. They find comfort in one another, as both have grown up in households where love was, and is still, competed for. Flash forward again to the two sitting in a public washroom awaiting the result of a store-bought pregnancy test. It seems that time has slipped from their grasp and they must now make a decision. At first it seems these two storylines are occurring in spite of each other, but it is later revealed that the characters are all connected.

The two narratives contrast in mood and theme. Sarah-Jean speaks directly to the audience and recalls, in an unapologetic, straightforward, and often comedic manner, the chronology of her sex life. Carmen and Elliot’s story is more serious: the audience witnesses their lives moving in together, having a baby, and struggling to maintain their drive and passion for their chosen fields while trying to make each other happy. The differences in tone at times have a jarring effect, but as we witness the stories coming together the play takes a introspective turn.

Violin compositions by Njo Kong Kie, played live by Andréa Tyniec, are a notable element of the staging. Tyniec has a haunting stage presence, as if she were time itself looming and watching over the characters. The only time she appears front and centre is at the top of the play, wearing a stark white dress. As the stories progress, she becomes visible through a screen that is made transparent through the use of back lighting. Her soulful and at times heartbreaking solos bleed seamlessly in and out of each scene transition, the music evoking sorrow, hope, and increasing tension.

The set is simple, accentuating events on stage. Set and costume designer Teresa Przybylski uses stark and off white tones in both the set pieces—a long table and three chairs—and in the large screen that stretches behind the stage. The screen gives the illusion of movement as it is painted with horizontal grey lines—this had an impact on me as an audience member as it evokes, conceptually, the play’s fast-paced events. The characters mostly wear muted grey, white, and brown tones, through which Przybylski offers the audience a contrast to the mounting chaos on stage.

The cast give standout performances and hold nothing back, though the same can’t be said about the character of Carmen. Moscovitch centres the play around Sarah-Jean and Elliot—their aspirations, their passions, and misadventures—but walking away from this performance, the only things I knew about Carmen were that she plays the violin, and feels inferior to her sister who was their mother’s favourite. This left me unsatisfied: there is so much potential for Carmen’s character, but we never see her on her own terms.

Volcano’s production of Infinity left me in emotional shambles (oddly, in a good way). Even if one of the female characters remains underrealized, Moscovitch writes a raw and unfiltered account of a family’s lives as they fight with and against time, creating a theatrical experience that both jars and entices.