A five, six, seven, eight! As a musical theatre buff, I brought high expectations to this show, and it fan-kicked them all the way into the balcony. A Chorus Line was one of the first musicals I fell in love with in high school, and I spent hours pirouetting (badly) around my bedroom to the soundtrack. To say I have an attachment to this music is an understatement; but from the opening chords of, “God I Hope I Get It,” until the “One Singular Sensation” finale, Stratford Festival’s A Chorus Line stunned and delighted.

Directed and choreographed by Donna Feore, A Chorus Line is based on interviews with dancers working in New York City in the ‘70s. It takes place at an audition for the chorus of a Broadway show. Over the course of the audition you hear a personal story from every character, whether it has to do with getting teased for being a dancer, discovering one’s sexuality, getting a boob job, having your first wet dream, or feeling “nothing” in an acting class. This is all delivered through interspersed songs and monologues, along with innovative, high-energy dance numbers. 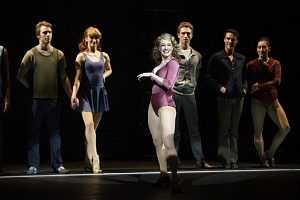 Julia McLellan as Val with members of the company Photography by David Hou.

One of the wonderful things about A Chorus Line is that each character has their own moment to shine. There are no real leads — although there were certainly performers who stand out more than others. Julia McLellan is absolutely captivating to watch as Val. She deliveres one of the most comedic performances I’ve ever seen, performing her solo, Dance 10, Looks 3, with more personality and stamina than I can imagine mustering onstage. Another standout is Conor Scully playing Paul, a dancer who discovers while working at a drag show as a teenager that he enjoys dressing up as a woman. His monologue about having to lie to his parents, and then finally feeling a sense of acceptance from his father, is delivered with so much truth and sincerity that it left me a mascara-stained mess.

A Chorus Line was originally directed and choreographed by the late Michael Bennett, and had its Broadway premiere in 1975, closing in 1990. Up until now there have been strict conditions surrounding the performance rights, including using a proscenium stage and straight lines in the choreography. This is the first time in history that those rules have been amended: the Festival received special permission (after requesting numerous times over the years) to perform the show on its thrust Festival Theatre stage, and to alter the choreography as needed. The effect is tremendous. Taking away the actor/audience separation helps involve us in the stories of these individuals as they go through highs and lows, and ponder the ever-prevalent question, posed to them by Zach (Juan Chioran), the fictional show’s director: “if today was the day that you had to stop dancing… how would you feel?” 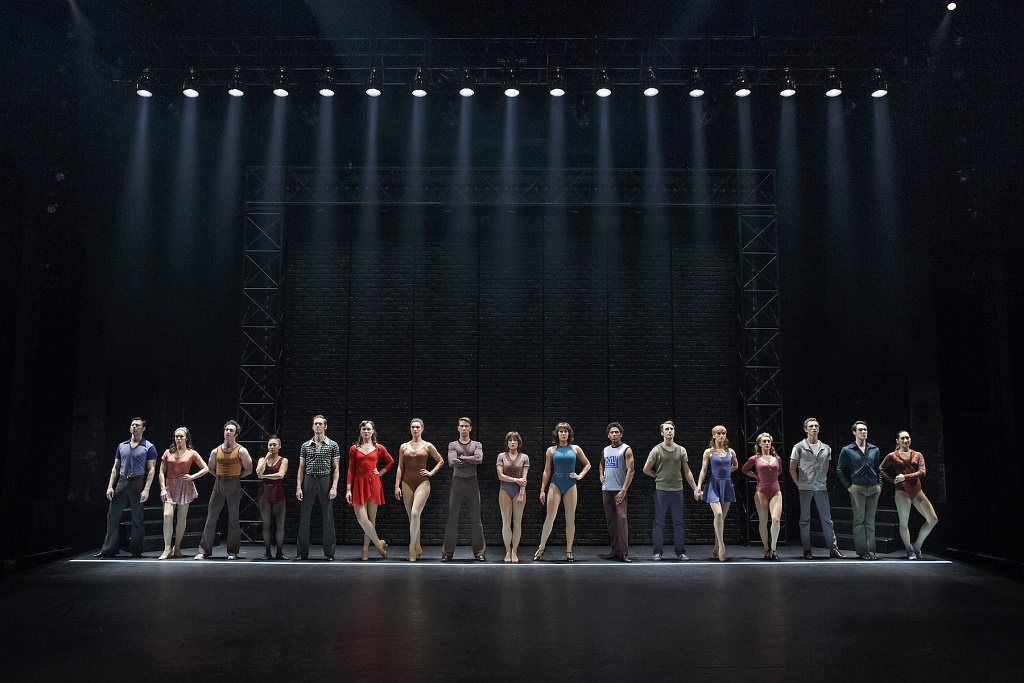 Members of the company in A Chorus Line. Photography by David Hou.

Feore makes full use of the thrust stage and the ensemble knocks the dancing out of the park. Many of the fragmented numbers where characters sing or speak lines out of context are done with the cast members scattered around the stage, with some only a few feet away from the audience. Moments like this make the production all the more personal, and it’s hard to imagine after seeing this production what it would be like in a more traditional staging. This is also aided by Michael Gianfrancesco’s set, simple except for the use of mirrors which appear and disappear as the number calls for it. During Cassie (Dayna Tietzen)’s beautiful solo dance number, the mirrors perfectly capture the emotion behind her dancing, and help everyone in the theatre see her face and her full-body movements, even when her back is turned.

I laughed, I cried, I sang, I tapped my toes, and I deeply regretted not enrolling myself in ballet class 10 years ago. A Chorus Line takes you on a beautiful journey from beginning to end, and finishes you off with a flashy kick-line — sparkles and jazz hands included.