Playing this season at the Stratford Festival, Stephen Sondheim and Hugh Wheeler’s A Little Night Music is dazzling and decadent but is short on a little, well, music — or at least, in some cases, a little musical prowess. A light-hearted romp through the romantic lives of Swedish high society at the turn of the 20th century, Night Music (directed by Gary Griffin) is a soft-hitting exposé of bourgeois indulgence that is all frivolity and fun on the surface. 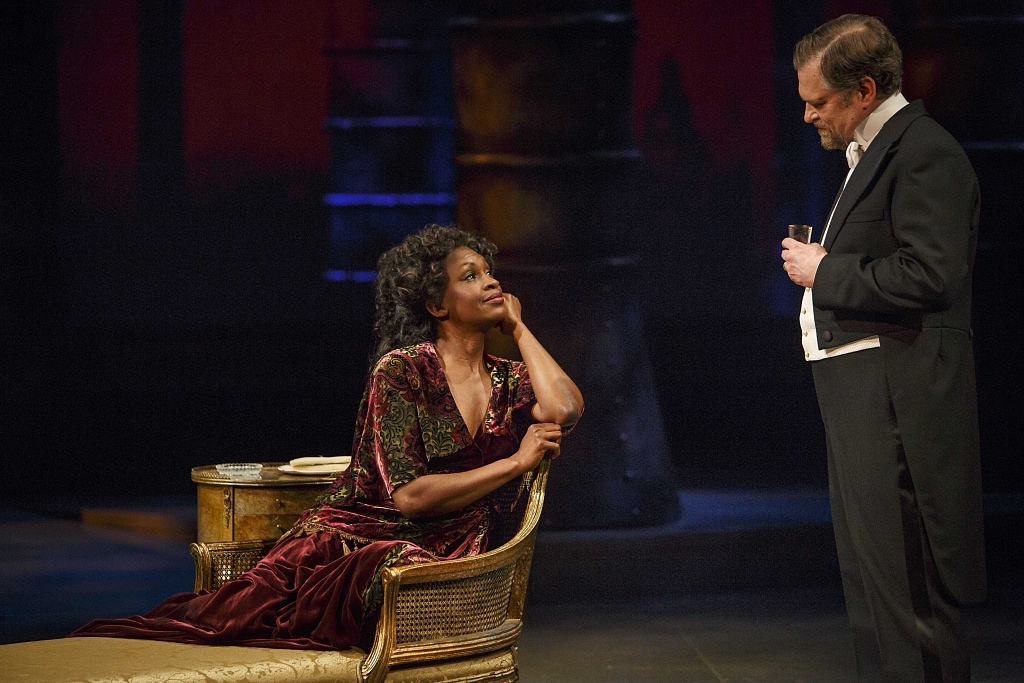 Yanna McIntosh as Désirée Armfeldt and Ben Carlson as Fredrik Egerman in A Little Night Music. Photography by David Hou.

In short, middle-aged lawyer Fredrik Egerman rekindles an intimate relationship with famous actress Désirée Armfeldt when his extremely young new wife, Anne, wishes to remain a virgin for a little longer. Ben Carlson is endlessly loveable as Frederik despite the character’s moral shortcomings, while Yanna McIntosh’s liquid movement and grace as Désirée are enviable, and Alexis Gordon is fresh and entrancing as Anne. Intrigue ensues as Désirée’s jealous lover, the caricature-like Count Carl-Magnus Malcolm (Juan Chioran), enlists his adoring wife the Countess (Cynthia Dale, feisty and heartbreaking) to help him win back his mistress, who now dreams of marrying Fredrik and finding stability for herself and her daughter, Fredrika (Kimberly-Ann Truong). Observed with distaste by Fredrik’s son, priest-to-be Henrik (Gabriel Antonacci), struggling with impious love for his new stepmother, everyone’s adulterous goings-on collide in the countryside estate of Désirée’s mother, Madame Armfeldt (Rosemary Dunsmore). Remembering her own wanton youth, Madame Armfeldt advises Fredrika on life and love. 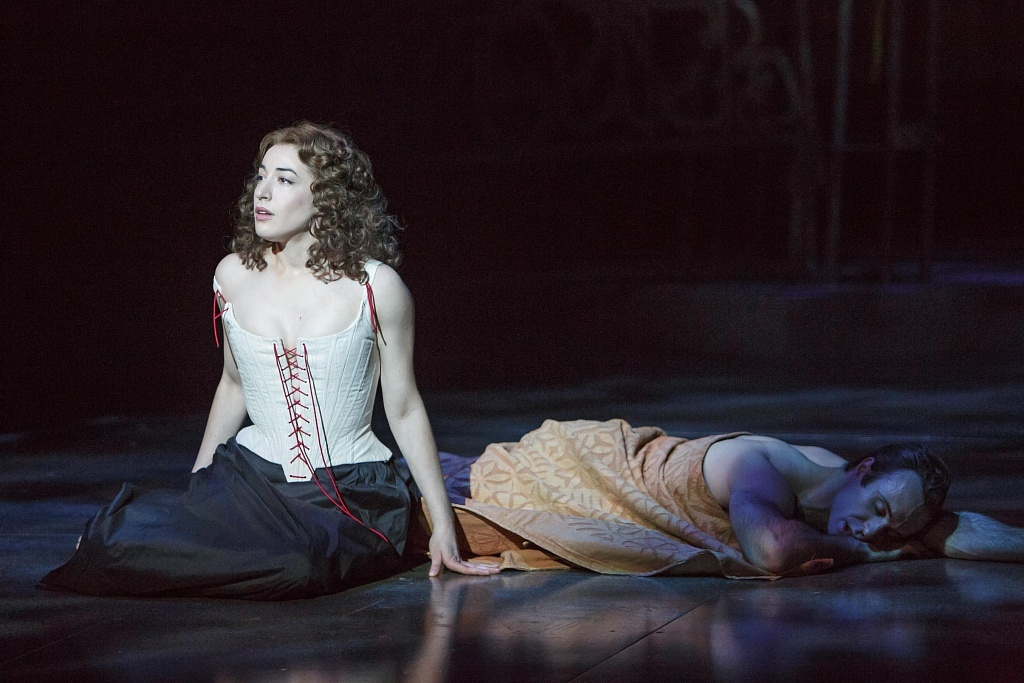 Sara Farb as Petra in A Little Night Music. Photography by David Hou.

Some of the festival’s talented actors have risen to the challenge of Sondheim’s score. Sara Farb (as Petra, the maid) entrances with a crystalline and nuanced performance of “The Miller’s Son.” Dale and Gordon (pictured in the photograph leading this review, by David Hou) pleasure the ears and pain the heart with “Every Day a Little Death,” and the Quintet of choral commentators pull off complicated harmonies with richness and ease under the musical direction of Franklin Brasz. Others, by contrast and quite literally, fall flat. It was upsetting to see the fiery elegance of McIntosh’s Désirée falter when faced with a song. McIntosh’s otherwise flawless interpretation of the dignified diva with a damaged heart disappoints when she is unable to do justice to one of Broadway’s most beloved ballads, “Send in the Clowns” (while there is a history of casting non-singers in this role, the contrast between McIntosh’s acting training and ability and her apparently untrained singing voice glares). It is similarly impossible not to notice Antonacci’s struggles at the top of his vocal range, although for much of his performance there is lovely clarity and honest emotion. Towards the end of the first act the show’s pace slows considerably during Dunsmore’s lacklustre performance of “Liasons.” 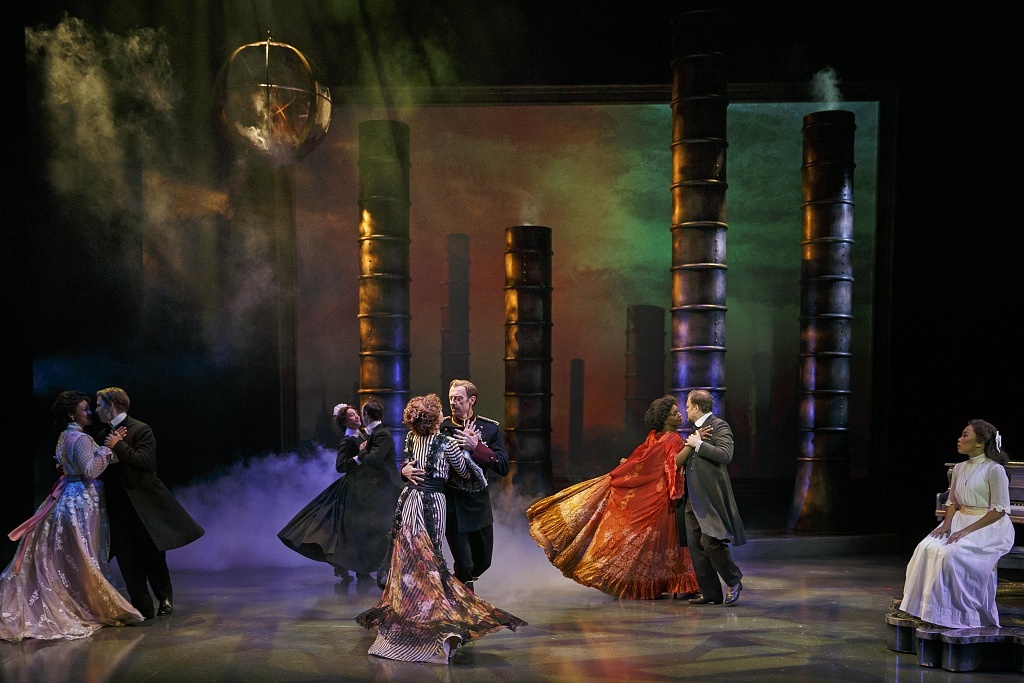 Members of the company in A Little Night Music. Photography by David Hou.

Those hoping to bask in the glow of Debra Hanson’s opulent costume design will not be disappointed. With 36 exquisitely hand stitched gowns and every flounce, frill, and feathered hat you could dream of, the only thing that could dampen Hanson’s design triumph is her set. It is confusing and cluttered, with giant faux-smokestacks and a hyper-realistic projected background. There is perhaps a clever concept here — setting up an urban environment in which societal expectations are upheld and desires restrained to which is contrasted the countryside, where characters have the freedom to act on the love they feel. It is executed, however, without aesthetic awareness and seems at odds with other aspects of the production. In particular it seems hard to believe that costumes and sets are intended for the same world.

This production is luscious and lively but — when it comes to my expectations for the Stratford Festival — musically and visually lacking.