“And what’s a woman worth? What’s life worth? Without self-respect!” These questions are posed in Mrs. Warren’s Profession, directed at the Shaw Festival by Eda Holmes. Sex work and feminism, two of the show’s themes, are hot-button topics in 2016—I can only imagine the taboos against them when the play was first performed at London’s New Lyric Gentlemen’s Club in 1920. The show’s program includes a quote from George Bernard Shaw that gives us an idea of this context: “Ah, when I wrote that, I had some nerve.” 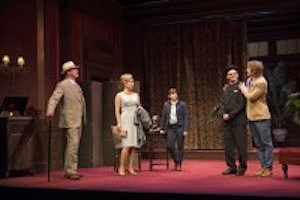 Mrs. Warren’s Profession tells the story of Kitty Warren (Nicole Underhay) and her daughter Vivi (Jennifer Dzialoszynski). Vivi has been brought up in the best boarding schools and attended a prestigious university—but rarely sees her mother. The play begins with Kitty returning home accompanied by two gentlemen friends, the arrogant Sir George Crofts (Thom Marriot) and the kind Mr. Praed (Gray Powell). We also meet Frank Gardner (Wade Bogert-O’Brien) who appears to be smitten with Vivi, though his intentions may not be entirely pure. His father, the Reverend Gardner (Shawn Wright), who may have a history with Mrs. Kitty Warren, soon arrives to further complicate matters. Over the course of the play the secret of Mrs. Warren’s profession is revealed and we see Vivi wrestle to come to terms with it.

The show was brought into the contemporary world by beginning the show with the four men in the cast welcoming us to the New Lyric Club, the site of its first performance. They announce that they will be presenting a staged reading of Mrs. Warren’s Profession. The men work together to narrate and set the scene for the four acts, including telling the audience to use the hashtag “oldest profession” on social media to promote the show. Having men dictate a production that is supposed to be focused on two women was a brilliant directorial choice. It was uncomfortable, certainly, but it also brings attention to the sexism that still exists in 2016. How often, even today, are women’s destinies shaped by men in the theatre, or film? The final image of all four men standing over Vivi was enough to make my skin crawl, and I applaud Eda Holmes and the Shaw Festival for the choice to critique the same theatre pieces that are paying their bills. 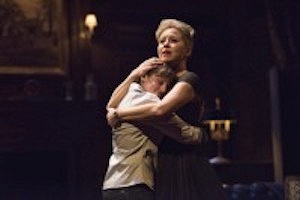 There were several touching moments, particularly with Underhay and Dzialoszynski who both give standout performances. It’s easy for those of us in the audience who can identify as either mother or daughter to immediately empathize with the complexities of that relationship. Wright’s performance was also quite comical as the old Reverend, and his character work was evident, particularly within his vocalization and physicality, which had a stark contrast to that of his character at the gentlemen’s club. While some actors let their accents slip, it should be noted that the different dialects really helped to paint a picture of who these characters are and what their place in society is. Dzialoszynski had an upper-class, more proper English accent as opposed to Underhay, whose accent reflected a much lower class, and lower education level.

Mrs. Warren’s Profession is an enjoyable evening at the theatre and raises questions about the worth of women’s work, whether that is in the sex trade, or a high-powered executive position. I did begin to wonder how many times they could keep talking around the word “prostitute” (spoiler alert: they never say it), given that the play was brought into the contemporary. This does make a good point, though, because even in 2016, people still don’t like to admit that a woman would willingly sell sex, and fewer still will accept that she could actually enjoy it.