Have you ever seen a rabbit with a pocket watch? A singing mouse? Dancing lobsters? The Shaw Festival’s 2016 season and director Peter Hinton invites audiences to witness these and much more curiousness in a reimagining of Lewis Caroll’s classic novel Alice in Wonderland by director/adaptor Peter Hinton. 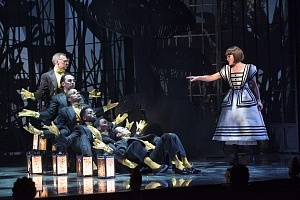 The production tells the story of ten year old Alice Lidell (Tara Rosling)’s adventures within the whimsical and nonsensical world of Wonderland. The addition of musical numbers, mesmerizing visual effects, and beautifully crafted costumes produce an aesthetically pleasing experience—but this dazzling display wasn’t enough to hold my attention throughout the performance.

Hinton’s script follows the novel’s plot: Alice falls down the rabbit hole, consumes the treats that cause her size to fluctuate, meets larger than life characters like the Mad Hatter (Graeme Somerville) and the Queen of Hearts (Moya O’Connell) and through all this eventually finds her way home. With each new elaborate setting introduced, the expectation is set for mounting excitement. Sadly the scenes drag along and I find that I am becoming “curiouser and curiouser” as to when the first act will end. Each scene is driven by Alice’s introduction to a new character, but rather than furthering the story of Alice’s attempts to cope with self-discovery and growing up, the introduction of these characters feels more like a long-winded history lesson. 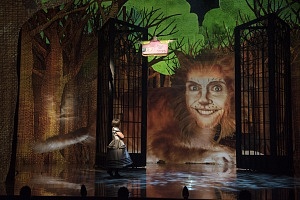 Tara Rosling as Alice Liddell and Jennifer Phipps as the Cheshire Cat in Alice in Wonderland.

The saving grace of this show are design elements that come together to produce pure magic. Through the use of a massive screen upstage the audience is transported to the various enchanting worlds within Wonderland. Projection designers Beth Kates and Ben Chaisson endow each chapter of this story with both still and moving backdrops—from the rippling waters of a serene grove in Christ Church, Oxford to wading through flowers of gargantuan proportion and curious conversations with a grinning Cheshire Cat (Jennifer Phipps).

What truly brings the creatures of Wonderland to life is costume designer William Shmuck’s meticulous attention to each character’s origin and personality. The lush feathers of the uppity Lory bird (Jacqueline Thair) combined with radiant colours of blue, purple, and green produce an air of sophistication and self importance—characters such as this and many more are a visual representation of the diverse personalities that Alice encounters in her adventure.

The extravagant technical elements of this show were enough to spark my interest but the anticlimactic (and at times painful to sit through) story was not enough to hold it. If Peter Hinton’s production of Alice in Wonderland doesn’t have you fidgeting in your seat, it may make you mad as a hatter.