Despite this being the DARTcritics third year covering the RHIZOMES at the In the Soil Arts Festival, trying to review such a diverse collection of interactive exhibits remains a challenge.  Made up of short performances, art installments, and presentations from local artists — housed for the 2016 festival in the Marilyn I. Walker School of Fine and Performing Arts — the RHIZOMES experience is personal to each participant.  This year we decided to write about our individual encounters with the exhibits, as well as provide you with media references to the pieces.  Enjoy!

Caroline Coon writes: The first rhizome I attended was I’ve Looked Everywhere for your Poem, put on by Culture Reject & Dylin North. It took place in a drama studio in the MIWSFPA, and was about ten minutes long. The rhizome began in darkness, and then a band began to play. The musicians placed themselves in between two large screens, and we were invited to use flashlights to create designs or write messages during the first song. We then stood and listened to the next song being played before being escorted out of the room. I loved this rhizome — I felt extremely connected to the performers and the music. The freedom to do whatever we wanted on the screens was empowering!

Sarah Bradford writes: Heryka Miranda’s The Sunflower Man is a stunning dance and spoken word piece that focuses on the importance of giving a voice to migrant farm workers in Canada. The story follows a mighty sunflower who struggles with the elements that work against her—her only friend is the man who cares for and waters her. The mesmerizing dance, combined with rhythmic Spanish music, truly emphasizes the beautiful relationship between a humble farm worker and his crops. 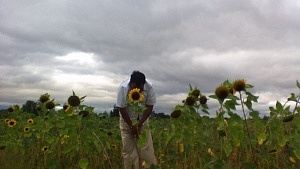 Heryka Miranda – “The Sunflower Man”. Photo provided by the In the Soil Festival.

Barsin Aghajan’s The Norm challenges gender and social norms in an abstract and multimedia performance. The bodies of two naked individuals are projected on two screens as they are buried alive in heaps of clothing—meanwhile, in front of the audience is a performer buried under garments who maneuvers their way through the pile piece by piece. This daring display shocks its audience members by bringing them face to face with the gender binaries that overwhelm society.

Barsin Aghajan – “The Norm”. Photo provided by the In the Soil Festival.

Elizabeth Amos writes: I’ve seen a lot of strange things in the MIWSFPA scenic carpentry, but never anything like the bootcamp Kelly Michuk’s Apillowcalypse Now had in store.  I entered the space with a group of about twelve spectators — who quickly became participants — and we were immediately confronted by a drill sergeant who berated us throughout his attempt to get us battle ready.  After swearing an oath to respect our fluffy weapons we engaged, with commitment, in an all-out pillow fight.  While fun, the piece is also an opportunity to reflect on the early fostering of violent impulses and the ridiculousness of war.

In a dark drama studio I encountered my next rhizome.  Nápoles, a computer-generated video installation by designer Gustavo Cerquera, attempts to capture the essence of the abandoned mansion of the infamous Pablo Escobar.  Using the architecture of the original house, at times the piece felt like a virtual tour — although frequent dips into the surreal made it clear that the attempt to evoke the house’s spirit included more than just the physical.  Sometimes beautiful, and often unsettling, this piece felt like a performance despite its medium. 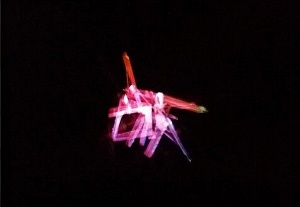 Still from “Nápoles” by Gustavo Cerquera.

Thank you for following our coverage for yet another successful year of the In the Soil Arts Festival in St. Catharines.  Like the RHIZOMES, this festival encourages participants to encounter art and the spaces it occupies in new and creative ways.  This year’s festival may be over but we hope that the imaginative spirit it inspires stays with the city throughout the year.

NOTE: Unless otherwise specified, the photos and videos in this post were taken at the RHIZOMES event by DARTcritics staff on personal devices.

Tags: Art•Brock University•In The Soil•MIWSFPA•Music•Performance•RHIZOMES•St. Catharines
OlderFun at the Festival: “At Wit’s End” is not to be Missed
NewerA Spine-tingling Adventure: Two Takes on DLT’s “That Ugly Mess That Happened in St. Catharines”