Must be heard: Mouthpiece a triumphant exploration of women’s voices — and voicelessness

Rarely have I seen such intricacy in the interweaving of artistry and topicality as in the thundering whisper that is Quote Unquote Collective’s Mouthpiece. Playing this weekend at the in the Robertson Theatre as part of St Catharines’ In the Soil Arts Festival, Mouthpiece appears to tell the story of one woman’s attempt to find her voice in the face of personal tragedy. Performer/co-creators Amy Nostbakken and Norah Sadava combine song, movement, and biting humour in a vocal and physical collage that offers an expression of outrage at the conditioned suppression of female expression, and a requiem for all the women who have lived and died without knowing the capacity to express themselves freely.

What could easily have become little more than an outpouring of anger at the way of the world is delivered by Nostbakken and Sadava satirically, intelligently, and with stunning self-awareness. Speaking to both their political concerns and to their critics, the performers challenge their audience to consider seriously the ways we have been programmed to receive and respond to information by jarring us out of the fiction of the piece with well-timed jabs. In the middle of a speech, for example, Nostbakken breaks off to point out that the audience isn’t listening – they’re thinking about how long her legs are and how revealing her costume is. And it’s true. The audience shares a guilty laugh; we have all been caught. In another instance, audience participation in the shape of two strong men — apparently needed to help move a “heavy” prop piece which we have seen Nostbakken and Sadava move by themselves already and will see them move again — forces spectators to confront that even in the theatre, supposedly a progressive space, we are still suffocated by gendered expectations which equally affect both performance and perception. 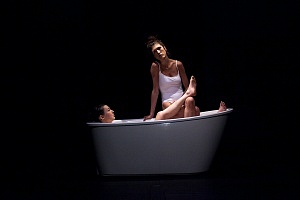 Photos of Mouthpiece by Joel Clifton

Mouthpiece’s political triumph is equalled by its artistic one. From before the time the lights go up on stage, the audience is enveloped by the sound of eerie humming. This sound design (by James Bunton) brilliantly complements the voices of the performers, a necessary strength for a play so directly linked to the abilities and restrictions of the human voice. The set and costume design is simple — black and white with only a bathtub as a focal point — but polished, and directs focus to the actors while still offering endless imaginative interactions for them to play with. The physical work from both performers (movement direction is by Orian Michaeli, and Nostbakken herself directs) is precise and purposeful, the exertion of the women clearly effortful in a way that aligns with the pain of injustice expressed in the piece. Complex ideas — the way in which patriarchal structures force women to subconsciously police their own self-expression, for example — find visual manifestations in the final moments of the play. Though the final image is that of a woman’s silent scream, Mouthpiece speaks loudly and clearly.