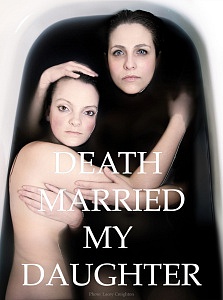 Stepping into the Dramatic Arts theatre, I didn’t know what to expect; but I certainly didn’t anticipate a show presenting opera, babies, feminism, and machine guns.

With a cast of two and a handful of props that can fit into a tiny suitcase, Death Married My Daughter takes you on a journey with Desdemona and Ophelia, two poorly treated women from Shakespeare’s tragedies. They are returning from the dead to find closure after their untimely deaths, which were caused at least in part by the men in their lives. There was something incredibly satisfying about seeing these two women, so often overlooked in their own stories, take complete control and own the stage, even if it was 300 years after their fictional deaths.

Nina Gilmour (Desdemona) and Danya Buonastella (Ophelia), completely won over the audience with their skills in the Bouffon clowning style. Bouffon is a theatre form that represents controversial and timely issues relevant to society in a mocking manner that is likely to upset and offend the audience, or at the very least, make them feel extremely uncomfortable. Throughout the hour-long show, we see our two heroines explore the state of the world, with a focus on feminism and how it has progressed throughout the past hundred years. They impersonate well-known people like conservative political and social commentator Ann Coulter, and speak text from the SCUM Manifesto written by Valeria Solanos, a more obscure radical feminist. In addition the make several very current references including one to Donald Trump that elicited a huge reaction from the audience. Though the performers switch characters multiple times throughout the performance, it is usually clear when it happened, due in part to their excellent skills at changing their physicality and voices to match their new identities. Both actors trained in Bouffon at the Ecole Philippe Gaulier in Paris, and the high degree of instruction they received is evident as the show progresses.

This show was written by the two directors, Michele Smith and Dean Gilmour, along with the two actors, and we learned in the talkback that many of the ideas came directly from improvisation in the rehearsal room. The satirical and in your face nature of the show paired with the commentary it made on the patriarchy makes it one of those rare theatre experiences that leaves you thinking about it for days after. Death Married My Daughter was an experience like no other I’ve been privy to in the theatre. It is jarring, uncomfortable, and mildly offensive— but since that was the intent, it is clearly successful.

Alright folks, this is it! In one corner we have Desdemona and Ophelia. They’re back from the dead and ready to dish out a beating. In the opposite corner we have the big bad patriarchy and it doesn’t intend to budge an inch. Let’s get started. Ding ding ding!

In Death Married My Daughter, Shakespeare’s heroines Desdemona and Ophelia are resurrected and seek closure in the wake of their tragic deaths. This “closure” involves the gleeful and unrelenting disassembling of patriarchal society. In the show’s just under an hour long run time, performers Danya Buonastella and Nina Gilmour and directors Michele Smith and Dean Gilmour treat audience members to a notably flawed yet unforgettable experience.

Let it be said that this piece is intended for mature audiences only, as the actors display a no holds barred performance style. The majority of the shocking subject matter is extremely effective in serving a biting satirical purpose. This being said, certain satirical moments are neither clever nor necessary and rather shallowly seem to fill a purely comedic “I can’t believe they just did that!” quota. An example of this would include the various Hitler references made throughout the play. References to Nazism and Hitler are grossly commonplace in the genre of satire and it’s disappointing to see this largely unique piece rely on such a clichéd and uninspired tactic.

On a more positive note, the performances are expertly crafted. A particularly moving scene is when Gilmour acts as a puppeteer for Buonastella. Gilmour stands behind her fellow cast member, guiding and mimicking her every action from the delivery of lines to interpretive arm movements. The amount of precision and kinesthetic control displayed by both actresses in this section of the play can only be properly described as surreal and captivating. This scene also wonderfully reinforces the unsettling mood of the show.

Upon leaving the theatre after experiencing Death Married My Daughter, I discovered that the play had left a strong impression in the minds of all my fellow spectators. Some accused the piece of being overly crass and man-hating. Others praised the piece for tackling pressing gender issues in an authentic manner. Amidst all these contrasting opinions, one thing remains undeniably true regarding Death Married My Daughter: any play capable of eliciting such palpable and varied responses is well worthy of exploration. If you’ve got the stomach for it, see it ASAP.

Back in July, DARTcritics’ Alex Jackson reviewed “Death Married My Daughter” at the St. Catharines In the Soil Festival.  You can read his review of the production here: http://dartcritics.com/2015/04/25/dying-of-laughter-death-married-my-daughter/