Virtually Visible: “The Second Life” is Worth a Second Look

For those who have already seen numerous Tottering Biped Theatre (TBT) productions, expectations for The Second Life were high, and it does not disappoint.

This is a devised theatre piece that was developed through four years of actor and playwright improvisation. The Second Life has been touring across Ontario for the entirety of its development, with a stop at Brock University two years ago — though then was titled The Inconsolable Blueness of Jeans. The Second Life certainly rolls off the tongue easier.

In its current iteration, the reality-bending show depicts the fractured story of Jessica (Julia Krauss) desperately searching for her sister in the virtual game world of Second Life, while a former police officer (Zach Parsons) she has recruited to assist her search deals with his own demons. With a cast of just three people and running only an hour and five minutes, the tale woven by director and playwright Trevor Copp is intricate yet clear and is as mentally stimulating as it is visually stunning.

In a talkback the audience learned that the actors were given cheap flashlights and asked to experiment until they were all satisfied with the effects. The resulting use of light in the production is equal parts ethereal and an epilepsy risk. From LEDs strapped to pool noodles, to finger lights, to a plastic Dollarama bowl dancing atop a flashlight, the ingenuity of the cast and crew in their lighting design is impressive to say the least.

Performing in a small space is not unusual for a TBT production. However, the dimly lit playing space makes it more difficult to involve the kind of physical staging that audiences have come to expect from Copp’s shows. While The Second Life still offers impressive moments of staging — Jessica swimming through the air in the opening scene of the show immediately springs to mind–this aspect falls flat in comparison to the previous version of the production that included much more dance-based movement and less dialogue. In its previous version, for example, the company told the story of Parsons’ troubled police officer solely through movement.

Taking a trip to the Burlington Performing Arts Centre is well worth it for The Second Life, not least for its striking final image of Jessica’s lifeless face distorted in a pool of water. After a little over an hour of her search, we’re left with a pale reflection of the character she once was as well as many questions including what, exactly, constitutes reality?

In The Second Life Tottering Biped Theatre company and director Trevor Copp have created a show that ultimately thinks itself to death. A clever use of low-budget lighting, hypnotic movement pieces, and a poignant message about the subjectivity of reality battle with unnecessary confusion and odd staging throughout the production.

The plot follows the emotional journey of Jessica, a grieving young woman (Julia Krauss), as she tries to locate her missing sister in the digital world of the game Second Life. She employs the help of the hacker Nathan (Zach Parsons) and his guilty conscience (Jenna Harris) to locate her sister. As it wades through the digital world the play wrestles with notions of emotional reality and mental illness. Are emotions experienced in the real world more valid than those experienced in the virtual? 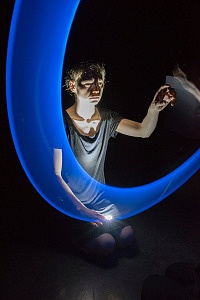 From the very beginning, the play is beautifully choreographed. A swimming scene in which Krauss is seemingly suspended in the air creates a tranquil, slightly hypnotizing moment. The entire show is lit only by tools used by the three actors themselves, ranging from single LED lights taped to a pool noodle to flashlights shining through bowls of water to create the feeling of being poolside. Two small, multi-purpose blocks, like the tiles in the video game ‘Tetris’, are the only set pieces.

Copp’s staging, while dynamic, is burdensome to the production. The audience has to take time out of understanding an already fast-paced script to decode what a set piece or prop represents. For example at one point the actor playing Nathan swings the aforementioned pool noodle continuously in a circle. In the darkness, the bright blue lights attached to the noodle create a circle resembling the spinning circle which visually indicates a computer is loading. While this creates a striking image, decoding it also deflected the audience’s attention from the dialogue in the scene.

A lot is asked of the three performers in filling the roles of stage hand and lighting technician as well as actor. For their part Krauss, Harris, and Parsons do justice to the emotional tone of the show. There is not one single forced emotional response or lack of commitment in this trying piece. Parsons’ guilt, stemming from an unspeakable act he committed in the real world, is so tangible that he is unable to escape it even in the virtual world. Krauss plays her fracturing mental state deftly and with increasing urgency. But this is undercut by the distracting moments of trying to understand whether an event is happening in the real world or the virtual. This is precisely what the show is striving to achieve, but the results are mixed.

The speed at which the production moves proves to be its undoing, as it leaves the audience with more questions about the staging than thoughts about dealing with mental illness in the digital age. It is a show worth seeing twice, but not worth seeing once.