Johnathan Clancy writes: Four little girls dare each other to enter the home of a deranged, reality-bending clown. What could go possibly wrong? Such is the premise of the big budget recital that is Zacada Circus School/Zacada Entertainment’s Circus Labyrinth, which offers a wealth of impressive moments of spectacle. The production played at the Milton Centre for the Arts on October 17-18 this year.

Circus Labyrinth, written by David Fancy and directed by Fancy, Kosta Zakharenko, and Christine Cadeau follows four preteens as they are trapped in the home of The Minotaur (Sean Rintoul), an artistic puppeteer intending to conquer the world through kidnapping and transforming one contortionist at a time. Our heroines are forced to take action against the vile clown to end his plot before finding a way out of the living nightmare that is his house. But to do this they must first evade the enslaved performers that the Minotaur sends after them until they can find a way to free them.

Sean Rintoul as the Minotaur. All photos by Kien Tran.

Zacada founders Zakharenko and Cadeau are former members of Cirque du Soleil, and it shows. The performances are all very different, yet uniformly astounding. The audience gasped and “ooooed” at the skill and talent showcased, and I found myself tensing with anticipation and excitement as performers contorted, danced, and trapezed across the stage. A personal favourite was the young contortionist Quinten Melo, whose flexibility had me cringing for the sake of his spine as he pulled his legs over his shoulders, lurched backwards to grasp his own ankles from behind, and assumed various other impressive positions. From the audience I could hear similar sounds of shock as the young man contorted our preconceived notions of the limits of the human body.

The four heroines themselves worked together on the trapeze to form different positions that intertwined and balanced each other. Imagine hanging from the monkey bars as someone else hangs off of you. I was on the edge of my seat through it. Rintoul performs on stilts as The Minotaur, and his bombastic pronouncements on how he will transform the world always add a laugh to transitions between circus acts.

Circus Labyrinth is designed to show off circus technique more than anything else, but it will a-maze you.

Sarah Bradford writes: As house lights go down on Zacada Circus School/Zacada Entertainment’s Circus Labrynth, the menacing gaze of the Minotaur’s eye is projected on the stage. The eerie music and backdrop of a decaying house promise the audience a spine-tingling evening. Unfortunately this promise becomes lost in a labyrinth of its own upon the entrance of the four heroines, whose journey weaves together the show’s various circus acts.

Written by David Fancy and directed by Fancy, Christine Cadeau, and Kosta Zakharenko, Circus Labyrinth follows four young girls (Jenna Wile, Ella Quinn, Paige Johnson, and Tori Elliot) as they search for Steven (Quinten Melo), who has mysteriously vanished into the house of the Minotaur (Sean Rintoul). Through a wide-ranging series of acrobatic performances, featuring trapeze, contortion, silks, and jump rope, the audience is guided through the world the Minotaur has created to capture all things weird and whimsical and eliminate the dull banality of modern life.

Upon hearing the first bits of dialogue the ears are assaulted by inauthentic, exaggerated, and dry utterances that leave adult audience members feeling alienated. Although the show is geared towards a family audience, the attempt at engaging audience participation feels more like condescension. While the Minotaur’s dialogue serves as a transitional storytelling element between each circus act, the heroines’ dialogue mostly consists of hollering obscure pop culture references and detracts from the mystery of their mission. 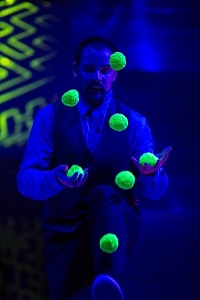 The production’s saving graces are the awe-inducing acrobatic performances and harmonized technical elements. From juggling seven balls at once to contorting the body mid-air inside a hollow cube, the inspiring young acrobats leave their audience gasping and cheering for more. The Minotaur’s juggling sidekick Diablo (Jorden Moir) dazzles with a seven-ball spectacle using his hands, feet, legs, and head. Set and lighting designer Zakharenko and sound designer Stephen Chan work cohesively through the use of colour, lighting isolation, and music composition to set the mood for each performer’s act.

Strip away the acrobatics and Circus Labyrinth is a cheesy children’s play lacking substance and originality. Strip away the dialogue and the production takes audiences of all ages on a personal journey through its labyrinth and adds a greater air of mystery and wonder. Together these elements may not produce the cohesive production it aspires to be, but Zacada’s Circus Labyrinth is well worth the journey if a recital of spectacle and young acrobatic talent is what you seek.