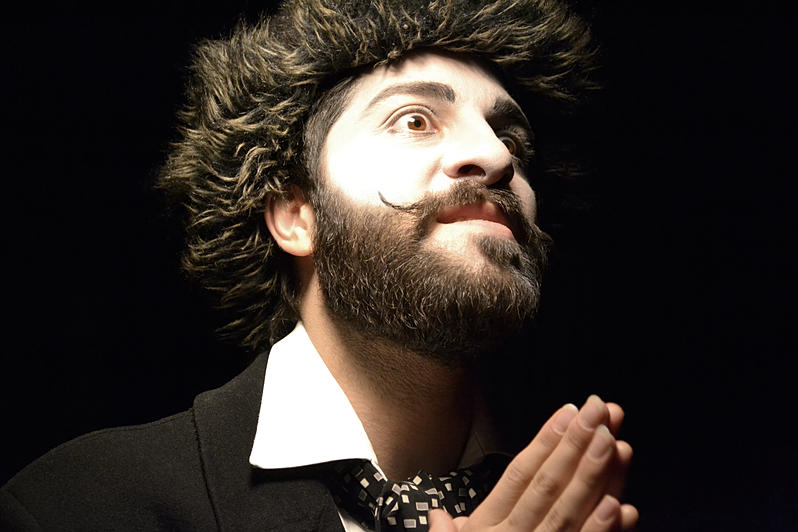 Elizabeth Amos writes: Dostoevsky’s psycho-neurotic comedy found twice the thrills, chills, and chuckles in Bad New Days’ metatheatrical adaptation of the The Double at the Sean O’Sullivan Theatre. Collaboratively developed by director Adam Paolozza, Arif Mirabdolbaghi, and Viktor Lukawski, all playing dual roles as co-adapters and performers, The Double is an exercise in suspended disbelief which tests the audience’s willingness to accept their given reality.  Ultimately, duplicity evolves between our struggle to make sense of the nonsensical as an audience, and Paolozza’s character, Golyadkin’s struggle to secure reality.

The Double follows Golyadkin – “our hero”, as the double bass playing narrator of the sotry (Mirabdolbaghi) calls him – and his spiral towards a mental break. He is convinced that a second version of himself, albeit younger and more successful, has been interjected into his unremarkable life with the purpose of destroying him. Through a series of interactions with the many important men in his life, all played by the dextrously versatile Lukawski, and the one highly sexualized woman, played by a string instrument, Golyadkin is dragged down by his own self-doubt and his infernal optimism. Our boundaires of reality are tested again and again as the narrator travels, seemingly through time and space, within and without of the story world. Mirabdolbaghi, first and foremost a talented musician, makes the transition with ease; he plays actor, accompanist, and the audience’s accomplice without causing any of the confusion clearly felt by Golyadkin amonst the spectators.

Stylistically, The Double’s employment of visual half-truths and complex, disciplined physicality is what makes the production unique amongst masses of cerebral, comedic, quasi-misogynistic European classics.  While initially unappealing, the bland set design (Ken Mackenzie) of rumpled curtains and simple furniture functions both practically and creatively, mirroring the bare bones spectacle of the performance and reflecting Golyadkin’s disheveled and uncomfortable psychology.  The resulting effect is the detachment of spectacle from story in a way that fascinated and captivated audience members around me, who voiced their appreciation through laughter and the occasional gasp of approval.  The gimmicks and physical intricacies contributing to the amazingly high quality of the performance stand out in stark contrast to their surroundings, indicating an artistic team with an eye for detail that is conscientious of playing to their strong suits.

Overall, so creatively satisfying was my reception of this production that, had I a double, we would have both been in the audience that night. 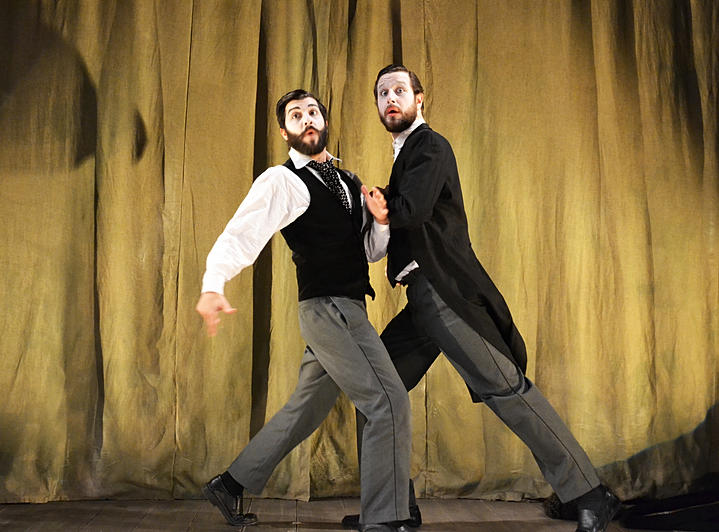 Sean Rintoul writes: Bad New Days’ The Double: doubly racist and doubly sexist as its counterpart in 1846. On January15 Bad News Days performed their theatrical reworking of The Double at Brock University’s Sean O’Sullivan Theatre. The play revolves around Golyadkin (played by director Adam Paolozza) and follows his drift into madness as he encounters his Doppelganger — his double. Bad New Days took Dostoevsky’s novel and transformed it into a Commedia Dell’Arte-style performance packed with slapstick comedy and over the top characterizations that were theatrically compelling. Actors Viktor Lukawski and Paolozza gave incredible physical performances through their detailed use of mime and were complemented by an impressive live musical score by double bassist Arif Mirbdolbaghi.

The creative choices were clear and the physicality was outrageously funny, but they ignored the minoritization of non-whites and sexism that is embedded in Dostoevsky’s novel. A truly original adaptation would challenge these concepts and offer audiences an updated story that works against representations that are problematic to a 2015 audience. Representations of gender were one of the big problems. The double bass, for example, represented Klara, the sexualized lover of Golyadkin. Having Klara be represented as a musical instrument that makes sounds when she is plucked reads that women are to be used as material objects. Non-whites are also minoritized by the derogatory comments about the Turkish and how they can’t stand up because they drink too much. The text places Turkish culture as lesser then Russian as it stereotypes Turkish people as alcoholics. Because this isn’t commented on, or brought to the attention of the audience, it comes off as just plain offensive. All the company needed to do was at the very least use theatrical conventions such as breaking the fourth wall to quote the offensive material rather then to perpetuate it. Their text is problematic and I was disappointed that these emerging Canadian artists ignored offensive representations that translated themselves onto the stage.

The company did give us an entertaining night of theatre, full of laughs and gags that almost make the show appropriate for all ages. But in terms of an original revision they prioritized creativity over rewriting sexist and discriminatory moments that stain the pages of their script. Rather then giving a university audience a night of entertainment balanced with an educated rewrite, Bad New Days gave us bad news by trying to sweep problematic material under the carpet with gags and farce.