Brimful of Samosas: “Family Theatre” as you’ve Never Seen it Before 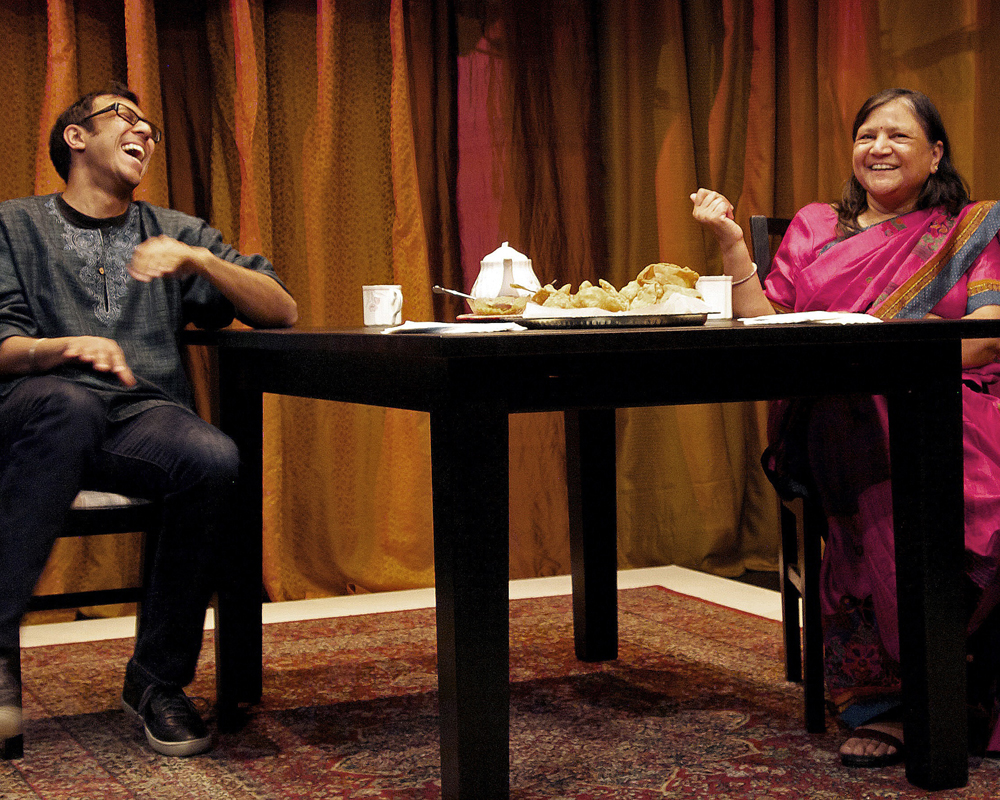 Why Not Theatre’s celebrated production, Brimful of Asha, visited the Courthouse Theatre in St. Catharines in late October for one night only, and the DARTcritics were among the lucky few to snatch up tickets (and the snacks that came with them!). Here are two of their reviews:

Jeremy Knapton writes: Some have said that there is little stronger than the bond between a mother and her son. If searching for proof, look no further than A Brimful of Asha, an unconventional and hilarious little show featuring a disgruntled son and his stubborn mother.

The setup is fairly simple: there are two performers, Canadian-born Ravi Jain, who is also the director of the show, and his mother Asha, who was born in India; the family now lives in Toronto. Together, the two recount Ravi’s experiences with love and marriage — namely the many moments involving Asha’s constant, invasive interference in the matter. Ravi is frustrated at his mother’s persistent attempts to force an arranged marriage on him, while she is firm and unmoving in her commitment to tradition. This conflict between the two forms the basis of the performance, as well as many funny and sometimes emotional interactions to follow.

Before the show even gets underway, Ravi reveals his theatrical background to the audience while Asha insists that she’s not a performer. Really, one can be forgiven to think otherwise, both of them are so charismatic and enjoyable in their own right. Ravi is a fast talker, but he’s also very down to earth and conversational, and his sense of humour shines during the many times he recounts his relationship stresses.

Asha doesn’t talk nearly as much as her son, but what she does say is often sheer gold. Her sincerely deadpan delivery is capable of sending the whole audience into hysterics, as is her wide, yet clearly judgmental smile. By the end, it seems like the whole audience has known and enjoyed the company of these two far longer than they actually have.

Rather than calling this a play, it might be more apt to call it a sort of formal presentation. Ravi and Asha don’t move a lot, and the set, consisting of a single table and a video screen at the back, is minimalist to a tee. Ravi and his mother talk casually, almost as if they’re just having another conversation at home, with the audience acting as welcomed guests in their midst. The resulting experience actually becomes quite refreshing. Everything about the show feels intimate and natural, even when complicated dramatic moments are being explored. The space created is completely unrestricted, a testament to the show’s overall good nature.

It’s hard to think of A Brimful of Asha as a theatrical production; it’s probably viewed as an unconventional social experience. Come for the delicious samosas passed out during the pre-show. Stay for the undeniably charming chemistry between a passionate young man and his equally passionate mother. 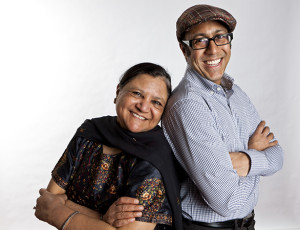 Christian Lange writes: A Brimful of Asha is not only a quirky, thought-provoking, mother-son endeavor, it’s a barrel-full of laughs and a belly-full of samosa! Audience members are warmly greeted by Ravi Jain and his mother Asha and invited up on stage to help themselves to samosas awaiting them on a kitchen table in a homey, red and golden stage environment, designed by Julie Fox. First impressions might have been that the actors were introducing themselves in character, but once the show begins, it becomes apparent that none of it was a sham, or traditional theatre as we might call it. The man’s hand we just shook was the director’s, and the woman’s, his biological mother’s.

While the entire audience devour their snacks, Ravi and Asha begin explaining the nature of the performance we were about to see. “This actually happened!”, Ravi insists, explaining that his ludicrous tale of maternal marriage-meddling would be told from both his and his immigrant mother’s perspectives, so that we, the audience, can decide who was justified and who was in the wrong. Asha confides to the audience in her broken, but perfectly understandable and charming English, that she is new to the stage, and instantly wins over the audience with her snarky yet motherly corrections of her son’s every explanation.

The storytelling kicks off with Ravi leading the charge, recounting the hilarious and unbelievable antics of his parents’ increasingly depraved attempts to find him a wife. Throughout the night Asha undermines her son’s protests of arranged marriage with cheery, self-serving quips, all the while with a grin on her face. Occasionally Ravi allows her to elaborate on her side of the story and her point of view. Re-enactments of actual events, and natural conversation with the audience, reinforced by Beth Kates’ nostalgic, photo album-esque video design, get blended in the story telling, and it begins to feel like the story is not merely being told, but occurring while the audience watches, leaving them eager to hear what comes next.

A Brimful of Asha is an incredible piece of theatre because it portrays the clash of cultures and of generations with ease, but what makes it truly incredible is that it is simply a dramatic re-telling of a true story. It reminds us how these themes and ideas we bat around as outside ourselves are deeply ingrained in our daily lives; you just have to tell your story to see the complexities and value.

So come let Ravi and his enchanting mother tell you their story about A Brimful of Asha. You’ll have to eat your samosa quickly though; before long you’ll be laughing too hard to finish it.